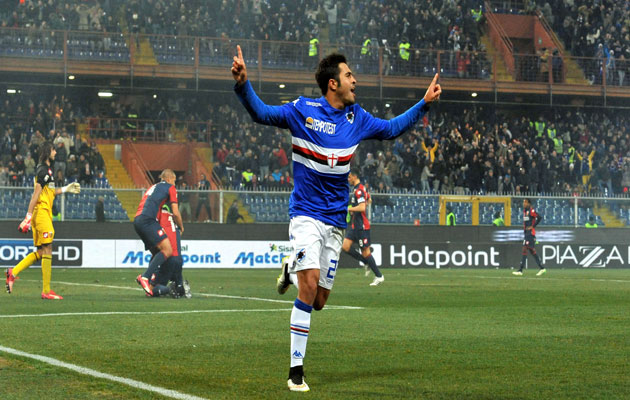 Italo-Brazilian Eder celebrated his call-up to the Italian national squad for next weekend’s games against Bulgaria and England in the best possible manner when scoring Sampdoria’s 65th minute winner in their 1-0 home defeat of Inter on Sunday night. In so doing, 28-year-old Eder rounded off a miserable week for Inter who, of course, were eliminated from the Europe League in midweek, beaten 5-2 on agregate by German side, Wolfsburg.

In contrast, Eder was confirming the sort of form which has made him a key player in Sampdoria’s excellent season which sees the Genoa side now fourth in Serie A on 48 points, four behind third placed Lazio and one ahead of fifth placed Napoli. Having started his professional career with Criciuma in Brazil, 28-year-old Eder has been in Italian football for nearly ten years, during which time he has played for Empoli, Frosinone, Brescia, Cesena and Sampdoria.

Since joining Sampdoria three years ago, Eder has looked more than useful but like many of the Sinisa Mihajlovic coached team, he has been playing his best football this year.   Eder, of course, comes with a “heavy” name.   Remember, there was an Eder who strutted his stuff alongside Falcao, Zico, Cerezo, Junior et al in that mythical Brazil 1982 side.

That Eder was something of a free kick specialist. So it was only fitting that Sampdoria’s modern-day Eder should wrap up Sunday night’s game with a masterpiece of a wickedly outswinging 30-yard free kick that left goalkeeper Samir Handanovic no chance as it smashed off the inside of “his” post.

A staunch believer, Eder used Instagram to thank God after he had scored a winning goal against Verona last season, signing his entry, “Obrigado meu Deus!!” (Thankyou My God). Reports suggest that the first thing he will do on returning from his first ever call-up to the Italian team will be to visit the Marian shrine of Madonna Della Guardia, close to Genoa.

Interestingly, Eder is not the only new name in the 26 player squad that Conte named for the European qualifier against Bulgaria in Sofia and the friendly against England in Turin.   Also summoned are another “oriundo”, Palermo’s 26-year-old Italo-Argentine Franco Vazquez as well as Empoli’s 28-year-old midfielder, Mirko Valdifiori, both players whose good form this season also merits a call-up.

It seems unlikely, however, that any of the above will start against Bulgaria as Italy look to maintain their position joint top of Group H with Croatia. One of the “new” boys, perhaps Eder, could however get a run-out against England. 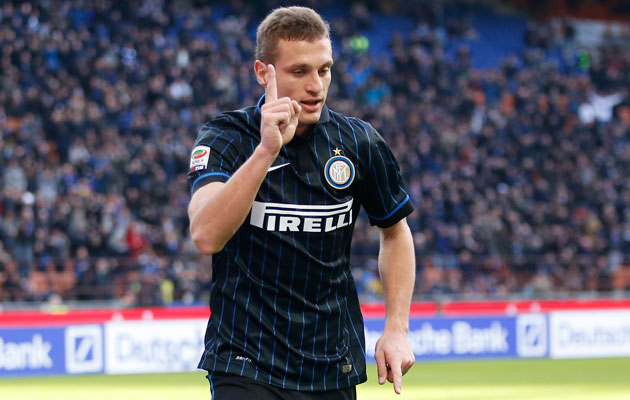 Eder’s goal inevitably turned an unwelcome spotlight on the failings of Roberto Mancini’s Internazionale, now in lowly 10th place in Serie A, no less than 30 points adrift of league leaders, Juventus. For a side that started out with Champions League qualification as a major objective, Inter now look as if it will require a mini-miracle for them to make the Europa League.

After that midweek exit to Wolfsburg – Inter’s fourth defeat in their last six games – Indonesian owner Erick Thohir made it clear that, as far as he is concerned, the Europa League must remain a seasonal target.  Mind you, at this point, that is the only possible target left for them. As of now, it is not clear how many of the Inter fans agree with coach Mancini, who argued that his side had dominated with 69 per cent possession against Sampdoria and had deserved to win.

“I’m not particularly happy with the last month,” Mancini said. “We’ve lost games that we didn’t deserve to lose but, in football, there are moments when everything goes wrong for you.”

One suspects that the Inter fans are more likely to agree with his midweek assessment of the team’s crisis when, in the aftermath of the 1-2 home defeat to Wolfsburg, he said: “Sometimes, there are matches where your will to win counts a lot more than your technique and I would have to say that this was a game where we didn’t give it 100 per cent.”

With a view to the future, rumours up at Appiano Gentile suggest that ex-Manchester United defender, 33-year-old Nemanja Vidic, will be on his way at the end of the season. It seems that he took exception to Mancini’s bitter post-match tirade against all the team in the wake of the Wolfsburg defeat. Even if this argument did not cost Vidic his place in the team against Sampdoria on Sunday, it certainly does not help his (already uncertain) prospects of staying at Inter for next season.

Some good news in these not always wonderful Italian times. With three Italian clubs still in European competition – Juventus in the Champions and Fiorentina and Napoli in the Europa League – Italy’s UEFA ranking may be in danger of a sudden, much needed hike.

On that same note, however, one can only be a little concerned with the widespread media reaction to Juve having drawn Monaco in the quarter-finals. “The Big Prize For Juventus”, headlined “Gazzetta Dello Sport”. This was obviously a reaction based on total relief that the Old Lady had not drawn one of the much-feared Big Three, namely Bayern Munich, Barcelona and Real Madrid. However, let us hope that relief does not turn into overconfidence…

The other item of good news concerns the national team for which the Football Federation has just concluded a new four year contract, 2015-2018, for 134 million euros, more than a 10 per cent increase on the previous contract.

It seems that, despite everything, there is nothing which can guarantee an Italian TV share like the Azzurri whose last big international “moment”, their Euro 2012 semi-final win against Germany, registered a national audience of 20 million.

Roll on the European Championship in France.