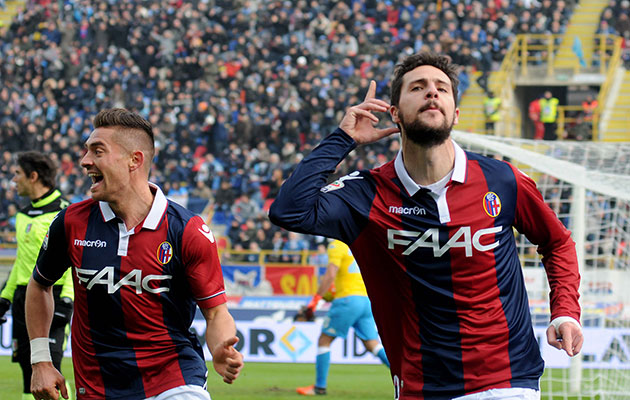 For the fifth time in the last six weeks, the leadership of Serie A changed hands last weekend when Napoli’s 3-2 away defeat by Bologna knocked them off the top of the table in favour of Inter, 1-0 Saturday winners against Genoa.   All this just one week after Napoli beat Inter 2-1 at the San Paolo to claim the No. I spot for the first time in 25 years.

At this point, it hardly requires the powers of Einstein to conclude that this is one of the most wide open championship contests in years.   Whether the closely contested nature of this season’s campionato depends on an overall improvement in the quality of Serie A football, as sustained recently by no less than former Milan and Italy coach Arrigo Sacchi, remains to be seen.

Less optimistic observers might argue that the close-run nature of Serie A this year indicates that the campionato has changed status, that it has become a highly competitive, lower standard handicap rather than a Group 1 classic.   We have our doubts but some indication of where we stand could come from another busy week of Champions League and Europa League action.

Last season’s Champions League finallists, Juventus, are already qualified from Group D but they travel to FC Seville looking for the draw that would guarantee them top spot in the group and consquently a second round seeding that sees them avoid other Group winners such as, above all, Barcelona or Bayern Munich.   Lest anyone had doubts about Juve’s return to form, their utterly emphatic 2-0 dismissal of Lazio last Friday night removed those.  Not only Seville but also the Old Lady’s Serie A rivals such as Inter, Fiorentina and Napoli have reason to be worried.

Italy’s other remaining Champions League representative,  Roma, go into their final Group game in a much less rosey position.  On paper, their task looks far from insuperable.   They need to beat Belarusian side Bate Borisov at home to be sure to finish second to Barcelona, even if a draw may suffice.

Reservations about Roma relate to the fact that they are playing like a team still shell-shocked from that 6-1 drubbing at the Camp Nou two weeks ago.  In their two league games since then they have lost 2-0 to Atalanta and drawn last weekend 1-1 away to Torino.   That latter draw highlighted the club’s current problems with a 94th minute defensive error by German Antonio Rudiger leading to a penalty, scored by Argentine Maxi Lopez, that cost Roma two points.

Nor will it help shakey nerves to recall that in the first leg of this tie in Belarus, Roma started so badly that after half an hour they were 3-0 down in a game eventually lost 3-2.   On top of that, Roma’s two counter attacking super-jets, namely Ivorian Gervinho and Egyptian Mohamed Salah, are ruled out through injury.  With old man Francesco Totti still recovering from injury, this means that French coach Rudi Garcia is likely to field a front three which sees Bosnian striker Edin Dzeko flanked by Spaniards Juan Iturbe and Iago Falque.

This tie is just one of two crucial games this week for Garcia, increasingly under pressure both from the never silent Roman football media and also from elements within the club.  On Sunday, Roma are away to Napoli in a high pressure game that both teams would probably have preferred not to play, right now.

One suspects that Napoli’s problems are more mental than physical, more about pressure than about tactics.   We saw something of that in the 2-1 defeat of Inter last week when, despite having a numerical advantage against ten man Inter, Maurizio Sarri’s side stopped playing for the last 20 minutes of the match, as if caught in a panic at the thought that they were actually about to go top of the table.

Against Bologna, Napoli played like a side that had been reading too many good reports about itself.   Napoli were slow into the game and only two goals in the last three minutes from (who else?) Argentine Gonzalo Higuain made their defeat look less emphatic.

Coach Sarri, whilst critical of the referee, had to admit afterwards: “We went into the game with a laid back attitude, our opponents were much sharper, physically and mentally…”

Complimenti to Bologna coach Roberto Donadoni, who replaced Delio Rossi in late October and who has now picked up 10 points in five games in charge.   A serious, competent coach, disinclined to play the media game of clever or controversial sound-bites, Donadoni earned himself all manner of plaudits last season for the manner in which he guided Parma through a highly difficult season which ended with the club bankrupt and relegated to Serie D (Italy’s semi-professional fourth division).

As for the Europa League, things are looking bright for Italian football.  Napoli and Lazio have both won their Groups whilst Fiorentina require only a draw at home to Portuguese side Bellenenses to guarantee a place in the next round.   Given the form they showed in a 3-0 defeat of Udinese on Sunday, one would have to say that second placed Fiorentina, one point behind Inter, one clear of Napoli, are looking good.

We may have further indication of just how good, though, when Fiorentina travel to Turin to meet Juventus next Sunday in an always keenly felt clash.   Stand by for fireworks.