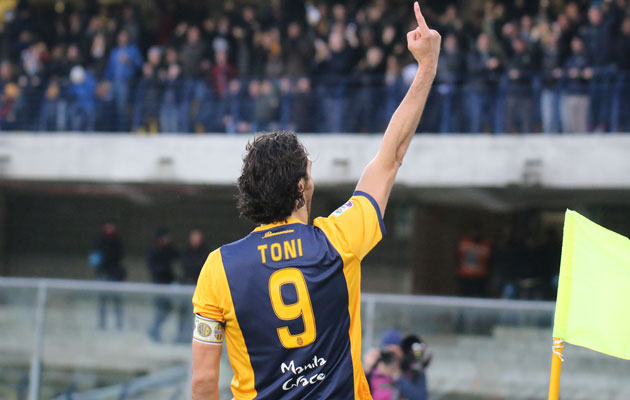 1) Toni eyeing the record books at the age of 37

A couple of seasons ago when he was playing for Fiorentina, Luca Toni was offered the job of coaching one of the club’s youth teams. No thanks, he replied, I am not ready to quit just yet.

Two goals in Verona’s 2-0 home win against Napoli on Sunday would suggest that 37-year-old Toni got the call right.

As of this week, the former Italy, Bayern Munich, Roma and Juventus player is in second place in the Serie A goalscorers’ chart, on 13 goals, two behind the table topping Argentines, Carlos Tevez of Juventus and Mauro Icardi of Internazionale.

Since the beginning of the New Year, Toni has scored eight goals for Verona with seven of those coming in his last six games. With 33 Serie A goals for Verona to his credit, he is now in serious danger of becoming the all time leading Verona goalscorer, since he is just two behind chart topper, Emiliano Mascetti, who played for the club in the 1960s and 1970s.

As for the future, Toni indicated that this time, he might make a different call and finally retire at the end of this season, saying yesterday: “I am going to go on holiday with my family this summer.  It is a while since we did this and when I am with them, we will decide.

“For four years now, people have been saying that this is my last season and yet here I am still playing, so who knows.”

2) Braida reflects on life after Milan 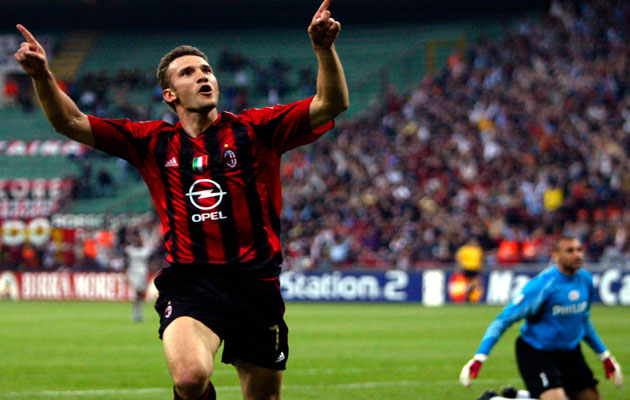 Former Milan sports director, Ariedo Braida, now at Barcelona, admitted to Italian radio this morning that life in Catalonia is something else entirely. Just one month after taking up his new appointment, he was understandably enthusiastic about his new club, saying: “It is just great to be with Barcelona. This is a club that is really well organised. But then, this is a club that earns fantastic money, more than 500 million euros per annum, with the aim to push that up to 600 million…”

Asked about his old club, Milan, currently languishing in mid-table, Braida argued that Milan had all the potential to return to the very top.  However, he qualified that by pointing out that the disparity in economic clout between a club like Milan and Barcelona, saying: “It is obvious that in the past, Milan bought the best players around, starting with Van Basten, Rijkaard and Gullit and including guys like Desailly, Boban, Savicevic, Weah, Kaka and Shevchenko. Not so today…”

Mention of Andriy Shevchenko allowed Braida to take a walk down memory lane, recalling the days back in 1999 when he bought the great Ukraine star from Dinamo Kiev. Having followed the player for some time, Braida asked managing director, Adriano Galliani, to accompany him to watch Shevchenko play. On the night in question, “Sheva” had a poor game: “That can happen, players are not machines”, said Braida, “but Adriano said to me, ‘you’re mad to want to buy that guy’. I paid no attention, though, because I had seen him play a lot and next time I went to Kiev, I went with a Milan shirt bearing his name. What is more, I told him that if he joined Milan, he was certain to become European Player of the Year.”

For the record, Shevchenko was the 2004 European Player Of The Year.

As for 68-year-old Braida, his departure from Milan just over a year ago, after having spent 27 very successful years with the club, has always seemed “strange”. It may well be that he opted to jump before he was pushed, aware that there might not be space for him in the Brave New (younger) World envisaged by new managing director, 30-year-old Barbara Berlusconi, the daughter of owner, media tycoon, Silvio Berlusconi.

With regard to the news that Barcelona are under investigation for possible tax evasion re their 60 million euros purchase of Brazilian Neymat in 2013, Braida suggested that a “solution” will be found. Saying that he thought it most unlikely that Barca would be suspended from the Liga for two seasons, Braida said: “I wasn’t here when they bought Neymar but I am sure that this whole thing can be sorted out”. 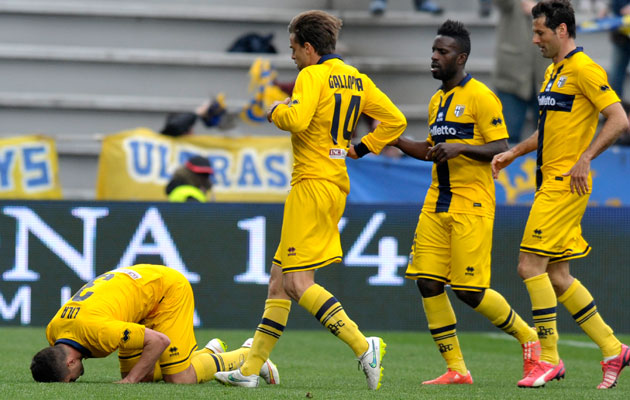 Embattled Parma will know their immediate fate on Thursday of this week when the club will feature in a bankruptcy hearing. With the current mysterious ownership of businessman Giampietro Manenti having failed to come up with any money, it seems almost certain that the court will declare the club bankrupt.

What is by no means clear is what will happen then. Ideally, the court will hand over the day-to-day running of the club to the Football Federation and Serie A, who, in theory at least, will be able to call on a 5 million euro emergency fund that will enable the club to play on for the rest of the season. At that point, Parma, currently on nine points and all but mathematically relegated, would be able to drop gently down to Serie B where they might hope to regroup and find themselves new ownership.

If the court chooses not to accept this Federation rescue package, then Parma will almost certainly collapse immediately.   This would mean that the club would not be able to honour its remaining 11 Serie A fixtures. This in turn would mean that the 11 clubs due to face Parma would pick up three easy points since Federation rules state that, if a club fails to honour a fixture, then it is deemed to have lost that game 3-0.

On the football front, Parma, for the second successive weekend, managed to respect the fixture list, turning up for their away tie with neighbours Sassuolo yesterday. Mind you, they probably wished that they had stayed at home, as they lost 4-1 to Sassuolo in a game in which referee Angelo Cervellerato did them few favours when awarding a dubious penalty and sending off goalkeeper Antonio Mirante in the 60th minute, with the score 2-1 for Sassuolo.

There are times when nothing goes right…