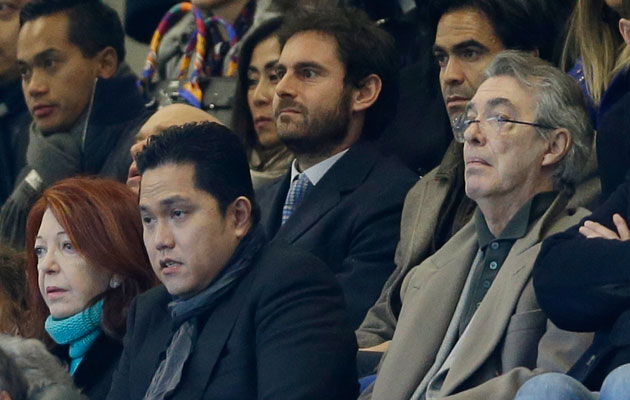 Fifteen months on and the brave new world of Erick Thohir’s Inter is not yet in place. When the Indonesian tycoon (and associates) splashed out a reported 250 million euros for a 70 per cent shareholding in Internazionale in November 2013, his ambitions for the club were huge.

He wanted to see Inter regain its place among the 10 best clubs in the world, whilst he even expressed the hope that Inter might reach the 2016 Champions League Final, due to be played at the San Siro. Right now, in the first week of February, all of that looks just about impossible.

When Inter lost 3-1 to little Sassuolo yesterday, they sank to 13th place in Serie A, some 13 points behind third placed Napoli. Worse still for Inter is the realisation that, for the time being, the Mancini “cure” is not working. When Roberto Mancini, the former Manchester City manager replaced Walter Mazzari in mid-November, he was enthusiastically greeted as a returning prodigal (and winning) son.

The man who led Inter to three Serie A title victories between 2006 and 2008 would be just the guy the get this show back on the road. Indeed, in time he may well be just that but as of now, his results are worse that those of Mazzari before him. In 10 games, Mancini has picked up 10 points whereas Mazzari had collected 16 in the 11 previous games.

Worse still, when Inter met Sassuolo on the second day of the season last September, the Milanese club has crushed the minnows 7-0. To be fair to Mancini, it needs must be said that Sassuolo, in the meantime, have much improved thanks to coach Eusebio Di Francesco and above all to three very useful players up front in Domenico Berardi, Simone Zaza and Nicola Sansone.

Rubbing salt into the wounds of yesterday’s defeat was the unedifying spectacle of a post match “altercation” between Argentinian striker Mauco Icardi and some of the Inter fans. When Icaridi took off his team shirt and threw it to the fans, they simply threw it back at him, prompting the player to address them in a less than parliamentary manner.

So what has gone wrong? When Inter opened the New Year with an arguably unlucky 1-1 away draw to leaders Juventus, it looked like the Mancini effect was beginning to get results. That result had followed on from useful draws against such as neighbours Milan (1-1) and Lazio (2-2).

With January window recruits such as German Lukas Podolski from Arsenal and Swiss midfielder Xherdan Shaqiri from Bayern Munich, Inter seemed ready to make a serious challenge for the third place spot which guarantees a much desired Champions League place. Inter, however, now find themselves just six points clear of the relegation zone following a draw with little Empoli and defeats by Torino and Sassuolo in their last three games.

Mancini has plenty of problems – his defence is so often exposed that even an experienced campaigner like Serb Nemanja Vidic looks shakey; his midfield schemers such as Croat Mateo Kovacic and Colombian Freddy Guarin have not yet truly delivered; while striker Mauro Icardi’s exchange with the fans yesterday is indicative of a certain mental fragility in the Inter dressing room.

Can Mancini still put all this to rights? Given that the club seems determined to stick with him, the answer could well be “Yes, He Can”. Inter may have missed out on all their most important Serie A objectives but, fortunately for Mancini, they are still involved in both the Italian Cup and the Europa League.

In the past at Fiorentina, Lazio, Inter and Manchester City, Mancini used Cup wins as the springboard to greater things. Could this happen again? Doubtless, Mancini hopes so.