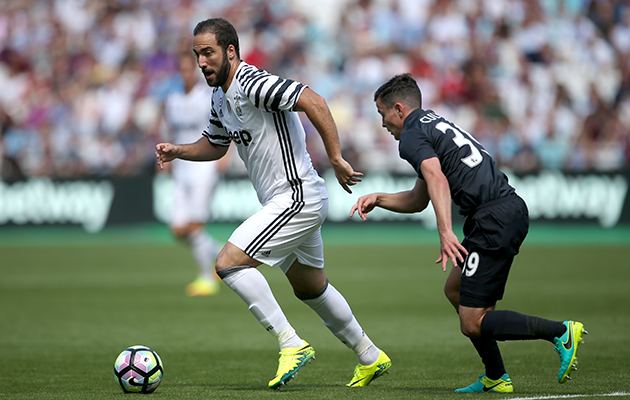 In theory, the new Serie A season which opens up this weekend with Roma’s home tie against Udinese on Saturday evening, is one marked by dramatic changes.   Pogba has moved from Juventus to Man United, Higuain from Napoli to Juventus and the two Milian giants, Milan and Inter, are now totally owned by Chinese interests.

All change then?   Well, not so fast because if there is one thing that a vast battery of “experts” argue, it is that reigning champions Juventus, winners of the last five league titles, will be even stronger this year.    Many would argue that a sixth consecutive title for the Old Lady of Turin is just a matter of time.  So then, will the 2016-2017 league contest be a case of no change at all as Juve triumph again?

What is true is that, even if Juventus have lost the fabulous talent of French midfielder Paul Pogba, sold to Man United for €105 million euro, they have compensated with some pretty big buys of their own – Bosnian Miralem Pjanic (Roma, €32 million), Croat Marko Pjaca (€23 million Dinamo Zagreb). Moroccan Medhi Benatia (€3 million loan from Bayern Munich), Brazilian Dani Alves (free transfer from Barcelona) and, above all, Argentine Gonzalo Higuain (€94 million from Napoli). 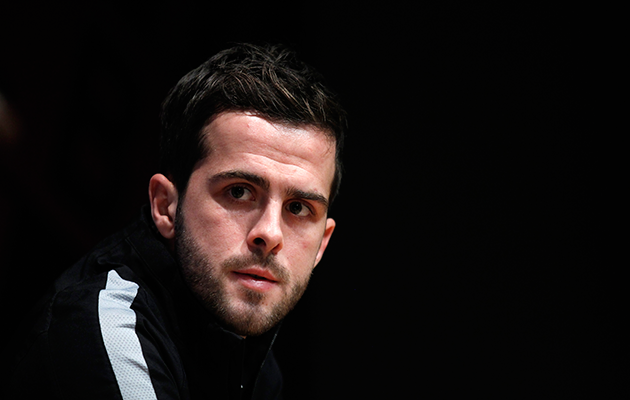 The purchase of Miralem Pjanjic strengthens Juventus while simultaneously weakening a rival.

The purchases of Higuain, last season’s record breaking Serie A goalscorer with 36 goals, and of the Roma playmaker, Pjanic, represent a double-edged sword a la Bayern Munich in Germany.   Not only have you strengthened your own team but you have also dealt a serious blow to your two closest rivals by depriving them of their best players, both bought not through a complex negotiation but rather through expensive “buy out” clauses in their contracts.

On paper, at least, Juventus look by far the strongest side in the land, one that has put together a war treasury with which to battle for the Champions League.   With Paulo Dybala to partner Higuain in a mouthwatering all-Argentine attack, with Dani Alves offering offensive bite to the defence, with Pjaca promising youthful energy on the flank and with Benatia adding hardly needed solidity to the Juventus defence, the Old Lady looks like a serious number.  It remains to be seen if she is “serious” enough to survive the departure of Pogba but, at this stage, one suspects she will.

One man who dares to take a different view is the new Inter coach, Dutchman and ex-Ajax player and coach Frank De Boer.  Appointed at the beginning of this month, just two weeks before the seasonal kick-off, De Boer told Gazzetta Dello Sport: “Well, we’ll have to wait and see how they (Juventus) go in midfield, it’s by no means sure that they will be stronger than last year.   Yeah, they have bought big name players but we don’t know yet if these big names will make into a big team…” 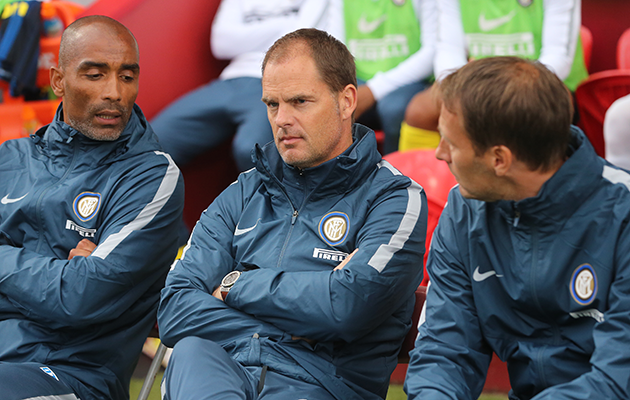 Does the Dutchman have a point?   With Pogba gone and with Claudio Marchisio still out injured, perhaps he does but it sounds more like wishful thinking.  As for De Boer’s Inter, he can call on at least two exciting new boys in Italian international Antonio Candreva (Lazio) and Argentine Ever Banega (FC Seville).

Some indication of how Juventus stands will come from this weekend’s opening day which sees the Old Lady face another historic rival, Fiorentina, at home.   As for De Boer and Inter, they are away to the doughty Chievo.

Changes afoot at Inter and Milan

For Inter, this has been a dramatic summer.   First, in late June, the Chinese electronics giant Suning splashed out €270 million euro for a 68.55% holding in the club, effectively taking over ownership from Indonesian Erick Thohir, the man who bought a majority shareholding from historic Inter owner, Massimo Moratti, three years ago.

Thus far, the biggest impact of the advent of the new ownership has been the departure of coach Roberto Mancini, replaced by De Boer.   This move did not exactly come out of the blue.   Reportedly sidelined and left out of the loop re transfer activity, Mancini had been indicating his concern long before the eventual parting of the ways.

To some extent, there were those at Inter who were disappointed with club’s fourth place finish last year in a season when Inter had been top of the table at Christmas.  Club insiders felt that in his second season in charge and with a squad of players largely of his own choosing (Croat Brozovic, Frenchman Kondogbia,  Brazilian Melo, Croat Perisic, Colombian Murillo, Brazilian Miranda, to name just some), Mancini might have done better.

His cause was hardly helped by some poor friendly results with Inter losing to Cska Sofia, PSG, Bayern Munich and, most embarrassingly, 6-1 to Tottenham Hotspur.  In the end, both parties came to a consensual resolution of Mancini’s contract.

If De Boer’s Inter represent a voyage into the unkown, the same could inevitably be said about city cousins, Milan.   In a move that signalled the end of a magical era, media tycoon and former Italian Prime Minister Silvio Berlusconi in early August finally agreed to sell his club to a consortium of Chinese investors. 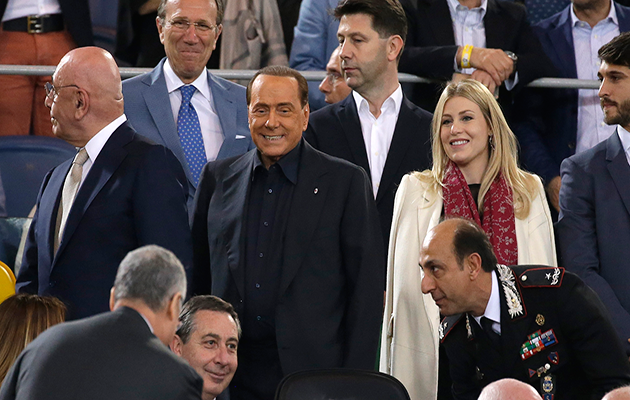 End of an era…Silvio Berlusconi (centre) has sold his precious Milan.

79-year-old Mr. Berlusconi sold the club to a purpose created company called Sino-Europe Investment Management Changxing, which bought a 99.9% holding for €740 million euro, a price that also includes picking up the tab for €220 million euro of debt.   This sale came after a year of on-off negotiations with at least three different China-based groups, when at times it seemed that Mr. Berlusconi was reluctant to part with such an important piece of the family jewellry.

Throughout his metamorphisis from media tycoon into successful politician, Mr. Berlusconi regularly flaunted his success with Milan as proof that he was a winner.      Having bought the debt-ridden club in 1986 for approx. €8 million euro, Mr. Berlusconi presided over a golden era when the club won five Champions Cup/League titles, becoming arguably the strongest club team in world football.

When he entered politics in 1994, he opted to remind the Italian electorate of his football success by calling his new party, “Forza Italia”, a fan chant which until then had meant only “Up Italy”.   He spoke of “taking to the field” and lest people did not get the point, he even taunted his electoral rival in the Roma 1 constituency in the 1994 election, economist Luigi Spaventa, by saying: “Before running against me, go and win yourself two Champions Cups”.

In that context, Mr. Berlusconi was clearly reluctant to sell off one of his greatest success stories.   However, the last decade of Italian football has been dominated by Milan’s two greatest rivals, Juventus and Inter Milan, while the Berlusconi club has registered only two really important triumphs in that period, namely the 2007 Champions League and the 2011 Serie A title.

Furthermore the club has haemorrhaged money in recent seasons.   In April, it reported an €89.3 million loss for the financial year of 2015, a result which only increased existing family pressure to sell.   Both Mr. Berlusconi’s elder children, Marina, head of the Mondadori publishing house, and PierSilvio, vice-president of the Mediaset TV group, are believed to have strongly urged that he sell the club.

For the time being, little is known about the new owners, other than that the Chinese state holding company, Haixia Capital, and other Chinese industrialists and investors form part of the consortium.   The most curious aspect of the deals involving both Milan clubs is that they would seem to suggest that, despite its obvious decline in recent years, the once mighty Italian football still holds a serious attraction for Asian investment.

At this point, too, it would seem that new Milan coach, Vincenzo Montella, appointed in June, will start off the new season largely with last season’s squad, given that the club’s transfer activity was hampered by the sale.  As of now, Montella can count on four relatively “low key” new players in Argentinians, Leonel Vangioni (River Plate), Jose Sosa (Besiktas), Gianluca Lapadula (Pescara) and Paraguyan Gustavo Gomez (Lanus).   Milan kick off with a tough tie, at home to the Sinisa Mihajlovic coached Torino.

Final thoughts concern last season’s second and third, Napoli and Roma, in the post-Higuain and post-Pjanic era.   Napoli , who start away to Pescara on Sunday, have looked good in recent friendlies whilst Roma were far from disgraced in a 1-1 Champions League qualifier draw away to Porto on Wednesday night.   All to play for then and over to the Olympic Stadium, Rome on Saturday evening for the first game of the season, Roma v Udinese.