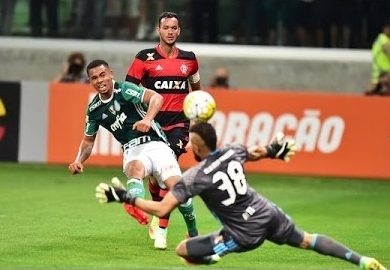 There are still twelve rounds to go and at least four teams in the running to win this year’s Brazilian Championship.  Last week, though felt like the final furlong of a two horse race when leaders Palmeiras met second place Flamengo in Sao Paulo on Wednesday night.

Palmeiras were welcomed back by a considerable number of their own fans when they arrived at Sao Paulo airport after a goalless draw with Gremio on the previous Sunday.  But on the Tuesday, Flamengo’s supporters did better.  On a weekday afternoon at least 5,000 of them turned up in Rio de Janeiro’s domestic airport to chant and encourage their team as they flew off to Sao Paulo for the game against Palmeiras.  And on the day after the game, many were back to greet the players as they returned after a 1-1 draw.

It was a result from which Flamengo could take considerable satisfaction.  Before half time they had defensive midfielder Marcio Araujo sent off.  But not only did the ten men hold out against the league leaders, they broke away to take the lead through substitute Alan Patrick, and had opportunities for a second before they failed to clear their lines quickly enough at a late corner, giving Gabriel Jesus the chance to equalise.

Flamengo’s title challenge had not really been expected this year.  The club have been giving priority to financial reorganisation, they have been forced to live a nomadic existence with Rio’s main stadiums being used for the Olympics and Paralympics, and the decision to appoint veteran coach Muricy Ramalho predictably backfired.  With health problems and past his sell by date, he resigned.  An unknown, Ze Ricardo, stepped up from the youth team to take charge on a caretaker basis – and in such unpromising circumstances he has done well enough to earn the job on a more permanent basis.

His team have been grinding out results, at times with more determination than style.  But perhaps holding Palmeiras with ten men has given the team a morale boost.  On Sunday morning they stayed in Sao Paulo for a home game against Figueirense, and their 2-0 win may well have been the most convincing display of the campaign so far.

Their problem, though, was that Palmeiras were similarly inspired.  The previous day they travelled across town for the traditional Sao Paulo derby against Corinthians.  They had no fans in the stadium – the city’s derbies have been declared home supporters only after a wave of crowd trouble.  But Palmeiras were in control from start to finish, and won 2-0 with hardly an alarm – a result which led to the sacking of Corinthians coach Cristovao Borges.

Palmeiras, then, remain a point clear of Flamengo.  And four points behind the Rio giants are Atletico Mineiro, who can probably boast the best collection of attacking talent in the competition.  Just a point behind them are Santos, an attractive side also capable of launching a challenge, especially if they can improve a bafflingly poor recent away record.

So there is plenty of football still to be played, and lots of crunch games to look forward to.  Flamengo fans will especially be looking forward to being able to see their team in action in the Maracana stadium – possibly for the game against Corinthians just over a month from now, when the atmosphere they generated last week in an airport will surely be recreated in one of the world’s great stadiums.