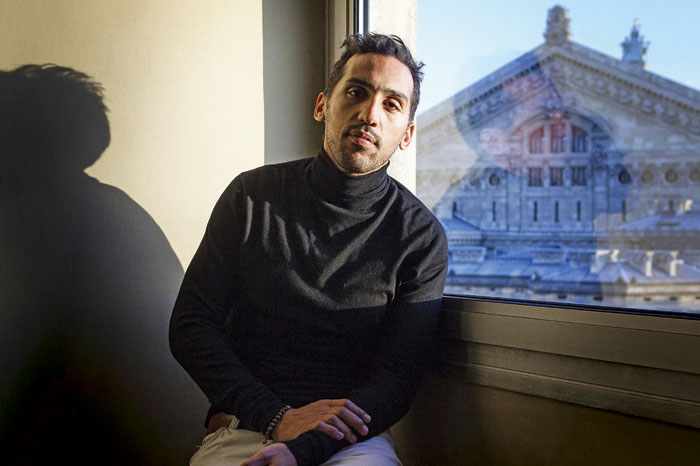 Zahir Belounis pictured on his return to France.

Zahir Belounis emerged from the arrivals terminal at Charles de Gaulle airport into a blinding sea of flashbulbs, a forest of microphones and, finally, into the open arms of his mother. It was the first time that the French footballer had ever been welcomed like a returning superstar, to a media scrum and the tears of loved ones. Except Belounis wasn’t returning as a superstar for his exploits on the pitch. He was returning after effectively being kept hostage off it.

The 33-year-old defensive midfielder had enjoyed a modest career, playing in the lower reaches of the French league, never quite cracking the big time. But in 2010 he was offered a once-in-a- lifetime opportunity to move to Qatar and play for El Jaish, the army’s football club who were then in the second tier. The contract was bigger than any he had been offered in his life. A host of big-name players had made the journey east over the years – including Marcel Desailly and Frank Leboeuf – so why not Belounis?

But Belounis’ decision to chase his dream would turn in to a nightmare. A contract dispute with his club saw him trapped in Qatar’s arcane immigration system and prevented from leaving the country. He was trapped there for more than 18 months.

In May, Belounis’ plight came to light in the international press. He had become a victim of Qatar’s notorious kafala system, a form of sponsorship that ties all employees to their employer. He alleged that his wages hadn’t been paid for two years. When he went to the courts to seek redress he was slapped with an effective travel ban and told by the club, he alleges, that he would only be allowed to leave the country if he dropped his case.

It is impossible in Qatar to get an exit visa without your employer’s say so. Kafala has long been controversial across the Persian Gulf, where it is used in the United Arab Emirates and Saudi Arabia, among others. Human rights groups such as Amnesty International and Human Rights Watch have denounced the system as little more than a form of modern-day slavery that allows for the exploitation of millions of low-wage migrant workers from India, Pakistan, Nepal and Bangladesh who are carrying the weight of Qatar’s rapid development on their shoulders.

There are 1.3million migrant workers in Qatar’s construction sector alone. Every report released by human rights groups about kafala details passport confiscations, appalling housing conditions, non-payment of wages, high suicide rates and deaths due to poor health and safety. A newspaper report on one Qatari construction site detailed how dozens of Nepalese workers had died this summer after working in heat that regularly tops 50 degrees Celsius.

The plight of migrant workers in the Gulf has been raised before, but little has changed. But Qatar’s victory in the race to host the 2022 World Cup finals focused a new light of scrutiny on the Emirate. People who would have skipped over a story about the misery that kafala brings to millions in the Middle East were interested in one about how the World Cup would likely be built by a system described as modern-day slavery.

And it was Belounis and his ordeal in Qatar that has arguably done more than any single case to raise the issue of kafala and forcing the reform of a brutal and unfair system.

Things began well for Belounis in his first season at El Jaish. He helped them win promotion and also represented Qatar at the Military World Cup. He was given citizenship so that he could compete under the Qatari flag. But when he returned, his Qatari passport was quickly taken back and he was loaned out to a second division club. Despite Belounis’ five-year contract, his El Jaish wages stopped and his legal problems began. His case was even taken up by French president Francois Hollande who met him in the summer of 2013.

Still, nothing was resolved and, in the end, Belounis says the Qataris only gave him an exit visa after he signed a document renouncing his claim for the unpaid wages. By that point he had already contemplated a hunger strike and suicide. He signed but was not allowed to leave until, finally, he received a phone call saying he had to go. Quickly.

“Someone called me and said: ‘Tomorrow, you leave. You have 24 hours’,” he recalled. “I just took my
wife and two daughters and ran to the airport. I was so happy.”

Belounis now has to rebuild his life. He is, according to his brother, suffering from severe depression. He has no
club and no job. He hasn’t played competitively in two years but will pursue the Qataris for his unpaid wages through the French courts.

“What they did to me was blackmail,” Belounis said. “For my club the money is nothing. For me it would change my life. I have lost everything. I need to start my life again and find a job.”

The case has been hugely embarrassing for FIFA, who declined to help in any way, and Qatar. In the wake of a slew of stories regarding the appalling treatment of migrant workers in the country, the Qatar 2022 Supreme Committee released a so-called “Workers’ Charter” designed to ensure that working standards in all World Cup projects would be met.

“Qatar is developing at a staggering pace and the good thing about the World Cup is that it shines some
light on these issues. They were there long before,” said Nasser Al Khater, spokesperson for the Qatar 2022 Supreme Committee. “Our standards will be better than the minimum standards. We will put standards of enforcement in place that any non-governmental organisation will be happy with.”

Yet the Belounis case proved that this isn’t enough. If seven months of negative coverage in the international media and a visit from the French president can’t secure an equitable solution to a labour dispute, what hope is there for a Nepalese worker trapped in a similar situation?

Despite his ordeal, Belounis still believes Qatar can host a great World Cup. He doesn’t tar all Qataris with the same brush. Many, he said, were equally as appalled at his employer’s actions. One Qatari even paid for his family to stay in a hotel in his final weeks after he had sold all his furniture.

“There are two things they have to see,” said Belounis of the Qatari authorities. “With my situation there are people that will abuse the system. And there are some international companies that abuse as well. The government has to be harder on the abusers.”

Groups like the International Trade Union Confederation, and other players who have experienced similar disputes in Qatar – such as former Morocco international Abdeslam Ouaddou – have called for Qatar to be stripped of the 2022 World Cup over their record on labour rights. But that is far too simplistic. The only reason the issue of kafala is being discussed and potentially reformed is because of the World Cup and, in part, because of Zahir Belounis’ vocal campaign against his treatment.

He returns now to France to an unclear future. But at least he has returned. “[My mother] was the first person I saw,” he said of his arrival back in Europe. “I was so happy to see her, you cannot imagine. She just said: ‘I love you, I love you’.”