The soccer-crazy kid from Hershey in Pennsylvania had been tipped for the top right from the very start. Taking advantage of his father’s coaching connections, he spent a week training at Barcelona’s iconic La Masia academy as a 10-year-old and by his early teens he was an object of desire for a host of leading European sides, invited for trials by the likes of Chelsea, Porto, Villarreal, PSV and Borussia Dortmund – whose youth programme he would eventually plump for in the summer of 2014.

Prior to signing for Die Schwarzgelben, Christian Pulisic was a star turn with the Pennsylvania Classics and the United States’ under-17 side, but initially it was international team-mate Haji Wright who attracted the attention of the Ruhr club.

In January 2014 the Germans sent a scout to watch striker Wright in action at the Aegean Cup youth tournament in Turkey, but it was the young midfielder who caught the eye. His speed, touch, athleticism and awareness convinced Dortmund to make transatlantic contact and Pulisic was quickly invited back to Europe for a trial.

As is usual in such circumstances, Dortmund rolled out the red carpet and the youngster was afforded the warmest of welcomes from the club’s general manager Michael Zorc and youth-sector chiefs Lars Ricken and Eddy Boekamp.

After a tour of the club’s sumptuous training facilities and repeated references to the importance of youth at the Westfalenstadion, the charm offensive worked a treat. “I kind of knew it was the right place for me,” recalls Pulisic. “They really liked me. I pretty much knew that this was what I wanted.”

It has since emerged that Dortmund’s regional arch-rivals Schalke were also in the hunt to sign the boy wonder and the Gelsenkirchener reportedly held talks with his agent. By way of consolation, they would two years later seal a deal for Haji Wright, who made his first-team debut in the Bundesliga in November last year.

Although he was accompanied by his father during his first two years in Germany, Pulisic naturally experienced a few teething problems in his new surroundings. A mere 15 years old, he found himself 3,800 miles from home, spoke not a word of German and had to settle in at a local school.

“It was not easy for him,” according to Dortmund youth-team coach Hannes Wolf. “He was pushed to the extreme.” 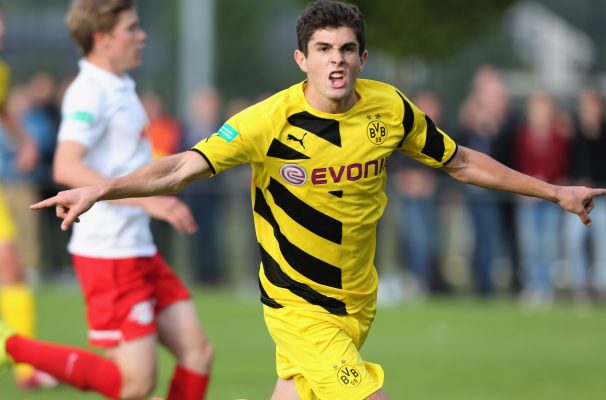 Playing for Dortmund as a youngster (Getty Images)

A particularly frustrating aspect of his first few months in Dortmund was a decree that prevented him from playing in competitive games as he waited for his application for European citizenship to go through. With his grandfather, Mate, hailing from Croatia, he was eligible for the same passport rights and by 2015 the administrative hurdles were finally cleared and he could at last turn out for Dortmund’s under-17s.

Free to finally play, he wasted no time in making a name for himself with the Black-and-Yellows, either scoring or providing an assist in each of his first four starts for the under-17s and featuring prominently as they won the 2015 national title. Usually lining up as a number 10, he formed an exceptional deep-lying attacking trident with future German under-21 international Felix Passlack, who is currently on loan at Norwich City in England, and Jacob Bruun Larsen, a Dane who scored his first goal for Dortmund’s senior side in September.

Dortmund’s ethos of “if you’re good enough, you’re old enough” speaks volumes for the ability of Pulisic, who at 16 began training with the first team. Beneath the surface he might have been awestruck but he managed to keep his emotions in check and came through the audition unscathed.

The teen’s emergence coincided with Jurgen Klopp’s last few months in charge of Dortmund and in February 2015 the coach told Kicker magazine: “[Pulisic] absolutely can play. In intensive drills in tight spaces, he didn’t let himself down. It’s a real sign of quality.”

There was simply no stopping Pulisic and after an explosive four-month stint with the Dortmund under-19s in the autumn of 2015 he was included in the first-team squad for a winter-break trip to Dubai. On the resumption of the Bundesliga, he made his top-flight debut aged 17 years and 133 days and became the eighth youngest player in the competition’s history. A couple of weeks later, Thomas Tuchel – Klopp’s successor – handed him his first taste of continental action.

In late February 2016 he made his first start, lining up on the left wing against Bayer Leverkusen, and two months on a goal against Hamburg at the Westfalenstadion made him the fourth youngest Bundesliga marksman at 17 years and 212 days.

Confident, though never lapsing into brazen cockiness, Pulisic continues to unfurl the coming-of-age achievements: his Champions League opening night in September 2016 versus Legia Warsaw; his first goal in that competition in a round-of-16 defeat of Benfica; a 2017 German Cup winners’ medal.

“We’re no longer at the point of being surprised by Christian’s performances,” said Tuchel at the time. “He’s justified our trust in him. He’s a player who never gives up. He’s critical of himself and always maintains his intensity.

“He’s composed, he’s reliable. He plays to his potential under pressure.”

Former Dortmund youth coach Wolf wholeheartedly agrees, explaining to Kicker: “As soon as he came to us as a 15-year-old it was clear what he was all about. He’s a mix of technical ability, great speed and serious attitude to his craft. That was very impressive.” Pulisic’s father Mark is equally effusive in his praise of Wolf’s part in his son’s success, telling Goal website: “From the moment Christian arrived in Dortmund, he was made to feel wanted and the most important person in all this was Hannes Wolf. He really helped Christian find his feet in a new country.

“He was a trainer as well as a friend, both on and off the pitch.”

Given his genealogical input there was always a strong possibility that Pulisic would one day earn a living from football as his parents, Mark and Kelley, both played collegiate soccer at George Mason University in Virginia, with Mark later turning pro and spending eight years on the books of indoor-arena side Harrisburg Heat.

Pulisic senior later ran the soccer programme at Lebanon Valley College in Pennsylvania, taking charge of Detroit Ignition in the Major Indoor Soccer League and tutoring youngsters at PA Classics, where his son played. Mark also served as a youth coach at Dortmund for 18 months, from 2015 to 2017, and was an assistant at three lower-league outfits in the US: Harrisburg City Islanders, Rochester Rhinos and Pittsburgh Riverhounds.

Growing up in such a sports-orientated environment, it was no surprise that Pulisic came to prominence so quickly.

In late 2013 he starred for the USA under-17 side against Brazil at the Nike International Friendlies series and was voted the tournament’s Most Valuable Player – at just 15. For those with their finger on the pulse of US soccer, an ascendant Pulisic was just what they expected; a case of class will out.

“I first saw him when he was probably 11 or 12 in Washington DC,” USA midfielder turned national under-20 coach Tab Ramos told Sports Illustrated magazine. “He was playing for PA Classics against DC United in an under-14 age-group match. I was walking by and I saw someone who was so little on the field. He completely looked like someone’s little brother who had wandered out onto the field. I was waiting for someone to pull him off. Then I realised he was running the show.

“He clearly was younger, smaller and did not look as though he belonged.

That is, until he was around the ball. After watching the game for five minutes, you realised that everybody was playing through him. The pace of the game was completely dictated by him.”

Loaned back to Dortmund for the remainder of this season by Chelsea means Pulisic won’t make his Premier League debut until next term, and it feels like a moment for which he has been waiting all his life.

At the age of seven he spent 12 months with his family in Oxfordshire while his mother concentrated on her teaching-exchange business and his father studied for his UEFA A coaching badge. A big fan of Manchester United and England striker Wayne Rooney, the youngster visited a number of England’s top grounds – among them Anfield, Old Trafford and White Hart Lane – and played in the junior ranks of Brackley Town, a club in the neighbouring county of Northamptonshire. 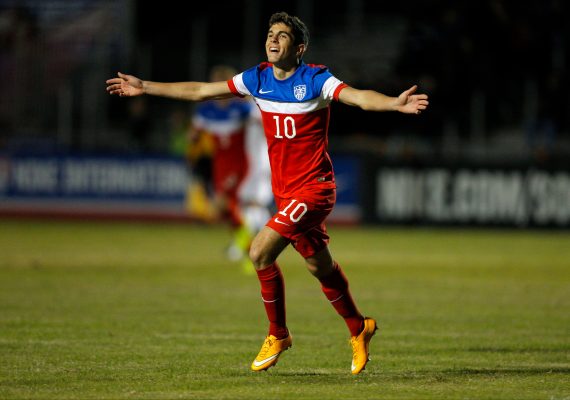 Playing for the U17 national side (Getty Images)

On returning to the States he had a short spell with Michigan Rush – while his dad coached Michigan Ignition – and then joined US Soccer Development Academy club PA Classics. Capped by the USA under-15s when he was 13, he scored 20 in 34 games for the under-17s and by the spring of 2016 – aged 17-and-a-half – he made his full international debut. A couple of months later he became the country’s youngest-ever goalscorer, netting in a friendly victory over Bolivia in Kansas City.

“This player’s potential is limitless,” declared US boss Jurgen Klinsmann. “I’ve always said you have to write your own story and he’s doing it right now. I think it’s rare in America for a player to be so developed at such an early age.”

Clearly someone with a lot of faith in the youngster, on the eve of the Bolivia game he even allowed Pulisic to fly back to Pennsylvania for his high-school prom. Klinsmann’s one-time assistant, the ex-Austria playmaker Andreas Herzog also is a fan, declaring: “Amazingly for one so young he is almost the complete player. He’s technically very strong, is exceptional when dribbling in one-on-one duels, gets stuck in with a lot of dynamism and is sensationally quick.

“He has a flair for quick thinking, for assessing a situation and coming up with the solution.” Steve Klein, director of coaching at PA Classics, says Christian’s success boils down to his talent, his mentality and the support system around him.

“I don’t think you can teach a lot of the stuff he has,” he told NBC Sports. “You definitely knew at an early age that he was going to be a very good player. It was just his feet. He had a sense on how to play through balls.

“For him to go over [to Dortmund] at a young age and fight with grown men, he had to have a strong character. That’s where his parents have done such a good job. Not going crazy when they’ve seen they have a very talented player.

“There are a lot of soccer people who have kids and go nuts because they dream of what their kid is going to do and ruin them.”

Pennsylvania is known as a breeding ground for some top American Football quarter-backs, such as Joe Montana, Joe Namath and Dan Marino. Now it seem soccer wizardry grows there too.