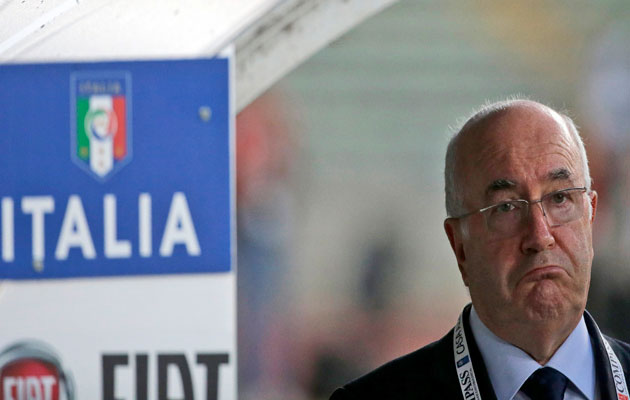 It would seem that Italian Football Federation President, Carlo Tavecchio, has once against talked himself into public controversy.

Last summer, whilst campaigning for the Federation (FIGC) presidency, Tavecchio made seemingly racist remarks when talking about non-EU players in Italian football, saying: “…’Opti Poba’ has come here, yesterday he was eating bananas, today he is a first choice player for Lazio…”

This time, Tavecchio has walked himself into a storm with seemingly offensive remarks about both gays and Jews.

A recorded conversation with Massimiliano Giacomini, editor of website Soccerlife, is carried by many Italian media sources this morning. At one point in the conversation, Tavecchio asks Giacomini about an unnamed, gay football official, saying:

“But is it true that that guy is…I mean I have nothing against them, but keep them far away from me, I am totally normal…”

In the same conversation, Tavecchio also talks about Roman Jew Cesare Anticoli, the businessman from whom he bought the current headquarters of the Italian Amateur Football League (LND), which was headed by Tavecchio for 15 years from 1999 to 2014.  He tells Giacomini:

“He’s a right Jew boy…It’s better to keep a bit of distance between yourself and Jews”.

Those particular anti-semitic remarks need to be set against the background of dealings between Messers Tavecchio and Anticoli. In the space of 22 days in early 2008, Vispa 07, a company headed by Mr. Anticoli, bought and then sold a prime central Rome site to the Amateur League.

The curious aspect of the deal is that when the Piazzale Flaminio building was bought on January 23 it was worth €11 million euro but when it was sold to the Amateur League 22 days later, it was worth €19.7 million (approx 45% more).

As is his way, Tavecchio denies any wrongdoing, be it vis a vis “Opti Oba”, the Amateur League headquarters or, in this case, gays and Jews.  In a statement, he says that he was not speaking in a formal interview but rather in a “personal encounter” with Giacomini.

The implication is that Giacomini recorded the conversation secretly with a view to using it as some form of blackmail against Tavecchio, who has also threatened Giacomini with legal action, alleging that the journalist has libelled and denigrated him.

The journalist did this, Tavecchio claims, because the Football Federation had denied him Federation funding for Soccerlife. Giacomini insists that the interview is genuine and the Football No. 1 is lying about the funding issue.

Notwithstanding the protests of both Jewish community and Gay Rights spokespersons, sports daily Gazzetta Dello Sport this morning concludes that the football boss will be able to ride out this latest storm, commenting: “Partly because the world of football has descended into a state of total immobility and partly because, at least in Italy, you just get used to certain comments”

This latest Tavecchio storm comes just one month after police raided the offices of both the Serie A League and of various clubs as part of an investigation into alleged irregularities in the distribution of TV broadcasting rights involving rights agency Infront, Sky Italia and Mediaset.

This investigation alleges that Infront, Mediaset (Berlusconi) and Sky Italia (Murdoch) operated a “cartel” system to exclude competition from the purchase of the 2015-2018 Serie A TV rights, worth €945 million per  season. Gazzetta Dello Sport suggests that, in the current situation and particularly in the light of this latest investigation, it might suit many powerful players to keep Carlo Tavecchio at his post, albeit in a reduced, “lame duck” capacity.

This could be.  Others may be less “understanding”. Democratic Party politician Emanuele Fiano, son of Auschwitz survivor Nedo Fiano, puts it this way: “Racist, ignorant and shabby.  I have only one thing to say – Tavecchio is incompatible with any role…”