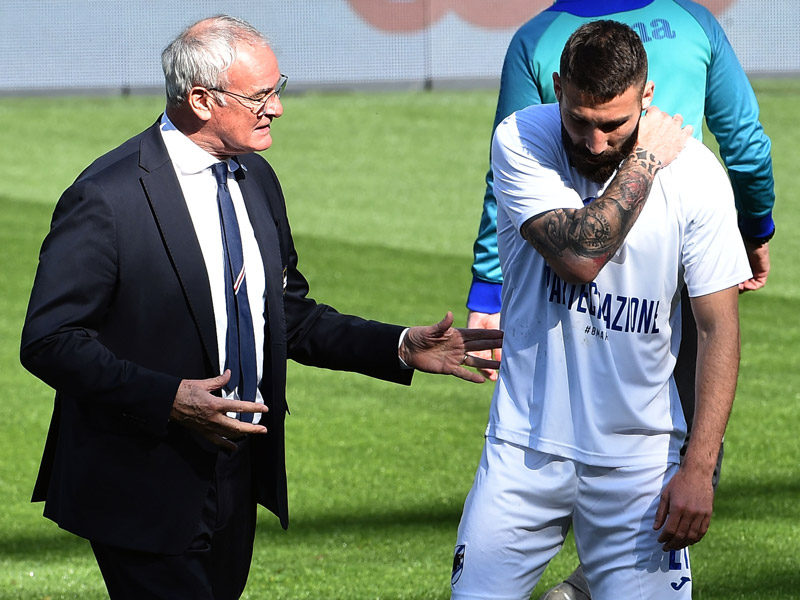 Paddy Agnew’s Notes From Italy: Ranieri Warns Against Serie A Returning Too Soon

As football continues to ponder the timing of its immediate future, wise old man, ex-Leicester manager Claudio Ranieri continues to warn against the health risks of too much “post-coronial” football.

With many in Italian football still seemingly determined to play out the full 2019-2020 season, by means of an obviously rearranged and crowded summertime fixture list, Ranieri this week again sounded a note of warning.

The current Sampdoria manager has already experienced the Covid-19 virus too close up for comfort since nine of his squad have tested positive. With that in mind, Ranieri on Monday told state broadcaster RAI about his concerns, saying:

“If they opt to get the show on the road again (restart the league season), taking all due precautions, then that is fine. However, we will be forced to play three games per week and, at that point, I would propose 5 substitutions per game to alleviate the huge stress on some of the players, especially those guys who have been infected with Covid-19…

Speaking of his own squad’s experience, Ranieri observed:

“One of my players who tested positive began some light training just as soon as he had tested negative but very quickly he was testing positive again. We have got to be very careful and be certain that the players are 100% ready and able to play football…

Ranieri stressed that he is not opposed, in itself, to the idea of playing out the full 38 match season (most clubs still have 12 games to play), adding however:

“I think it is only right that the clubs play out the title contest and relegation battles on the field… Although, no matter what, it will still be a  somewhat falsified title battle since, thanks to a layoff of more than a month, the season’s continuity has been interrupted.”

Ranieri also came up with another suggestion aimed at easing the pressure on players. Namely, the idea that the next Serie A season, 2020-2021, should begin in February 2021 (rather than next autumn) and run though to the end of the year. That solution would remove the time and space pressure of trying to finish off this season’s rescheduled fixture list in order to almost immediately start off the 2020-2021 season this autumn.

That solution would, of course, see the new calendar year, Serie A contest interrupted by the European Championships in mid-season. In coming up with that idea, Ranieri was merely seconding a proposal by the former AC Milan managing director, Adriano Galliani.

Nowadays at the helm of Serie C side Monza alongside his old battle partner, media tycoon Silvio Berlusconi, Galliani is the first to acknowledge that, in these times of crisis, balancing health considerations with economic ones is not simple.

In an interview last week with Gazzetta Dello Sport, Galliani, the man who along with Berlusconi, masterminded those golden years when AC Milan won five European Cup/Champions League titles between 1989 and 2007, outlined his worries about the immediate future, saying:

“We will get out of this economic crisis in football, in exactly the same way as industry will, that is with a collective effort, involving FIFA, UEFA and all the national leagues. We will start to play again when the government, having taken the scientific community’s advice, decides that it is safe to do so. However, Ceferin (Aleksandr Ceferin, the Slovenian President of UEFA) is right. All the domestic league seasons should be played out to the end…”

Galliani argues that Italian soccer (and not just) needs to get going again as soon as possible so that the whole system does not implode. Not to restart and finish off this season (de facto, honouring outstanding contracts to sponsors and TV companies), would cost the Serie A Lega approx €600 million, not including any Champions or Europa League winnings.

Further down the food chain, Galliani predicts dire times, arguing that the 80 Serie B and Serie C clubs in Italy primarily rely on local sponsors who, in the post-Corona climate, may simply not have the spare funds available for football pursuits, adding:

“In reality, these sponsors are part patrons… In the new climate, I don’t know how these clubs will keep going”.

Indeed. We do not know how a lot of clubs, not just in Italy, will keep going, do we?