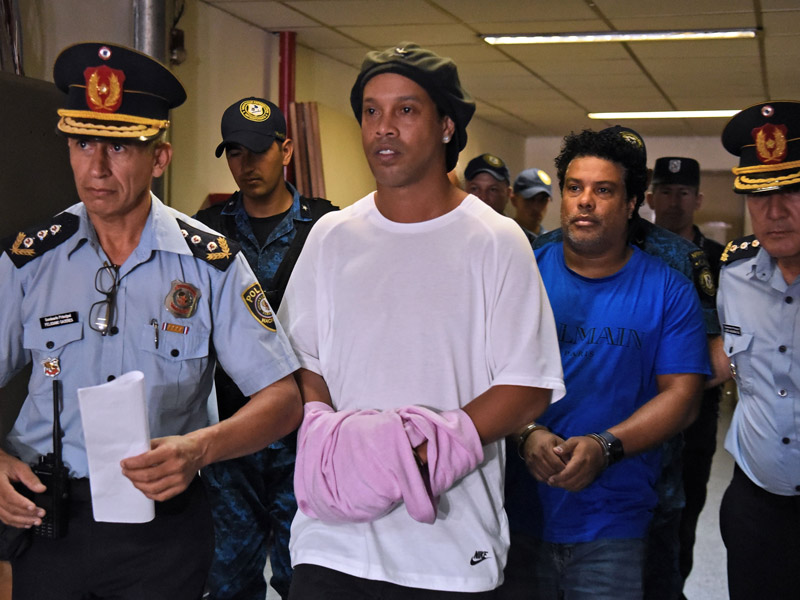 Saturday was emphatically not the 40th birthday that Ronaldinho had imagined.

He was, it would seem fair to assume, looking forward to spending March 21st with close friends and family, perhaps some other glamorous company, with a barbecue and music and dancing and life – and freedom, always freedom.

With a ball at his feet Ronaldinho illustrated maybe better than anyone else the liberating possibilities of football, the chance the sport opens up of joyful self-expression, of freeing the inner child.

And now the symbol of liberty is behind bars. He spent the landmark occasion in a Paraguayan prison.

The train of events is truly baffling. Ronaldinho had no need of a passport to visit Paraguay. His Brazilian ID card would have been enough. And he began his journey at Sao Paulo airport presenting his ID card. But on arrival at Paraguay he and his older brother and manager Assis did something different. They presented Paraguayan passports – documents which had been requested for two women and which subsequently had the details changed.

This set off a conflict inside the Paraguayan authorities. Some on the inside may have been involved in the fraud. Others appeared happy to let the global star do as he pleased as long as he posed for a selfie. Others felt that a passport is serious document and the country was running the risk of looking ridiculous. This faction won out, and so, while the case is investigated, Ronaldinho is under arrest. And, considered a flight risk, he is in prison rather than under house arrest, playing in prison football tournaments, doing some carpentry and no doubt yearning for his freedom.

Were Ronaldinho and his brother really in the process of taking out Paraguayan citizenship? This usually requires a three year period of residency, and would entail surrendering his Brazilian nationality. Did the two passports cost $6 thousand each? And if so, who paid and why?

These all seem like squalid little questions on the 40th birthday of one of the world’s great entertainers. And through it all, Ronaldinho seems bemused – a point made by his own defence lawyer.

That childish smile, once so infectious, now seems wholly inadequate to deal with the complexities of the world. He seems trapped in a permanent state of ‘little brother-hood,’ with Assis making the decisions. Once so liberating, the smile now comes across as a limitation.

Maybe the Brazilian government will pull some strings to ease his situation. Because – yet another bizarre twist in the tail – the man who was caught using a doctored Paraguayan passport was a few months back named as an informal ambassador for Brazilian tourism.