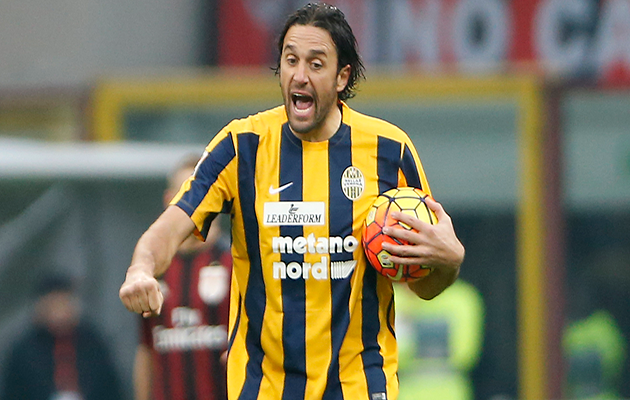 Last weekend witnessed an “end of term”, “school is almost out” Serie A session, distinguished not so much by transcendental results but rather by a series of emotional farewells and potential partings of the ways.

First of all, however, a major tribute has to be paid to the fans of relegated Frosinone who gave their side a standing ovation at the end of the 1-0 defeat by Sassuolo which sends them back down to Serie B. Rather than direct the usual set of insults at the players, the Frosinone fans displayed a series of banners underlining their sense of achievment at what has been an historic first ever year in Serie A.

The basic message was one of thanks with an encouragement to “try again next year”. Not only did the Frosinone players stay on the pitch long after final whistle to acknowledge their enthusiastic fans but, at a certain point in the festivities, they were joined by the Sassuolo players. Need one say that such scenes are much more the exception than the rule in modern Serie A.

There were other moments of great sentiment last weekend in Verona, Florence and Rome. Already relegated, bottom club Helas Verona pulled off the most surprising result of the day when defeating a second string Juventus 2-1, thus ending the champions’s 26 match (25 wins, one draw) unbeaten run. The “sentimental” aspect of this match was that it marked the last game in the career of veteran Verona striker, 38-year-old Luca Toni.

47 times capped Italian international Toni said after Sunday’s game that he would not change anything in his own career. That is an understandable point of view, given that he won a World Cup with Italy in 2006, a league title with Bayern Munich in 2008 and played for clubs such as Fiorentina, Bayern Munich, AS Roma and Juventus during a 22 year long career.

Just to round off in some style, Toni opened the scoring on Sunday against Juventus with a Totti-style cucchiao or chipped penalty that completely befuddled reserve goalkeeper, Brazilian Neto. After a triumphal circuit of the pitch at the end of the game, Toni said:

It was also a “magical” night of standing ovations at the Franchi stadium in Florence as Fiorentina fans played tribute to their 34-year-old captain Manuel Pasqual who, after 11 seasons in Florence, will be leaving the club this summer. Pasqual, 11 times capped for Italy, is not retiring from football but Fiorentina informed him last week that they would not be renewing his contract. Speaking after the club’ 0-0 home draw with Palermo, Pasqual made no secret of the fact that he would have liked to see out his career in Florence, adding that he has no idea where he will be playing next season. 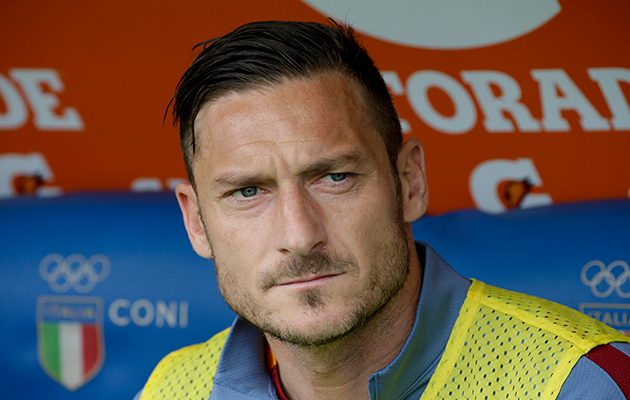 Roma’s Francesco Totti may well be set for one more season spent largely on the Roma bench.

Which is also a question on the minds of Roma fans and their enigmatic talisman, Francesco Totti. At this stage, it looks more and more likely that 39-year-old Totti will be granted one final season next year with Roma, being used in the role of late second half substitute.

In the last month, a strange sort of madness has beguiled Roma’s end of season. Coming on as a late substitute in six games against Bologna, Atalanta, Torino, Napoli, Genoa and this weekend against Chievo, Totti has in some way proved decisive, either scoring himself or setting up a goal. Not for nothing, Roma have won four and drawn two of those six games as they make Napoli struggle all the way to hold onto to second place.

Totti’s late influence on a game reached absurd levels on the night of April 20th when he came on in the 88th minute of Roma’s home game against Torino, with the score at 1-2 for Torino. Within 22 seconds, he had scored the equaliser, whilst two minutes later he scored from the penalty spot for a 3-2 Roma win.

On Sunday, he did it again, albeit in a game which Roma were winning easily, 2-0, when he came on for the last half hour. However, the way in which his magical touch set up a third Roma goal for Bosnian midfielder Miralem Pjanic was enough to send the Roma fans into all too predictable delirium.

As Totti did a lap of honour at the Olympic Stadium on Sunday, accompanied by his children Cristian and Chanel, many were wondering if this was a definitive adieu or just the beginning of a long goodbye. Time will shortly tell.

In the meantime, only two questions remain to be resolved by next weekend’s last day of the Serie A season. Firstly, which side will finish second, namely Napoli or Roma? This is not an academic issue since second place means automatic qualification for the group stage of the Champions, whilst third place means the pre-season qualifiers (in which late starting Italian teams have a poor record).

Napoli, two points ahead of Roma, are the obvious favourites, given that their last game is at home to relegated Frosinone whilst Roma are away to AC Milan, themselves in search of points to guarantee a Europa League berth.

As for the other issue, that is simple. Can Napoli’s inspirational Argentine striker, Gonzalo Higuain, become the all time leading goalscorer in Serie A. Currently, that title is held by Swedish legend, AC Milan ace Gunnar Nordhal on 35 goals. Higuain scored his 33rd goal of the season against Torino in a 2-1 win on Sunday night, so he is within closing distance of Nordhal. Another two or three goals from Higuain would be a fitting end to a splendid season for him. Put simply, for many, he has been the player of the year in Italy.