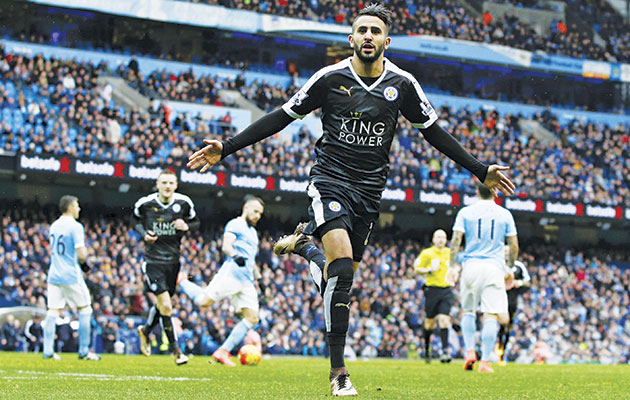 When Leicester City beat Manchester City 3-1 in February – and made everybody wake up to the fact they might actually be serious title contenders after all – they had 36.1 per cent possession and their pass completion rate was just 64 per cent.

Previously there had been a consensus of opinion, informed by the success of Barcelona under Pep Guardiola, that possession was key. Johan Cruyff kept telling everybody that if you have the ball, the opposition can’t score. Dominate possession; pass, pass, pass; grind the opposition down with the attrition of constant movement and exploit the spaces when they occurred. It was what the best teams did, celebrating their mastery by hogging the ball. Football, it seemed, had moved into a new phase.

Ever since the 6-3 defeat to Hungary in 1953 – England’s first defeat at home to non-British or Irish opposition – there has been a tendency to blame failure on, initially, a lack of passion and desire, and then, in a more considered way, a lack of technique. English players, columnists and coaches agree, aren’t good enough on the ball, don’t practise technique enough early in life, play on pitches that are too big, and prioritise pace and stamina.

The cry went up after the 3-1 beating by West Germany in 1972, after the 2-0 loss to Holland in 1977, after the embarrassments of the early 1990s and Euro 2000, after the 3-2 defeat to Croatia in 2007. But while this may have some basis in fact, it doesn’t explain how England, with such supposedly inferior technique, were able to win the World Cup in 1966. Or why English sides were able to dominate European competition in the 1970s and the 1980s. Or why two English clubs were able to contest the Champions League Final in 2008 – a game that, for all the influx of foreign players, kicked off with 10 Englishmen on the pitch.

The truth may simply be that there are many ways of playing football and that, when things go wrong, all countries have a tendency to believe they should adopt the qualities of their vanquishers. Brazil, for example, was obsessed throughout the 1970s and 1980s by the notion that its football needed to be more physical – something it has achieved with dismal results.

After Barcelona’s thesis of radical possession came Jose Mourinho’s antithesis of radical non-possession, exemplified by Internazionale’s 1-0 defeat and 3-2 aggregate win with 19 per cent possession at Camp Nou in the Champions League semi-final in 2010. What European football is seeing now is the synthesis, a consensus based on hard-pressing and rapid transitions. Even Barcelona have begun to counter-attack more.

Leicester, as perhaps is fitting for a smaller club, lie at the radical end of that.

There has been much talk in the Premier League of the rise of the middle, how the incredible wealth of the new television deals means that being inordinately rich, in the way of Roman Abramovich or Sheikh Mansour are, is no longer the advantage it once was.

Leicester’s average possession this season has been 43.7 per cent: the third-lowest figure in the Premier League. Their pass success rate is 69.3 per cent – which is not merely the lowest in the Premier League but the fifth-lowest of any team in the top tier of any of Europe’s major five leagues.

Leicester’s pass completion rate is low not because of any technical failing, rather because of the way they play: the much-circulated rat-a-tat of passes in the win over Liverpool is proof of that. Their game plan is relatively simple. They sit deep and look to draw the opposition on. The two central midfielders, N’Golo Kante and Danny Drinkwater, shield the back four. The two wide midfielders, Riyad Mahrez and Marc Albrighton, drop back when required to form the classic two banks of four, and the second striker, Shinji Okazaki, falls back to add an additional man when necessary. 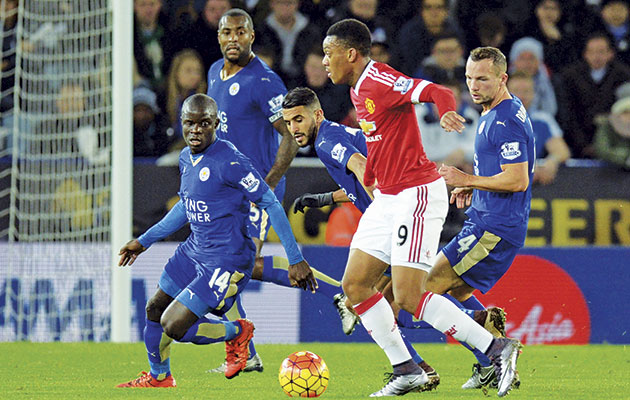 Leicester City provide a defensive shield that few players have been unable to penetrate.

When they get the ball, they spring forward at pace. Sometimes that involves running with the ball, as Kante and Mahrez did so thrillingly for the second goal against City, but more commonly it means hitting quick passes towards Jamie Vardy, who is not merely rapid but has become increasingly intelligent in his movement over the past couple of seasons. Those passes offer high reward – Vardy either being set clean through against the goalkeeper or getting a run at a defender – but they also risk losing possession. The point is that it’s a risk worth taking.

There’s perhaps a broader lesson here: just because it’s simple doesn’t mean it can’t be effective. Jurgen Klopp mentioned after Liverpool’s league defeat to West Ham United in January that his defence couldn’t handle Andy Carroll and suggested his side could have achieved something similar by focusing on crossing to Christian Benteke. He’s trying, of course, to shape the club to his philosophy but it did rather raise the question, why not? Many Manchester United fans, similarly, seem to feel a little uneasy about the tactic of long diagonals towards Marouane Fellaini, as though such a tactic doesn’t quite befit a club of their stature.

Leicester’s rise is slightly freakish, an extremely rare coincidence of almost an entire team hitting the form of their lives simultaneously. And they have benefited from the fact that big sides seem not to have taken them seriously enough to make real efforts to counter their strengths. But they also offer hope
to smaller teams, showing that having big-name players on big wages isn’t the only way to prosper.

Sometimes, having decent players working to a system that gets the best out of them, that makes them greater than the sum of their parts, can be enough.