A team plays two games in four days. It uses the same formation in both matches and draws both 0-0. The first is dismissed as a lumpen disappointment, the second hailed as a heroic – if fortunate – point.

The team shape goes from being outmoded and dull to solid and dependable. Context in football is everything, but the Republic of Ireland’s European Championship qualifiers against Slovakia and Russia demonstrate the changing role of 4-4-2.

It has become the horror-movie villain of formations, repeatedly written off only to thrust its hand through the soil and grab the heroine’s ankle just when it seemed safely dead and buried.

Five days before Ireland’s qualifier against Slovakia, Manchester City had hammered Tottenham Hotspur 5-1 at White Hart Lane in a game that seemed to emphasise just how moribund 4-4-2 had become.

Spurs tend to play a 4-4-1-1 these days, a halfway-house formation whose characteristics are largely determined by the player who operates between the midfield and the central striker. When Wayne Rooney was deployed there for Manchester United, his energy and willingness to drop deep meant that he often seemed to be playing as an advanced ball-winner, effectively giving United an extra half-man in midfield. Rafael Van der Vaart, though, is a far less tenacious, far more static presence, and so Spurs were stuck with just the two central midfielders.

When a central midfield two meets a central three the pattern is predictable. The three tends to dominate possession in the central third of the pitch but, if the two can win sufficient ball and transfer it rapidly to the wide midfielders, it can still be dangerous. Spurs benefited from that in Milan last season when Wilson Palacios and Sandro had sufficient verve to live with the pedestrian trio of Mathieu Flamini, Thiago Silva and Gennaro Gattuso, allowing Gareth Bale and Aaron Lennon to rampage on the flanks. 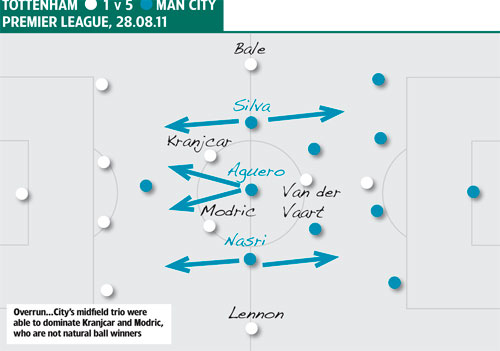 Against City, though, perhaps in part because injuries meant Harry Redknapp was forced to field Luka Modric and Niko Kranjcar, neither of them natural ball winners, in tandem in the centre, Tottenham never had sufficient control of the ball. City’s 4-2-3-1, with a highly fluent three, overwhelmed Spurs in the middle. While Spurs did look dangerous when the ball was worked wide to Lennon or Bale, that happened only fleetingly and after Peter Crouch had missed two fine opportunities, City crushed Spurs with a relentless inevitability, their football vibrant and their midfield domination irresistible.

The problems 4-4-2 has in creating against well-organised opposition were apparent again the following Friday as the Republic of Ireland struggled to break down a defensive Slovakia. 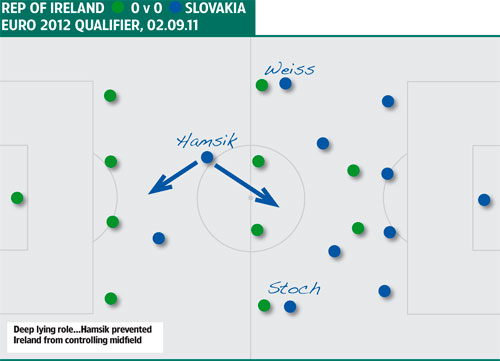 On one flank Damien Duff and Miroslav Stoch cancelled each other out, on the other Aiden McGeady and Vladimir Weiss spent the game fruitlessly chasing each other.

With Ireland overmanned three to two in the centre of midfield thanks to Marek Hamsik’s deep-lying role, there was rarely any chance of finding a foothold there and no sparkling individual capable of producing a chance from nothing with a moment of individual brilliance. By the second half the game was in a torpor, with one side intent on holding out for a 0-0, the other lacking the wherewithal to stop them.

The Slovakia game was Giovanni Trapattoni’s 36th as Ireland coach. In only three of them has he strayed from the 4-4-2 template, so it was little surprise when he retained it for the game away to Russia. This time, though, the mindset was very different. Ireland – having been outplayed by Russia in Dublin, at least until an improbable late fightback reduced the deficit from 3-0 to 3-2 – were in Moscow to survive. The lack of flair in the 4-4-2 ceased to be a problem, and instead the advantages of its stability were emphasised. 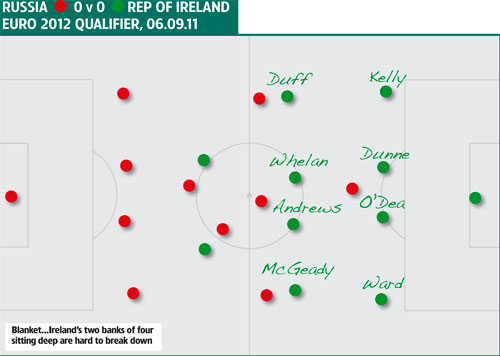 Ireland were lucky, of course. Shay Given made a number of excellent saves and Yuri Zhirkov hit a post, while Richard Dunne made a preposterous clearance off the line from Igor Semshov and went on to produce a memorable performance at centre-back, ending the game with staples in his face and his number felt-tipped onto a fresh shirt after cutting himself on a grating as he clattered off the pitch in making yet another brave challenge.

The solidity of Ireland’s tactical base meant their luck could be capitalised upon. The Spanish coach Juanma Lillo, a mentor of Pep Guardiola, railed in an interview about what he calls “prophets of the past”, those who interpret events backwards from their outcomes. He’s right: a winning coach has not always got his tactics right, and a losing coach has not always got them wrong. What matters is whether a coach has shifted the percentages as far as possible in his team’s favour. Had Ireland conceded, it wouldn’t have invalidated Trapattoni’s thinking; he set his team out in the best possible way to frustrate Russia.

Two banks of four sitting deep is very hard to break down. Leaving two men forward becomes a percentage option because it essentially means a side doesn’t have to worry too much about creating. The other eight outfielders can focus on defending and then getting the ball forward quickly and hoping one or other forward can manufacture a shot or, failing that, win a throw-in or a free-kick.

There’s nothing new in that. Robbie Fowler and Michael Owen, for instance, never seemed comfortable playing together for Liverpool, but in February 2001 they played their part in an excellent 2-0 win away to Roma, menacing enough to prevent the home side mounting an all-out assault and lethal enough that Owen scored twice when chances did occur in the second half. It was not particularly pleasing on the eye, but it was effective for a side expecting to be under pressure.

When 4-4-2 first emerged in the 1960s its principal aim was to bolster the midfield with an extra man. Now, the retreat of another forward has left that facet outmoded. The paradox is that, at least in Trapattoni’s model, playing two central strikers has become a more negative style of football than using only one.