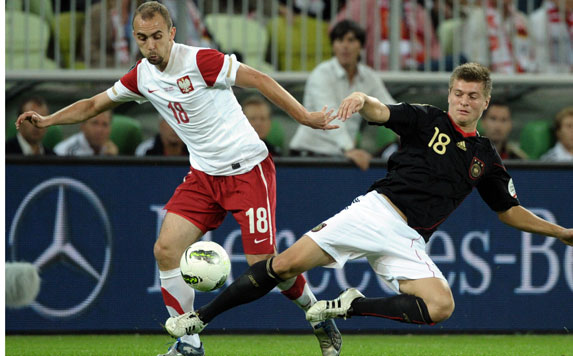 Turkish fans have few equals as far as enthusiasm for their club is concerned and those of Trabzonspor certainly held nothing back when the Polish attacking midfielder arrived in late June to complete his move from Polonia Warsaw. After he passed through passport control to be welcomed by club officials, supporters of the Black Sea outfit promptly hoisted Mierzejewski onto their shoulders and carried him to a waiting car. No “welcome to hell” here.

But after the warm greeting, the playmaker – who can also operate as a left-sided creator – has a great deal to prove over the coming season. Trabzonspor have identified him as the ideal supply line for marksmen such as Burak Yilmaz and Halil Altintop, while back in his homeland the media will be keeping a close  eye on him in his first spell in a foreign league. The £4.6million Trabzonspor spent on him is the biggest transfer fee anyone has ever paid for a Poland-based player – the previous record being set last year when Borussia Dortmund paid Lech Poznan £4.1m for striker Robert Lewandowski – and, with the European Championship on home soil just around the corner, Mierzejewski cannot afford any slip-ups in what will be the most vital of campaigns.

Not that he should have any problem delivering the goods in Turkey. Voted Poland’s player of the year last season, he established himself as one of the most accomplished performers to have emerged from the Ekstraklasa in quite some time and there is every reason to believe that his skill, vision, energy and pugnacious character will make him extremely popular in Trabzon.

“The good thing about Adrian is that there are many facets to his game,” says Poland coach Franciszek Smuda. “He can play in several different positions in the middle of the field, has a smart football brain, is a leader and, apart from his flair for setting up chances, he likes to battle and impose himself too.

“He’s only been in the national team for a-year-and-a-half, but he’s growing in assurance with each appearance and you could see the confidence rise up in him when he scored his first goal for us in our win over Argentina at the end of last season. It has lit a spark in him, I think.”

From the north-eastern Polish city of Olsztyn, a conurbation principally known as the base for a Michelin tyre factory, his career to date has been more one of steady acceleration than burning rubber. Starting out at hometown club Stomil, he subsequently featured for Wisla Plock and on loan at Zaglebie Sosnowiec before signing in 2008 for Polonia, where he slowly but surely metamorphosed into their main man.

Poland will hope to be blown along by a gusting Black Sea wind next summer.