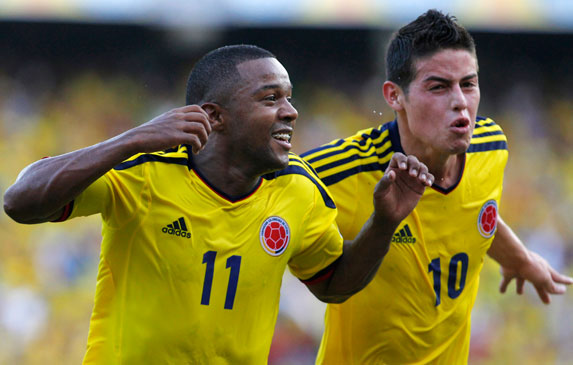 When Leonel Alvarez took charge of his first competitive game as boss of Colombia – after stepping up from the post of assistant coach following the off-field scandal that forced Hernan Dario Gomez’s resignation – he retained the team structure he had inherited and the vast majority of the personnel for the opening World Cup qualifier away to Bolivia.

He did, however, stamp his own mark on the side with the return of Dorlan Pabon on the right wing.

“With Dorlan we’re looking to attack down the flanks,” said Alvarez before the game. “He can also play up front. He’s in good form. He can score goals, set them up and he’s matured a lot.”

Before October’s game, Pabon had only flickered briefly for his country. All but two of his seven previous caps had come in brief substitute appearances and he had not played for Colombia in almost a year. But Alvarez’s decision to bring him in proved thoroughly justified.

As Bolivia pushed forward their high defensive line was unable to cope with the sustained pace of Pabon. In the first half he came close three times, and he then opened the scoring after the interval, getting behind the defence once more to beat the goalkeeper with a composed, patient little chip at the far post.

The goal set up Colombia for a 2-1 victory – the only away win in the first two rounds of South America’s qualifiers – and not many sides are likely to match their achievement at the extreme altitude of La Paz.

While the nippy winger may have got his country off to a flying start on the road to Brazil 2014, his own path in life has been far from easy. The youngest of six children, his father died before he was born, throwing his mother into a crisis of alcohol abuse. He was farmed out to an aunt and football became his escape.

“I would play with nothing on my feet and no shirt,” he recalls. “I would pick up a ball and be playing from 10 in the morning until seven at night.”

Those long hours honed a natural talent. Quick and stocky, he held his own as a teenager in the second division with the now defunct Bajo Cauca, moving into the top flight in 2008 when he joined Envigado, Medellin’s third force. After a tentative first year he exploded in 2009, winning his first international caps at the tail end of the 2010 World Cup qualifiers.

He made the move to Medellin giants Atletico Nacional in the summer of 2010 and has continued to make steady progress. Fitting perfectly into coach Santiago Escobar’s 4-2-3-1 formation, he played a big part in the side’s apertura success this year, using his pace to beat defenders and set up others, or cutting in and shooting on the run with either foot.

Although Atletico Nacional hope to see off interest from Europe and Argentina, keeping hold of Pabon for next year’s Libertadores campaign, events in Bolivia might just have made their task that little bit harder.