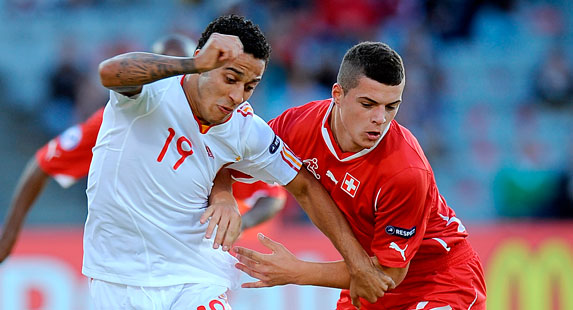 Switzerland internationals with Kosovan roots are all the rage at the moment, with no less than five of the Nati that faced England in June’s Euro 2012 qualifier hailing from the former Serbian province. And while Basle’s Xherdan Shaqiri maybe the current pick of this ethnic Albanian crop, team-mate and fellow midfield creator Xhaka is an equally exciting prospect.

At his most comfortable in a central playmaking role, Granit Xhaka made his international debut in that 2-2 draw at Wembley, and with his cultured left foot, athleticism and energy he looks set for a golden future in the game – one far removed from his early career as an office assistant.

With Basle player since the age of 10, he was an influential member of the Switzerland side that won the world Under-17 crown in Nigeria and has been on a roll ever since, scoring on his club debut in a Champions League tie at Debrecen last year. Since then he has made an eye-catching contribution to his club’s domestic league title last term and forced his way into the plans of national coach Ottmar Hitzfeld.

However, despite the teenager’s talents, Basle coach Thorsten Fink knows he must handle his protege with care.

The risk of premature burnout is a constant cloud hanging over the latest young prospect and Xhaka’s injury record so far is not unblemished. He spent six months out with damaged cruciate ligaments as a junior, and then sat out the opening month of this season following more knee trouble during the summer. After covering so much ground in the last couple of years, the occasional pause may actually be helpful.

One pitfall he is unlikely to fall victim to, though, is conceit. Level-headed to a fault, he dismisses talk about a move abroad – “I don’t see the point in going overseas to sit on the bench” – and receives plenty of support from elder brother Taulant, the Basle central defender who he describes as “my role model”.

And his sibling is not the only team-mate offering him advice.

“But the problem we have here in Switzerland is that if someone juggles the ball three times he’s immediately called the ‘new Maradona’. To become a real star, you have to maintain high standards over three seasons at least. That said, I fully expect him to go on and make it big.”