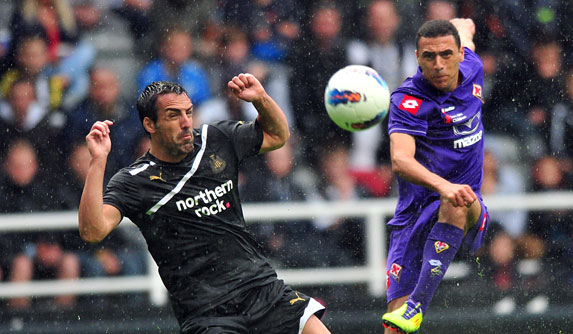 Normally, with their place in the following year’s Libertadores guaranteed, the winners of the Brazilian Cup usually take their foot off the pedal for the remainder of the domestic championship.

This year, though, Vasco da Gama have hit the accelerator. Even shrugging off the stroke suffered by their coach, Ricardo Gomes, they have kicked on in search of the league title, and key to their charge is the growing influence of 21-year-old Romulo Borges Monteiro.

“I look to go in hard, but only to get the ball,” says Romulo, who operates in the centre of a midfield three. “That’s why I don’t commit many fouls. Set-pieces are increasingly dangerous, so I try hard to avoid conceding them.”

However, it is after he has nicked the ball away from an opponent that Romulo really shines. He gives the pass and is already on the move to receive the return, supplying a pleasing fluidity and dynamism to his team’s play. He can also pick out a penetrative forward pass.

If Eder Luis down the right has often been Vasco’s most dangerous weapon, it is in part because Romulo has been winning the battle in the middle. And although he now fills a more defensive role than in his first-division debut season last term, he also has the lung power and technique to arrive in the box and finish in the air or on the ground.

As well as stamina, Romulo has also demonstrated considerable willpower to make his mark in Rio de Janeiro after humble beginnings in the remote north-eastern state of Piaui, which he left aged 15 and moved 400 miles away to join Porto de Caruaru.

A youth tournament in Sao Paulo in 2007 brought him wider recognition. Gremio were among those who were interested and he also trained with Benfica in Portugal and Atletico Paranaense. However, when Gremio’s director of football Rodrigo Caetano moved to Vasco last year he finally got his man, explaining: “I’m happy to have spotted the potential of a player good enough to play for Brazil.”

Romulo’s call-up to the national squad came for the two games against Argentina in September, for which only home-based players were considered. He sat out the first – a tepid 0-0 draw – but then helped to give the team rhythm in a thoroughly satisfactory debut in the return, which Brazil won 2-0.

It was a performance that stakes a claim for promotion to the full-strength squad and Romulo says: “I have to keep thinking about getting better; trying to shoot more at goal, for example.”

The 21-year-old has already done enough to become a significant force in the Brazilian championship and, with child-like enthusiasm, he says: “Now when people collect a sticker album, my sticker is in there too. It’s amazing, something I never imagined.

If his current progress can be maintained, Romulo may well have the chance to collect himself again when the 2014 World Cup sticker album appears.