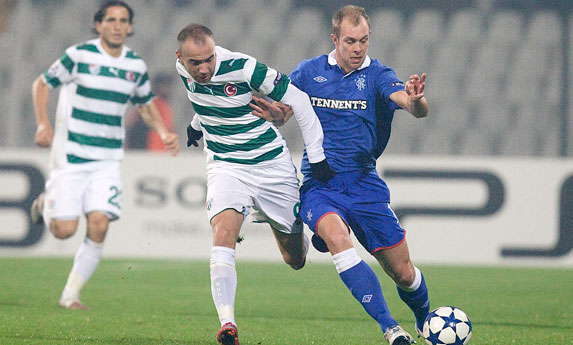 As the launch pad for the career of Hakan Sukur in the early 1990s, Bursaspor do not have to try too hard when making their case as being the cradle of Turkish attacking excellence.

But while the future UEFA Cup-winner with Galatasaray was essentially a target man, and a real force in the air, the latest prodigy of the “Yesil Timsahlar” (green crocodiles) is quite another front-line species altogether. Quick, mobile and technical, he can play in any number of roles, including lone spearhead, second striker, left-winger or creative midfielder.

Never more dangerous than when running at defences from deep, Sercan’s principal asset is
his extreme pace – which makes him ideal for counter-attacking strategy employed by Bursaspor coach Ertugrul Saglam, who led the club to the title in 2010 and third place last time out.

With Bursaspor from the age of 15, and a first-team regular for the past three years, Sercan does, however, have one obvious flaw: a tendency for wayward finishing.

Since scoring 11 times in the 2008-09 Turkish league campaign, he has only managed 11 Super Lig goals in total for the past two seasons and somehow he must find a way to be more clinical in the  danger zone.

“On occasions he does lack composure near to goal,” says former Bursaspor goalkeeper Omer Catkic, who now plays for Antalyaspor. “He has no trouble outpacing opponents or dribbling through one or two defensive lines, but then it gets complicated for him.

“But I’m sure he’ll learn not to be as wasteful. He’ll improve this aspect of his game with
more experience.

“He’s still young and everyone should have faith in his promise. He has rare gifts and, what’s
more, I see a player determined to succeed.”

The big question is how much longer will Sercan remain in the green and white of Bursaspor? He is reportedly keen to try his luck abroad and nearly signed this spring for Lokomotiv Moscow, before the deal fell through. Scouts from the Premier League and Bundesliga are also hovering with intent, although Bursaspor chairman Ibrahim Yazici won’t let his prized asset go cheaply, having signed him to a new four-year deal in August.