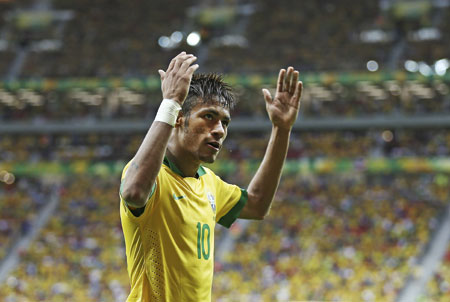 The Cristiano Ronaldo problem has become the Neymar problem. That both are superb players is not in doubt; both are supremely skilful, capable of a sudden and devastating acceleration, and both can turn games in an instant. But they can also be negligent of their defensive duties and allow the opposing full-back to get forward untended.

Ronaldo and Neymar may be match winners far more often than they are match losers, but both create tactical issues that have proved almost insoluble. Neither, it’s probably fair to say, is helped by having Marcelo, that least defensive of left-backs, playing behind them.

Last October, in a friendly against Japan in Poland, Brazil coach Mano Menezes found an innovative solution and used Neymar as a false nine in a 4-2-3-1 set-up. Hulk, who operated on the right, is no more inclined to track back than Neymar, but the deployment of Kaka and Oscar in the line of three offered energy and discipline. The result was a highly impressive 4-0 win – similar in scoreline but far more impressive than the 3-0 win in the Confederations Cup – but with the return of Luiz Felipe Scolari that experiment passed into history.

Perhaps, particularly given the industry of Oscar, Brazil could get away with Neymar if they had a more solid full-back behind him or a more defensive presence on the other flank – at Real Madrid, for instance, Angel
Di Maria’s diligence provides a useful counterweight to Ronaldo. With Marcelo tearing forward at every opportunity, though, and Hulk and Dani Alves presenting exactly the same issue on the right, Brazil are vulnerable to angled balls out to the flanks. There will be times – as in that breathtaking opening quarter of an hour against Mexico – when teams find themselves taking a pummelling, capable of nothing beyond desperately clinging on. But, equally, it’s easy to imagine Brazil being shredded by a smart side playing on the counter-attack with rapid wingers.

Of course, Alves or Marcelo are not bad players and both have almost precisely the attributes their clubs need most in a full-back. Alves, certainly, has been vital in the past four or five years. Barcelona regularly face massed defences and having a full-back who is quick, gifted technically and blessed with prodigious stamina is hugely valuable – not only for the width he offers on the overlap, but for the depth he gives to the attack.

Such is Barcelona’s control of possession that it hardly matters if Alves leaves space behind him. And even if he does, Gerard Pique is adept at stepping across, with Sergio Busquets filling in as an auxiliary central defender. It’s not complicated, but takes practice to get right and Brazil have not achieved it yet.

It’s been an ongoing problem for them and one of the reasons Alves, ostensibly a better player, has so often been left out by Brazil for the more defensively reliable Maicon. His problems, perhaps, reached their height at the Copa America in 2011 when Paraguay’s Marcelo Estigarribia attacked him with such gusto and effectiveness that he earned himself a wholly implausible move to Juventus. Brazil weren’t quite that vulnerable in the Confederations Cup, but equally there were major reasons for concern.

Scolari’s thinking, presumably, is that the two holding players – Paulinho and Luiz Gustavo in the Confederations Cup – can move out to the flanks to cover. That is how the 4-2-2-2 that has been the Brazilian default for three decades or so is supposed to function, with the two anchors and the two creators pulling out of the centre as necessary to create width or deny it to the opposition as the full-backs – or “laterals” to give the Brazilian name, which gives no indication of defensive responsibility – rattle up and down the flank.

The stereotype of Brazilian football as almost pathologically attacking hasn’t even been close to true for 30 years or so. Very few teams have a better defensive record than Brazil at World Cups, and when they won in 1994, and again under Scolari in 2002, the real strength was their defensive midfield pairing: Dunga and Mauro Silva in the USA, and Gilberto Silva and Kleberson in 2002 (albeit with a back three). As the full-backs – Jorginho and Branco in 1994, Cafu and Roberto Carlos in 2002 – pushed on, the midfield duo provided solidity, either dropping in as additional centre-backs or pulling wide into the space vacated by the forward surge.

Brazil are well-equipped at the back of midfield – Jean and Fernando offered back-up in the Confederations Cup, while Ramires and Lucas Leiva weren’t even selected – but there is little sign yet of this pairing offering the levels of backing required by the adventurous flanks. There must be concerns about how Paulinho so regularly seems to get dragged forward, which in turn exposes a back four made susceptible by what is essentially a man-to-man system that means enforcing an offside trap is all but impossible.

The flaw is not only worrying for Brazil, but also intriguing for Neymar’s prospects at Barcelona.

It’s probably true that no team has ever pressed so well as Barca at their peak under Pep Guardiola, and that requires extreme fitness, discipline and tactical intelligence. If Neymar is capable of that, he hasn’t shown it yet. It may be that, as a designated superstar, Brazil’s pretender to Lionel Messi’s crown, he has been indulged at home, but at Barca he will be forced to conform.

It may go against the grain to say it, but it’s plausible that by tempering Neymar’s natural flair, and inspiring a greater sense of defensive responsibility, Barcelona may make him more likely to be a World Cup winner with Brazil.