Perhaps Pep Guardiola’s greatest quality as a manager is his willingness to change his side’s style and formation according to circumstances and the opposition. He established a model of play at Barcelona – hard pressing and possession-based, rooted in the quick passing and mutual understanding fostered over years at La Masia – but then showed at Bayern Munich that he was willing to amend that.

And that’s one of the reasons why his arrival in England is so fascinating.

Not only will there have to be tweaks to deal with the challenges presented by the Premier League, the volume of games will make it harder for him to make those changes between matches.
Last season, City played 59 games in all competitions while Bayern Munich played 53, but that’s just part of the story. The Premier League is simply more physically demanding than the Bundesliga. As a rough measure of that, there are seven per cent more tackles in England than Germany, meaning more knocks, more attrition, more need for recovery. And that again has a twofold impact: it’s hard to press with the same rigour and there’s less preparation time between games because fatigued players can’t be drilled in the same way.

Early attention on Guardiola at City focused on the goalkeeping situation, which is understandable. After all, if the England keeper isn’t playing regularly, it has significant implications for the national team. Joe Hart is the biggest casualty of Guardiola’s ruthless demand that his keeper, just as much as his team-mates, should be able to pass the ball.

But that thinking has also been carried into the shape of the rest of the side – which, in the long term, is likely to be more significant. In Guardiola’s first Premier League game in charge, a 2-1 win over Sunderland, he started with a formation that initially seemed to be somewhere between a 4-1-4-1 and a 4-2-3-1. The initial surprise was David Silva appeared to be playing very deep, almost alongside Fernandinho. However, it soon became apparent that he was pushing up, and that he and Kevin De Bruyne were both operating as central creative midfielders who also worked back, as what De Bruyne described as “free eights”.

That perhaps requires some explanation. In the form of 4-3-3 that emerged in Holland and Germany in the 1970s, and was eagerly adopted by Argentina, the midfield was made up of
a holding player who would sit in front of the back four, an out-and-out creator at number 10, and a number eight who shuttled between the two.

The use of two central creators appears to be a growing trend. It was the idea that lay at the heart of Brendan Rodgers’ success at Liverpool – brief as it was – with a 3-4-2-1 in which the “free eights”, if that’s what we’re calling them, naturally gravitate into the awkward pockets left in a 4-2-3-1, wide of the holding midfielders but in front of and inside the full-backs. Even Jose Mourinho could argue that when he used Cesc Fabregas and Oscar in advance of Nemanja Matic at Chelsea in 2014-15 he was, in a slightly more reserved way, doing something similar.

For City, with Raheem Sterling and Nolito wide, that created a W-shape – and the structure does map that of the W-Ms that became the default in England between the late 1920s and the late 1950s. Although in England the wingers ended up dropping deeper as time went by, with one of the inside-forwards falling right back to become a bona fide midfielder, it’s the structure that underpinned the pattern-weaving approach of the Scottish passing game, of which tradition Guardiola is the leading modern avatar. There’s something almost unnerving about the thought that, physical development aside, the front end of Guardiola’s City closely resembles the shape of Queen’s Park in the 1890s.

The danger with committing two creators plus two wingers is the defensive deficit it could leave in midfield given the preference of modern full-backs for getting forward to support their winger. 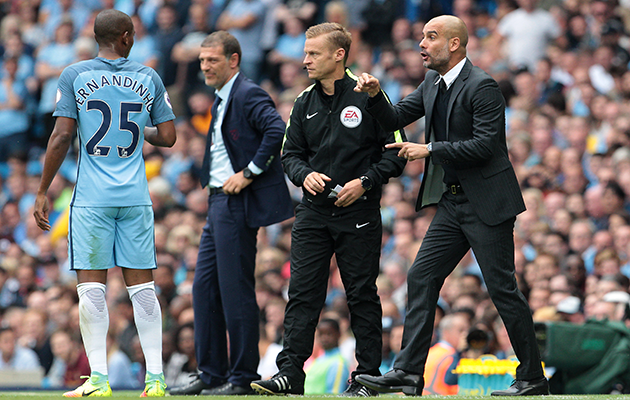 What Guardiola did at Bayern, and what he seems to be trying to do with City, is to cover that shortfall by having his full-backs play in an entirely different way.

Without the ball this season, City have operated a fairly orthodox back four, with the use of Aleksandar Kolarov as a central defender ahead of Eliaquim Mangala against Sunderland suggesting Guardiola’s insistence on the capacity to pass. With the ball, though, Bacary Sagna and Gael Clichy have drifted infield into holding midfield roles – as Philipp Lahm and David Alaba often did with Bayern – with Fernandinho falling back to a position just in front of the two central defenders. The shape then becomes something akin to the W-M.

No system is perfect, of course, and the instinctive reaction is to wonder if there are sufficient players wide, whether City will be able to stretch the play against a side that sits deep and packs the centre against them, and whether they will be vulnerable to counter-attacks down the flanks. Less significantly, there’s the issue of whether Ilkay Gundogan and Fernandinho will be able to play together now that the former Borussia Dortmund midfielder has recovered from his knee injury.

But already, Guardiola has had an impact. Already he is introducing shapes and patterns to the Premier League that, if they have been seen before, have not been for half a century or more.

There will be cynics who point out just how much City have spent this summer, but whatever their investment, the freshness of his imagination is clear.