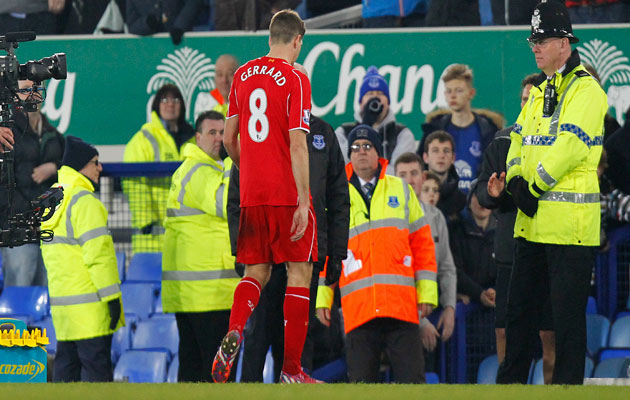 On Friday we asked what might lie in store over the weekend.

• Will Steven Gerrard’s final Merseyside derby be one to remember?
In a largely forgettable game, Gerrard was relatively annonymous in what will almost certainly be his final Merseyside derby match. The match finished 0-0 which means the Liverpool skipper ends with a impressive record of 17 victories, 11 draws and five defeats in 33 derby matches.

• Is Sunday’s showdown between Lyon and PSG a title decider?
No change at the top for the leading trio. Sunday’s 1-1 draw between leaders Lyon and Paris Saint-Germain followed an identical result for second-placed Marseille at Rennes, the previous day.  Lyon remain in the driving seat, two points clear of their closest rivals.

• Will Jurgen Klopp remain unsackable?
A confidence boosting away win at fellow strugglers Freiburg was just the tonic Klopp and his underperforming Borussia Dortmund players needed. The 3-0 victory –  their first since early December – lifted Dortmund off the bottom of the table and eased the pressure on the increasingly beleagured Klopp.

• Is a vote of confidence worth the paper it’s not written on?
Milan slumped to another defeat – their third in the last four league matches – to Serie A leaders Juventus. Despite being given a vote of confidence by the club’s chief executive, Adriano Galliani, last week, coach Filippo Inzaghi’s position continues to be the subject of much speculation.

• Is there any chance of Real beating Atletico?
Clearly not. Last season’s champions humiliated their neighbours with a resounding 4-0 victory at the Vicente Calderon stadium on Saturday. Real have failed to get the better of their neighbours in five and this defeat, their heaviest in the league in four years, showed they will have to wait to get this particular monkey off their back.

To complete the embarrassment, Real’s Ballon d’Or winner, Cristano Ronaldo, suffered the indignity of being mocked mocked by a fearless ballboy.

• Can Ghana and Ivory Coast produce a better match than the last time they met in the final?
Sadly not. The African Cup of Nations final was a near replica of that final from 23 years ago. Goaless after 120 minutes and ultimately settled on penalties with Ivory Coast once again holding their nerve in the penalty shootout.