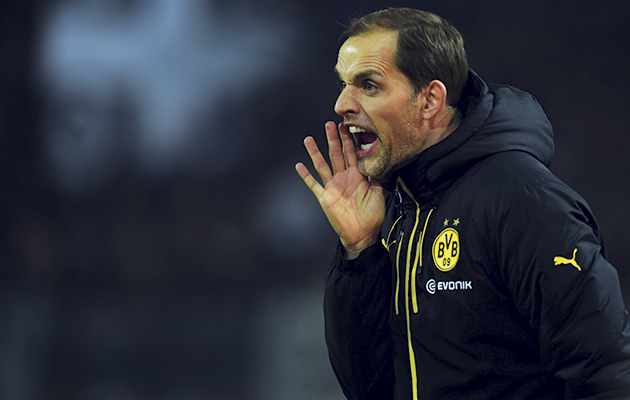 Reformer. Renovator. Revivalist. Only nine months into his reign as Borussia Dortmund coach, Thomas Tuchel is making remarkably light work of what many thought to be an impossible job: that of stepping into the shoes of the iconic Jurgen Klopp.

In the wake of Klopp’s shock resignation a year ago and the team’s mediocre Bundesliga record last season – at one point they were threatened with relegation before rallying to finish an underwhelming seventh – the Dortmunder were at the end-of-an-era crossroads, shorn of their much-loved leader and crying out for fresh ideas and impetus.

When Tuchel arrived at the Westfalenstadion in July, the widespread assumption was that he would need time to implement his vision. But clearly the 42-year-old ex-Mainz boss had not read the script. His re-energised team were victorious in their first five Bundesliga games and have since emerged as the only real challengers to Bayern Munich’s domestic hegemony.

That Dortmund have managed to keep pace with Bayern in the 2015-16 goalscoring stakes speaks volumes for the firepower that Tuchel has unleashed; and whether it be in the Bundesliga, German Cup or Europa League, their football has often been spellbinding, electrifying, fluid and ruthlessly flamboyant.

His Dortmund exist to dominate and the beauty of his design is that they can achieve this state of grace in so many different ways: through the young midfield passing machine Julian Weigl, the brilliant link-up play of Ilkay Gundogan, wide man extraordinaire Marco Reus, and the goals and creativity of Henrikh Mkhitaryan.

And then there’s the current African Player of the Year, Pierre-Emerick Aubameyang, who in the last 18 months, has transformed himself from erratic speedster winger to predatory central striker.

A weapons-grade attack if ever there was one. Not that Tuchel’s side are the finished article yet.

Defensively they can be vulnerable, conceding twice as many Bundesliga goals as Bayern, while their 5-1 capitulation in Munich in October was a stark reminder of how far they still have to go to match the exploits of the Klopp years: the Bundesliga crown in 2011, the league and cup double the following year, and the runners-up spot in the 2013 Champions League.

Tuchel’s reaction to defeat by Bayern said a lot about the man. No excuses, alibis or tribal disappointment, just a heartfelt homage to Bayern and opposite number Pep Guardiola. The message? Where Bayern lead, we should follow.

“Thanks to Jupp Heynckes [Bayern’s former coach], Matthias Sammer [the Bavarian club’s director of sport] and especially Pep Guardiola, Bayern have left everyone else behind with their emphasis on constantly improving levels of performance,” commented Tuchel.

“It makes no difference whether Bayern are playing in Mainz, Darmstadt or are at home to Dortmund. They always have the hunger.

“For all their talent, they operate with modesty. They see it as their duty. It’s the root of performance sport.

“We want to create the same atmosphere of greatness at Dortmund. We must aim for their cohesiveness, their feeling of invincibility and ability to rise to the occasion. However, as we saw today, we’ve a gap to make up.”

There speaks Tuchel the perfectionist. Yet take Bayern out of the equation and Dortmund are in rude health indeed. At this season’s winter break they were 23 points better off than at the same point in 2014. And not only have they regained their status as the number two power in the land, they have consolidated it, leaving clubs such as Wolfsburg, Bayer Leverkusen, Schalke and Borussia Monchengladbach trailing in their wake.

“Our hope was that Thomas Tuchel would make a great impact here with his input and sense of strategy, but he’s exceeded all our expectations,” declared club general manager Michael Zorc.

“Though I’m not one to resort to superlatives after just a few months, I do believe that in this particular phase, he’s the perfect coach for us.” 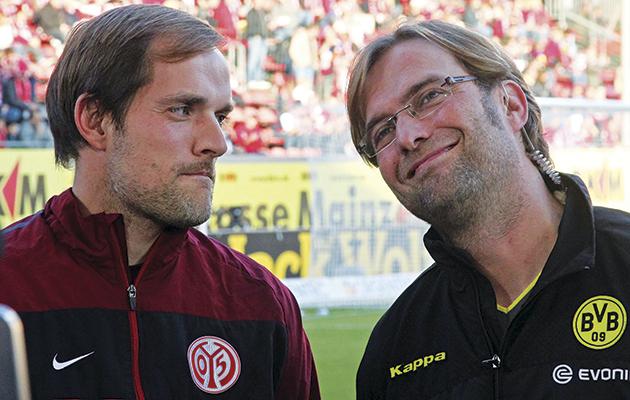 While the focus inevitably is on Tuchel’s ability as a coach, it often goes unreported that he was a fine teenage footballer.

An intelligent and resourceful defender, he twice helped the Augsburg youth team lift the German Cup and in the 1991-92 campaign he was good enough to win three caps for his country’s under-19 side.

That, however, was as good as it got.

At second division Stuttgarter Kickers he appeared only rarely in the first team and after four seasons in the third-tier Regionalliga with Ulm, he was forced to retire at the age of 24 because of a serious knee injury.

As the new century dawned, he turned to coaching at VfB Stuttgart, initially taking charge of their under-14s, then assuming responsibility for the under-19s. In 2006 he passed his full coaching licence with the second-highest score of his intake and returned to his old Augsburg stomping ground to do sterling work at their academy. Two years later he was appointed youth-team coach at Mainz and immediately led his side to the national championship.

His big break arrived just four days before the start of the 2009-10 Bundesliga campaign. With Mainz reeling from a first-round German Cup defeat by the minnows of Lubeck, and the air thick with rumours of a mutinous squad, the powers-that-be rang the changes, sacking coach Jorn Andersen and replacing him with Tuchel.

It proved to be an inspired decision as the former junior-team boss immediately unified the dressing room and subsequently worked a modern-day footballing miracle, establishing an unfashionable provincial outfit as a top-flight force, assembling an attractive, winning team on a shoestring and twice qualifying them for the Europa League, in 2011 and 2014.

It is no coincidence that, in the last decade-and-a-half, Mainz have launched the stellar coaching careers of both Klopp and Tuchel. For long-serving general manager Christian Heidel – who is due to leave this summer for Schalke – promoting talented leaders from within makes perfect sense. “The idea of experience is overrated,” says Heidel. “We’ve often kept faith with inexperienced guys already working for us. Expertise and character are more important. After all, the size of a pitch for a youth game is exactly the same as for the seniors.”

One game from the end of the 2013-14 season, a full 12 months before his contract was due to expire, Tuchel announced the end of the affair with Mainz. Club president Harald Strutz was convinced his coach could have behaved in a less high-handed way, calling the manner of his departure “borderline”, yet ultimately he could do nothing about it.

Unable to take another job without Mainz’s approval, Tuchel would have to take a year-long sabbatical, and after a string of flattering if not irresistible job offers from Schalke, Hamburg, Stuttgart and RB Leipzig, he was finally wooed by the prospect of running the post-Klopp show at Dortmund.

That Tuchel has settled in so well, so quickly at Dortmund, is mainly because he has not started from scratch. Rather than ripping up the entire Klopp playbook and forging a completely new playing identity at the Ruhr outfit, he has simply set about building on his predecessor’s legacy.

While far from renouncing the Klopp commandments – the aggressive pressing, supersonic transitions, power, pace and vibrancy – the Tuchel approach is much more refined and structured. “Kloppball” often was wild and uncontrollable. Tuchel, though, insists on a 50-50 mix of brain and heart.

Without the ball, the Dortmund class of 2015-16 can either relentlessly squeeze or sit off and, for the new man in charge, possession is all important. Whereas Klopp’s charges invariably went straight for the jugular, Tuchel preaches patient probing and control, precisely circulating the ball while waiting for holes to open up – then flooding in for the kill.

To Tuchel’s immense credit a Dortmunder on the ball always has multiple options, and in their ability to conjure numerical overloads they are absolutely stunning.

Unsurprisingly for a coach who sees Guardiola as the fount of all knowledge, Tuchel also prides himself on his tactical flexibility. A most astute game analyst and swift to respond to opposition power plays, the Dortmund boss usually goes with a 4-2-3-1 formation, but has all manner of shape-shifting back-up plans to call on: perhaps a 4-3-3, maybe a 4-1-4-1 or even the 5-3-2 he recently used in the goalless draw at home to Bayern in the Bundesliga.

No team of Tuchel’s is ever under-prepared or poorly rehearsed. Some play 3D chess; TT attempts the same on turf.

After five years of overachievement at Mainz with a group of middling professional and up-and-coming youngsters, Tuchel has proved equally shrewd in his new role as a man-manager of star names. High-maintenance professionals need to be handled with care and it says much for Tuchel’s powers of persuasion that everyone in the Schwarz-Gelben dressing room immediately bought into his message. 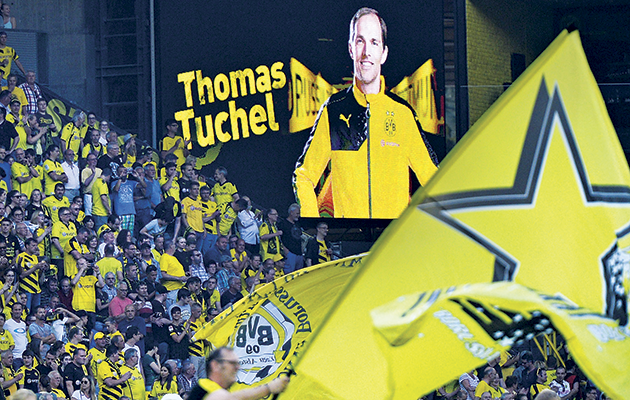 Leader…Dortmund fans show their support for the coach

Players who sense their coach is a winner only rarely fail to jump on board.
So much the better if he also is a superb training-ground teacher, a specialist in bringing about individual and collective improvement.

Occasional bouts of self-effacement are a useful motivational tool as well and he has said: “I can’t win a game on my own. The team can get by without me.

“I’m just trying to help. To identify things, to establish basics or to get the guys on the pitch to come together. Ultimately, my task is to engage with all the needs of the players. The stadium is the stage of the players.”

His interpersonal skills were especially apparent in his successful efforts to revitalise Armenian wide playmaker Mkhitaryan who, after a disastrous campaign in 2014-15, was on the verge of quitting the club.

Convinced that “Miki” had the talent to become the heartbeat of his side, Tuchel made it a pre-season priority to boost the former Shakhtar Donetsk star’s morale. What a good job he made of it too, with the player coming good in a blaze of assists and goals this term.

“The coach played a huge part in my comeback,” says Mkhitaryan, who has been linked with Juventus. “He spoke to me a lot. He understood what he had to do to make things better for me. To get me to grasp the psychological fundamentals. If I missed a good chance, I used to take it so badly that I wouldn’t sleep that night. Now, I’ve learnt to savour my performances.”

Tuchel once likened his technical area vocation to that of a “contractor” – which is a most inappropriate description for one of Europe’s brightest and best young football thinkers.