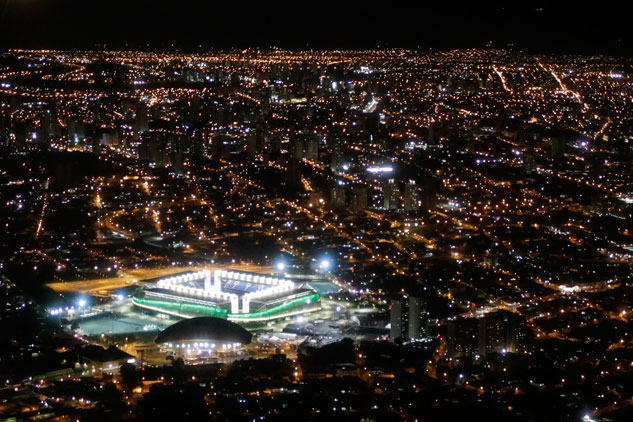 The flag has been lifted and the wacky race is underway.  The 2015 Brazilian Championships has kicked off, and over the weekend the opening round highlighted some of the good and the bad sides of the competition – which now features a game a week kicking off at 11 on Sunday morning.

A country of this size, with such a strong footballing tradition and so many important clubs could hardly fail to produce an intriguing domestic league.  Over the next seven months new players will make their names and there will be plenty of shocks; on Sunday, for example, Avai, everyone’s relegation favourites, ended up unlucky to draw 1-1 with Santos, who had just been crowned champions of Sao Paulo state.  Rio champions Vasco da Gama, meanwhile, were held at home to a goalless draw by unfashionable Goias.

The fact that these State Championships only came to a climax on the previous Sunday creates an obvious problem for the national competition; leagues need a pause from competitive games to whet the appetite for a long campaign.  Without one, the big kick off inevitably loses some of its appeal, and this was reflected in the disappointing average crowd figure of just over 12,000 – a figure that owes a great deal to the near 30,000 attendance at the Palmeiras v Atletico Mineiro game that started the action on Saturday.

Atletico fielded an understrength side – as did all five of the clubs who later this week are fighting for a place in the quarter finals of the Copa Libertadores.  This is another organisational howler; starting the league at such an important moment of the continental competition is a recipe for ruining the first round.  What should be the biggest nationwide party of football is obviously undermined if the five best teams are full of reserves.

One of the five paid a heavy price for their selection policy. Internacional were beaten 3-0 at Atletico Parananense, who were thought to be mired in crisis.  Two of the five emerged victorious despite fielding weakened line ups.  Sao Paulo beat Flamengo 2-1, a testimony to the strength in depth of their squad, and to the way that tactically things have fallen into place since Milton Cruz took over caretaker charge.

Corinthians also got off to a winning start with a weakened side – aided by the fact that opponents Cruzeiro are also in the Libertadores and also fielded a much changed team.  Corinthians were also helped by the venue.  Cruzeiro were the hosts, but the game did not take place in their city of Belo Horizonte, but 1000 miles away in Cuiaba’s Arena Pantanal.

This was the consequence of a punishment Cruzeiro received for fan behaviour at the end of last year.  But this will be a trend during the competition – teams ‘selling’ some of their home games to the more remote stadiums built for the 2014 World Cup.

There are two main problems with this practice.  Firstly it clearly infringes the ethics of a league campaign, based on the concept of all the teams meeting each other home and away.  And second, while these games give the new stadiums something to do, they run the risk of proving counter-productive.  The only way that these stadiums will be viable in the long run is if the local teams are able to build up a following big enough to fill them on a regular basis.  Their task is surely complicated by these visits from big name glamour teams from elsewhere.  The Cruzeiro-Corinthians game, it should be added, attracted a crowd of under 12,000.  And in order to accommodate this match, the local state final, between Cuiaba and Operario, was switched to the inhospitable hour of 3:40 on Monday afternoon. 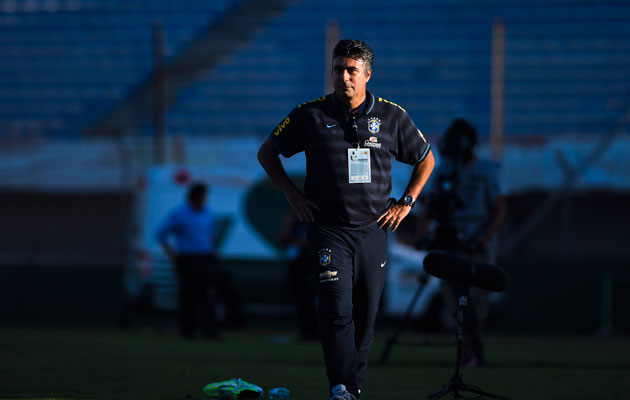 The CBF, meanwhile, were busy being inhospitable to Alexandre Gallo, the coach who had been in charge of Brazil’s youth structure.  He was sacked on Friday night.

This clearly is a consequence of the election last month of Marco Polo del Nero as CBF president.  It was clear that Gallo did not enjoy his full confidence – but the surprising aspect is the timing of the move.

Gallo is a bright coach, who obviously failed to put his ideas into practice at the start of the year in the South American Under-20 Championship, when Brazil came fourth and played very badly.  Had he been sacked then it would not have been a bombshell.  But to get rid of him after he had called up the squad for next month’s World Cup at the level is strange indeed.  It could be that his decision to exclude Gerson of Fluminense, mentioned here last week, was the final straw.

It could also be that this is a move to strengthen senior coach Dunga, with whom del Nero seems besotted.  Gallo was to have taken charge of next year’s Olympic team.  That responsibility now passes to Dunga.

The news was announced at a strange time – late Friday night, where it was ‘buried’ by the start of the Brazilian Championship.  On the previous Tuesday Dunga had held a press conference to announce the Copa America squad.  Could the decision to sack Gallo not have been announced then?  Or might this have placed Dunga in an awkward position?  Being party to a decision to sack Gallo after he had called up his squad might not have shown Brazil’s coach in an especially honourable light.