Tim Vickery’s Notes from Brazil: Dunga has much to ponder

One of the most interesting aspects of the Brazil squad to face France and Chile later this month is the recall of Real Madrid left back Marcelo, called up for the first time since the World Cup.

At the age of 18, Marcelo was given his debut in one of the early games of Dunga’s first spell in charge, against Wales in London back in 2006.  The youngster capped a memorable debut with a fine individual goal.  But Dunga quickly tired of him, seemingly unimpressed by his attitude.

Marcelo played only one of Brazil’s 18 qualifying games for the 2010 World Cup, and was not taken to the tournament.  He made sporadic appearances under Mano Menezes, before becoming Luiz Felipe Scolari’s undisputed first choice during the 2013 Confederations Cup.

Dunga left him out of last year’s post-World Cup squad, and singled him out for criticism for his performance in the 7-1 semi final defeat to Germany.  Marcelo’s recall, then, might be seen as something as a surprise.  Does coach Dunga now consider that the Real Madrid man has matured?  Or is he worried about the lack of game time at Chelsea of Filipe Luis, first choice in all six post-World Cup matches?

And what will Dunga do with his attack?  The big change since the World Cup has been the replacement of a target man number nine, Fred, with a more mobile striker, Diego Tardelli.  When Tardelli was unavailable for November’s friendlies, there was a return to a more traditional type of centre forward with Luiz Adriano of Shakhtar Donetsk.  He has now been left out, and while Tardelli is included, his chances of a long term international career may not have been boosted by a recent move to China.

In the last game against Austria, Roberto Firmino of Hoffenheim came off the bench to score a cracking winner, but he is a relative unknown in Brazil, which often makes a player vulnerable.  What, then, of the option of introducing Philippe Coutinho on the left and freeing Neymar to roam across the line?  Coutinho has been included in Dunga’s squads, but has only made sporadic appearances off the bench.  His natural position would seem to be that filled by Neymar.  He has come on four times, three of them for Oscar, who would appear to offer more defensively.  Coutinho in place of Tardelli, however, would not leave the team so open.  Has Dunga been studying this alternative?  Last week he told a Brazilian TV station that Liverpool play a 4-4-2 system –  an error for which he was much criticised, and which would seem to indicate that he has not been following Coutinho very closely.

Especially in the light of Sunday’s action, the absence of Corinthians goalkeeper Cassio is hard to justify.  The hero of the 2012 Club World Cup final, Cassio was in magnificent form in the local derby against Sao Paulo, even saving a penalty from rival Rogerio Ceni as his team won by a single goal.  Coach Tite called for Cassio’s promotion to the national team in the post-match press conference. 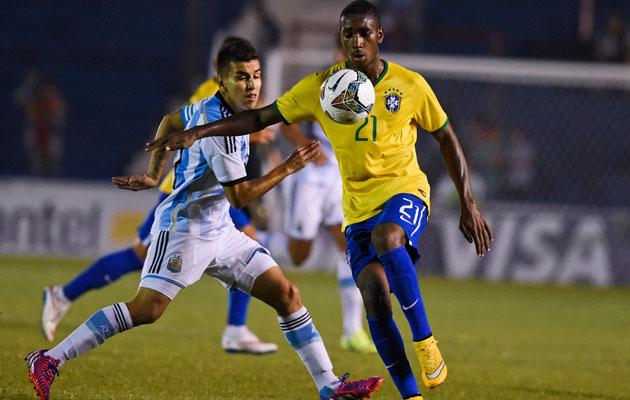 One to watch…Gerson made an instant impace on his debut for Fluminense.

Likely first choice Jefferson will be in the second division when Brazil’s national championships kick off in May.  The Botafogo keeper was beaten three times on Sunday as Fluminense came from behind to win 3-1.  None was his fault.  One of those goals was a magical moment which could turn out to be a significant milestone.

World Soccer recently picked out Gerson as one of the stars of the South American Under-20 Championships, which came to a close a month ago in Uruguay.  Just 17, the left footed midfielder provided the best moments in a desperately disappointing Brazil campaign.  He filled the notebooks of European scouts and there were rumours of interest from Juventus.  It all seemed a bit premature for a player who had yet to make a senior appearance for his club.

After the tournament, though, Fluminense rushed him into their starting line up.  Sunday’s match was his first in the Maracana stadium, and he marked it with his debut goal, making a strong run before slotting his shot across Jefferson and into the far corner, putting his team into the lead at 2-1.

The opportunity was set up by a clever dummy from Fred, who had come up with a similar piece of quick thinking on the equalising goal – and who sealed the win with a superb piece of control and a cool left foot finish.  The much maligned centre forward gave a man of the match display – and though he might have been chosen as one of the chief villains of the last World Cup, his presence is helping groom a 17 year old of rich promise who might go on to make some history of his own in future tournaments.

If Sepp Blatter must go, so too should Michel Platini