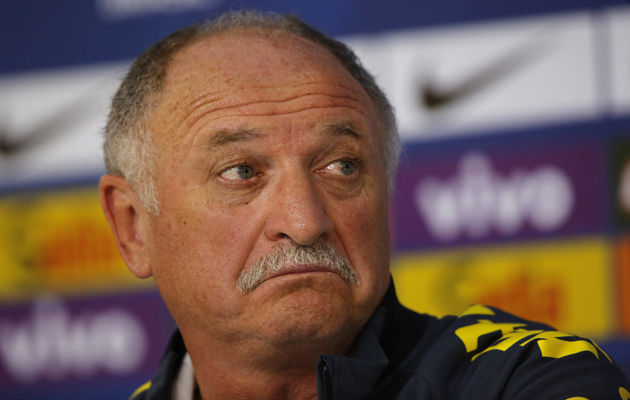 Luiz Felipe Scolari has a shot at redemption this Thursday.
Time will never erase the painful fact that he was in charge of a Brazil side beaten 7-1 at home in a World Cup semi final.  But steering his Guangzhou Evergreen side to a surprise victory over Barcelona in the Club World Cup would do wonders for his reputation – and surely ease some of the torment he has been feeling ever since helplessly watching his men taken apart by Germany on July 8th2014.
Four years ago the career of another Brazilian coach was changed for ever after a Club World Cup clash with Barcelona.  Lionel Messi and company humiliated the Santos of Muricy Ramalho – up to that point the undoubted king of the Brazilian Championship.
Ramalho was the high priest of pragmatism.  His teams were usually big and strong, dangerous from set pieces and made no concessions whatsoever to aesthetics.  “If you want to see a spectacle, go to the theatre,” was one of his favourite lines – until it was made redundant by the manner in which Barcelona danced their way through his defence.
“We were beaten by a football that we did not even know existed,” said the Santos president after the game.  Ramalho went with what he knew – three big centre backs – and then cut a pitiful figure on the bench, squirming in agony, pulling his cap over his face as if he wished he were anywhere else.
Ramalho’s subsequent sides have tried to pass the ball more.  And now he takes over Flamengo after a spell out of the game – first for health reasons and then because he spent some time in Europe,  he has come back drooling about Barcelona, their youth work and their collective idea of play.  It will indeed be fascinating to see how much of this he tries to put into practice in his new post with the Rio giants.
If Muricy Ramalho’s defeat to Barcelona in 2011 was mainly conceptual and tactical, then the crushing blow suffered by Scolari in 2014 was above all emotional.
Some six months before the last World Cup Scolari and his staff gave a lecture to an audience of Brazilian coaches.  They over-flowed with confidence.  Anyone able to bottle and sell it would have made an instant fortune.  Scolari and co celebrated their achievements in 2013; they had found their team and their method of play, and they had rallied the supporters to the cause.  The hard part, they said, had already been done.
This is the background to that strange quote from the camp when the players first met up before the tournament.  “We already have one hand on the cup,” said Carlos Alberto Parreira, Scolari’s co-ordinator.  And it also helps explain what happened over the next few weeks.  Little by little, as Brazil’s players came into contact with harsh reality, all the overblown overconfidence evaporated to nothing.  It did not take long to find out that the Confederations Cup was one thing, and the World Cup quite another.  Dreams of winning were replaced by fears of losing.  By the semi final, without Neymar and Thiago Silva, the team were ready to fall over on their own in a stiff breeze.  Even someone like Fernandinho, who if not especially inspired is usually efficient, could not be counted upon to perform basic functions.

Brazil’s Fernandinho looks distraught as Brazil concede yet another goal in their 7-1 defeat to Germany.

All of this was evidence for the view that Scolari had got it wrong in terms of emotional preparation.  His man of destiny braggadocio had been the main reason for his appointment at the end of 2012.  But he had allowed himself to get carried away.  “We weren’t prepared to face adversities,” said centre back Dante.
After the tournament sources close to Scolari say that the coach feel into a deep depression.  His attempt to return to work, at his welcoming old home of Gremio, almost certainly came too soon.  Guangzhou has given him a chance to make a fresh start.  And on Thursday he will surely relish the fact that his team will be the underdogs.  Barcelona will be expected to take the initiative, and while there is no score Scolari can beam happily.  Twenty years ago his Gremio side held Ajax to a 0-0 draw in the final of the old Inter-Continental Cup, before succumbing on penalties.  Something similar this time will do plenty for Scolari’s prestige.  But the old fox will surely be hoping that his men can sneak a win – which would remind the football world that Scolari’s coaching CV includes much more than a 7-1 defeat.