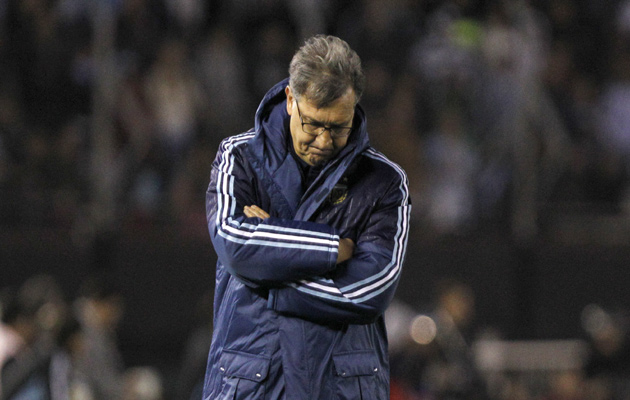 Brazil struggled to make it to the 2002 World Cup, and Argentina had a nervy ride before booking their place in the 2010 tournament. South America’s marathon qualification campaign offers few guarantees – though it does promise to be a hard grind, with the two traditional giants having to administer the occasional mini-crisis before getting themselves safely over the line.

In the race to Russia 2018, a mini-crisis could turn into something more serious for the loser of the clash of the titans in Buenos Aires a month from now – especially if Argentina are beaten. Brazil have three points in the bag and a home game to Peru a few days later. Argentina have one point, no goals and the prospect straight afterwards of a long and difficult trip north to Colombia. Argentina’s situation after four rounds could be bleak indeed, especially as both Lionel Messi and Sergio Aguero face battles to be fit in time.

uyjhThese, then, are testing moments for coach Gerardo Martino. In his successful spell in charge of Paraguay, Martino was impressively versatile. He got off to an awkward start in the 2007 Copa America, when his attempt to impose an attacking style came unstuck in a 6-1 quarter final defeat to Mexico. It caused a rethink, and in the build up to South Africa 2010 Martino fashioned a side that could take the initiative when possible, and hold the opposition at bay with traditional Paraguayan resilience when necessary.

With his native Argentina, though, Martino has been less flexible. More than a year into his reign, all the talk has been of the implantation of “an idea of play” which “is not negotiable.”

Brazil, especially with Neymar back from suspension, will put these words to the test. Because the great Brazilian strength is the counter-attack – and the very problem with Martino’s Argentina, abundantly clear in the home defeat to Ecuador and also apparent in the goalless draw with Paraguay, is that the team can be stretched out and open to fast-breaking opponents.

Martino is the latest Argentina coach to struggle to balance out a side in a variation of a 4-3-3. The main problem is the lack of pace at the back, meaning that the defensive line drops deep and there is too much space between the sectors of the side. The coach might feel that he has made some progress with the introduction against Paraguay of young Matias Kranevitter alongside Javier Mascherano, the addition of a second holding midfielder providing extra cover. But it came at a cost. The coach conceded after the Paraguay game that his side had lacked fluency, and that the midfield elaboration had been better against Ecuador. He highlighted “the effort and the attitude of the players” – words often trotted out in the absence of anything better to say.

But what will be saying after the match against Brazil? And what will his opposite number Dunga be saying if Argentina rally and his side are beaten? After the opening day defeat against Chile, Brazil’s morale was boosted by a 3-1 win over Venezuela. Dunga celebrated by awarding his side 8.5 out of 10 – but was accused of wishful thinking by the ever-wise Tostao, who drew attention to the poor performances of the opposing centre backs, and the fact that Willian was only Brazilian to shine. Moreover, “Venezuela had the same spaces to play in as Chile. They just did not take advantage of them.”

The centre forward of the great 1970 team is concerned. “I had no worries about Brazil failing to qualify,” he concluded. “But after the first two rounds and the wins and good performances of Ecuador and Uruguay (Chile’s were expected), this has changed. The chance of Brazil missing out is minimal, but it exists, given that there are about seven teams at a similar level.”

Dunga is also coming under fire for dropping goalkeeper Jefferson after the game against Chile – blaming for, as Tostao put it, “ a goal that not even Neuer would be able to keep out.” It is true that Jefferson has not looked entirely convincing for the national team – but his replacement, the promising Alisson of Internacional, appeared even more nervous against Venezuela. The criticism has been especially strong in Rio, where Jefferson plays for second division leaders Botafogo, and some of the press will be gunning for Dunga if his side go down in Buenos Aires. An away win, meanwhile, would leave Gerardo Martino under real pressure. It is only the third round of a marathon campaign, but the stakes are already high for both coaches in the coming South American ‘super-classic.’