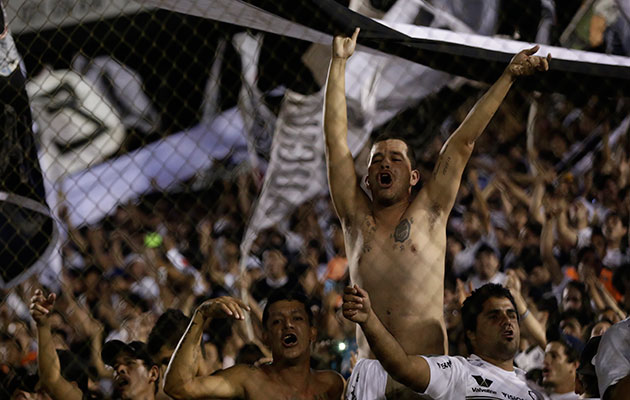 It did indeed prove to be a dramatic week in the life of Colo Colo, Chile’s most popular club – though not all of the drama was predictable, or welcome.

On Wednesday they lost the final of the cup to one of their great Santiago rivals, Universidad de Chile, who prevailed after a penalty shoot out.  Colo Colo’s task in Sunday’s final round of the league was to preserve their lead against Universidad Catolica, their other main local rivals, and seal a 31st title.

To be sure of ending the year on a high, Colo Colo had to win away to Santiago Wanderers of Valparaiso.  The players were out on the pitch and getting ready to kick off when they found themselves sharing the field with hundreds of brawling supporters.  There had been flashpoints of violence in the streets of Valparaiso, and these scenes were now repeated inside the stadium.  The referee concluded that the game could not go ahead.

As it happened, Colo Colo won the title without having to play.  Catolica were beaten 1-0 away to Audax Italiano – spurning the chance of a first half equaliser when international winger Mark Gonzalez had a penalty saved.  To complete a miserable day for Chilean football, the last two minutes of stoppage time were not played when Catolica fans began lobbing seats onto the pitch.

Similar last day drama between the big two went off in Uruguay, thankfully without excesses of hooliganism.  Diego Forlan’s Penarol edged a nervy 1-0 win over Juventud de las Piedras, good enough to hold off the challenge of historic rivals Nacional and wrap up another title win – though not one which will live long in the memory.

Events in Paraguay, though, might well be recalled for some time to come, as a title race between the traditional big two took an unexpected twist.  With two rounds to go, Olimpia had a seemingly unassailable five point lead over Asuncion rivals Cerro Porteno.  Title number 40 appeared a formality, especially as Olimpia were playing their last two matches in the city’s principal stadium, Defensores del Chaco, effectively home ground.  But they lost 1-0 to modest General Diaz – and then were held to a goalless draw by little Deportivo Santani.  Cerro Porteno, meanwhile, won both their matches, the second a hard fought 3-2 victory against Sol de America.

Level on points, the two giants will meet midweek to decide the title – and it could have ended up even worse for Olimpia.  Santani had a man sent off with five minutes to go.  Olimpia poured forward in search of a title-clinching goal, and in the last attack of the game, they were caught on the break.  Victor Aquino, Santani’s substitute striker, latched on to a pass and steered past the keeper  – but the goal was disallowed for a debatable offside (see below at 6 min 50 sec).  Had the linesman kept his flag down, then Cerro Porteno would be the improbable champions – as it stands, the momentum is surely in their favour in the build up to the decider.

All of these southern cone title races were between big, traditional sides from the capital city.  Further north, the Peru Cup is intended to combat the excessive centralisation of much of South American football.

The competition is open to clubs who are outside the two national divisions.  It gets underway in February, with matches frequently played in very rudimentary conditions.  It builds to a climax in December when an enticing prize is in sight.  The winner goes straight into the first division, and the runner up enters the second division.

The Cup can be the starting point for great things.  Juan Aurich of Chiclayo won the competition – on a penalty shoot out – in 2007.  Four years later they became the first team from the north of the country to become national champions.

The stakes are high, then, in the Cup semi finals.  The two losers go back to obscurity, while the winners meet to fight for the title, while also dreaming of the new challenges of the following year.  After the first leg, one of this year’s semis is looking tight – Academico Cantelao, from Lima’s port of Callao, have a 2-1 lead over Cristal Tumbes, from Peru’s extreme north, near the border with Ecuador.

The other tie, though, looks well on the way to being decided.  Defensor La Bocana, from the northern state of Piura, thrashed Alfredo Salinas 9-0.  In the second leg they will have to swap the heat of their native city for the cold mountain air of Cuzco state.  Even so, it would take a defensive disaster to deprive La Bocana of a place in one of the two national divisions – and the dream of meeting the likes of Colo Colo, Penarol and Olimpia in future continental competitions.