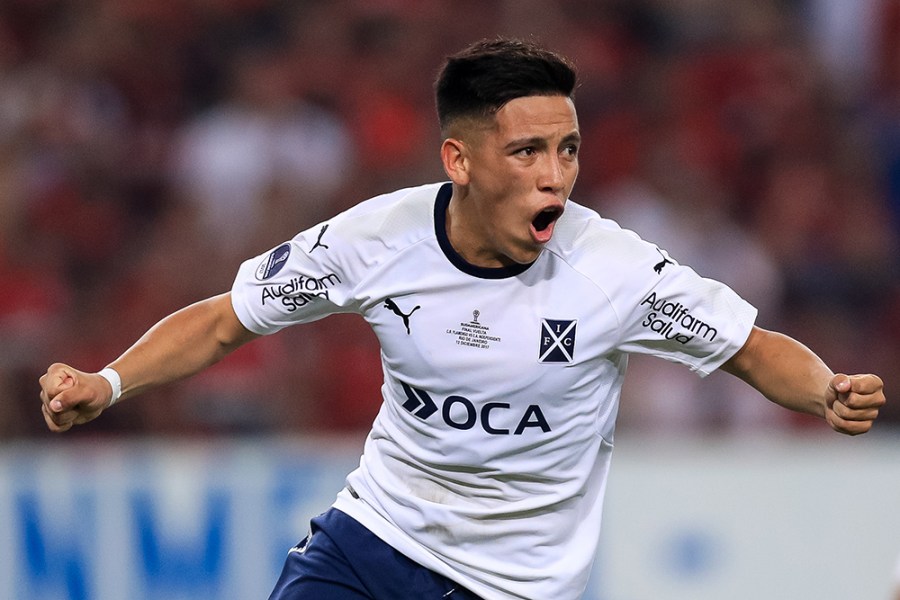 The Independiente playmaker was man of the match in the Maracana stadium as his side drew 1-1 with local giants Flamengo, completing a 3-2 aggregate win and claiming the Sudamericana Cup.

Not only did he twist the blood of the Flamengo defenders. He also stepped up to slot home the penalty that defined the tie, and ended up giving the famous Argentinian club their first international title in seven years.

It was a nerve racking moment – and a huge responsibility to be handed to an 18 year old. Barco took a while to compose himself, and then shot coolly home. He almost collapsed afterwards. It was a massive moment not only in the game, but also in his young career. This would be Barco’s last game for Independiente before heading north to Atlanta United in US Major League Soccer.

It might seem a strange option. It is one which would not have been advised by Ariel Holan, Independiente’s fascinating coach, with a background in field hockey. In a post match interview on the pitch Holan referred to family pressure on young kinds to accept the first bid, when a bit of patience to wait for the right bid might be better.

An alternative path is being laid down. Rather than going straight to Europe, South Americans – and it appears that Argentines have been especially successful – have the option of a move north.  And it is a chain of events which may yet have a beneficial effect on South American club football – which is badly in need of a boost.

Last week’s Club World Cup was the latest version of an annual horror show for a continent which cares so deeply about the tournament.  South American nurtures the dream of having a crack at the winners of the Champions League. But, year after year, it is uncomfortable viewing.

Gremio of Brazil did not let themselves down in their 1-0 defeat to Real Madrid in Abu Dhabi on Saturday.  They can, as they said, fly home with their heads held high.  But their claims to have taken on the Spaniards on equal terms are plainly absurd. They failed to manage a single shot on target in the 90 minutes, and only one shot that went wide, a free kick which swerved over the bar. Real, meanwhile, had 20 shots, seven of them on target and, without getting out of first gear, could easily have scored five or six.  The match, then, was the cruel annual display of the disparity of forces which now exists between top class football in Europe and the rest of the world.

From a South American, and especially a Brazilian point of view, this should be grounds for despair. A decade ago, Brazil’s economy was booming while Europe was mired in crisis.  And the country won the right to stage the 2014 World Cup.  Good times were predicted for the Brazilian game. In ‘Soccernomics,’ Simon Kuper and Stefan Szymanski made ‘rosy predictions for Brazilian football.’

It was a naïve lapse in an otherwise outstanding book, failing to take into account the huge failings in the game’s organisational structure. True, Brazil now has a collection of twenty first century stadiums. But it continues to operate with a nineteenth century calendar, and now that the economic boom has emphatically run aground, the gap with Europe keeps getting wider.

So what hope is left? The emergence of a consolidated, cosmopolitan league in the United States may represent a historic opportunity. There are obvious synergies in the idea of a Champions League for the Americas; the MLS has momentum but lacks tradition, the very opposite of the South American scene.  And in the middle lies Mexico, a large country whose clubs have mass support.

The Americas are vast. The logistical problems of a competition taking in north, central and south would be huge. But without some sort of external jolt, it has become hard to see a future for the South American club game as anything but an export industry. And so maybe the next time Ezequiel Barco comes to the Maracana, he will playing for Atlanta United in a big Champions League game.