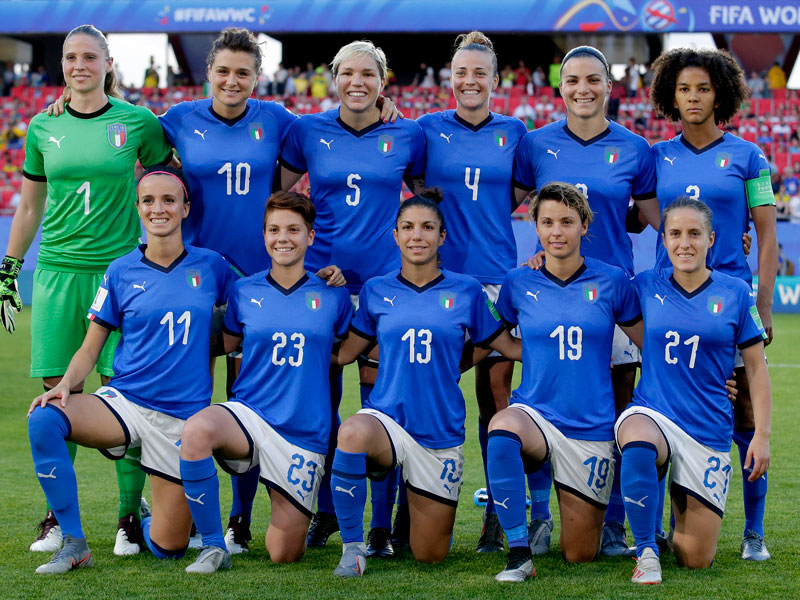 On the evening of June 18th this summer, did the Italian earth move under our feet? That was the evening when some 6.5 million Italian viewers tuned in to watch Italy play Brazil in the first round of the Women’s World Cup Finals in France.

Even if Italy lost the game on the pitch that evening in Valenciennes and even if they eventually went out of tournament (beaten 2-0 by Holland at the quarter final stage), the reality is that this summer’s World Cup represented a huge, potentially mind-changing triumph on the landscape of traditionally male-chauvinist and sexist Italy.

Italy is a country where the phenomenon of (male) football is every day lived out with an intensity that bears few comparisons. Yet, this summer, for a matter of days at least, Italy went through a cultural revolution as that intensity focussed on women’s football. No less than 24.4 million Italians tuned in to watch the Italian women for an average audience share of 31.8%.

It puts those figures into context when you recall that prior to Italy v Australia, no women’s football match had ever been shown live on RAI 1, the state broadcaster’s most followed channel. Indeed, until very recently, Italian media generally had shown a very limited interest in women’s football.

FIFA’s figures for the World Cup overall would suggest that this summer’s tournament was the most successful ever, one that might yet prompt meaningful change. More than 1.1 billion viewers worldwide followed the women’s Finals, representing an approximately 30% increase on the 2015 tournament.

In Italy, the enthusiasm was generated partly by the fact that Il Bel Paese had not qualified for a women’s World Cup for 20 years. Inevitably, too, many tifosi applauded the team for having done better than the men’s team who, after all, had failed miserably to qualify for the Russia 2018 Finals.

When Italy’s resident Foreign Press Association recently named its “Invictus” sports person/sports team of the year, the “Nazionale Femminile di Calcio” were an obvious choice for 2019. (Your correspondent should point out that he had a role in the selection of the award winners). The “Invictus” is awarded to those whose sporting achievements impact positively on the society around them and in that context, the Italy women’s team seemed totally appropriate winners.

Key to this success story is the Italian coach, Milena Bertolini. When she came to the Foreign Press club to collect the award on behalf of the team, accompanied by Juventus and Italy striker Barbara Bonansea,  she had much to say:

“Until recently, football was considered an essentially male sport in Italy and that was a difficult mentality to challenge. Yet, our terrific World Cup and the great spirit shown by the girls have struck a huge blow against this prejudice…”

53-year-old Bertolini, a former player, recalled how as a young girl, she cropped her hair short so that she passed unobserved in a boys team with everybody calling her “Mario”.   In those days, there was no girls’ team for her to join.

Barbara Bonansea told the same story, pointing out that she had started off in her brother’s team. It was only at the age of 13 that she joined her first girls team.

Ironically, women’s soccer in Italy is plagued by a heavily “masculine” lexicon. For example, Italians call the team coach, “il Mister”, a hangover which owes everything to the fact that the English introduced the game to Italy at the end of the 19th century. Thus Barbara Bonansea calls her coach “Mister”, even though that hardly seems appropriate.

Likewise, the expression “man on”, used by footballers to warn a team mate that an opposing player is closing in from behind, is “uomo” in Italian football. Similarily, “man to man marking” is “marcatura a uomo” in Italian. Bonansea says that this is “just a habit”, whilst Bertolini, not surprisingly, wants a linguistic overhaul, at least in Italian, saying:

“The terminology we use on the field is copied completely from male soccer. Our soccer is still in its early stages but I think it’s important that this should change… the word used most often on the field is ‘uomo’ and I don’t like that… We have got to work on future generations and give woman’s football its own identity”

A couple of days before Bertolini came to the press club to collect the team award, one of her squad players, Elena Linari, had surprised many by a public “coming out”, telling RAI 2 TV that she was lesbian. Linari, who plays her club football in Spain with Atletico Madrid, added:

“In Italy, there are still too many prejudices with regard to same sex couples… Here in Madrid, I have no problem, on the contrary… But in Italy, I am afraid to raise the issue because you never know what way people are going to react…

“In my private life, I want to be free to do as I desire. There are lots of (male) footballers who hide their (homosexual) preferences with another relationship, to avoid prejudices… And then, we should admit it, it is not that there are gays only in women’s football. There are plenty of gays in the men’s game, just as there are in other sports and in every walk of life…”

Both Bertolini and Bonansea expressed their solidarity with Linari, with Bertolini commenting:

Talking to World Soccer, Milena Bertolini suggested that much could yet be achieved on the back of the momentum created by the World Cup. For example, she says, the numbers of registered women players could be greatly increased, from the present 24,000 approx. to even as high as 100,000. (By comparison, the total number of registered players in Italy is one million approx.).

Both Bertolini and Bonansea believe, too, that the time for professional women’s football in Italy has come (strictly speaking, at the moment there is a €30,000 ceiling on players, who are all considered amateur). It is not so much a question of equal pay rights but rather of players’ protection for the after-football future, says Bonansea.

As both women reflected on their momentous summer in France, Milena Bertolini recalled the dramatic epilogue to Italy’s opening game against Australia. Having gone 1-0 down to Australia, Italy had done well to get back into the game through a 56th minute goal from Bonansea. By the time, the game went into time added-on, Bertolini was just hoping to hold on, saying:

“From the bench, I was shouting to the girls to hold onto possession, not to give it away because a draw would have suited us fine. Fortunately, the girls paid no attention…I still get the shivers when I think of Barbara’s second goal (in injury time) for our 2-1 win…”

Be it male football or female football, it seems, the “mister” can sometimes get it wrong.