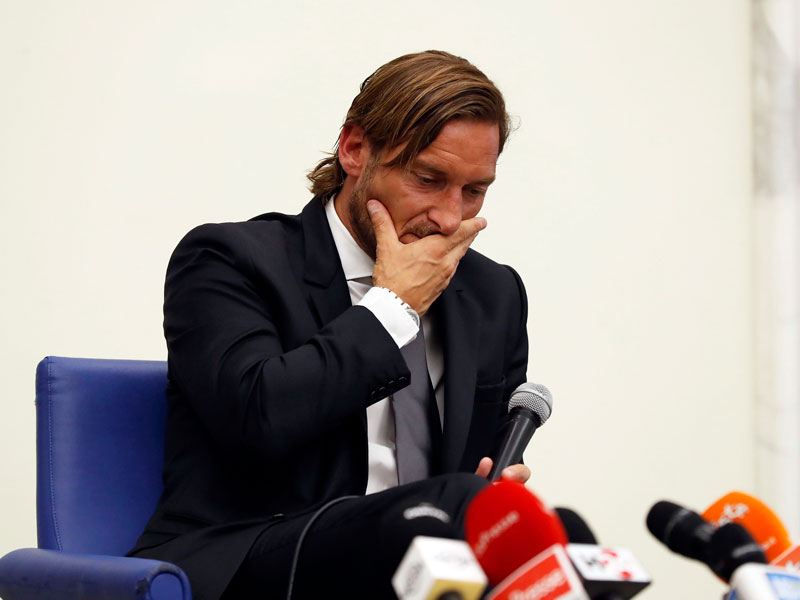 Farewell, my lovely. To the surprise of many, AS Roma icon and former great, Francesco Totti, is breaking up with his beloved club. At a mid June press conference, 42-year-old Totti announced that he was resigning his current director’s role and severing his connections with the club.

When Totti ended his playing career two years ago on an emotional night in Rome, we had presumed that the club’s most loved player would continue to work with Roma, in some sort of “management” role for many years to come. Not so, it seems.

In a extraordinary news conference, held at the headquarters of the Italian Olympic Committee (CONI) in Rome, Totti cut a remarkable figure. As he answered questions for 90 minutes seated under the imposing mural, “The Apotheosis Of Fascism”, a 1928 homage to Il Duce Benito Mussolini, he might have passed for the last King of Rome, despondently announcing his abdication.

After all, Roma has been his whole life, the club where he started off as a 12-year-old in 1989 and where he played out his entire career until 2017. Totti opened his press conference with words of almost operatic drama:

“At 12.41 on today June 17th I sent an E-Mail to the Roma CEO, Giudo Fienga, in which I wrote unthinkable words, handing in my resignation from Roma. I would rather have died…”

So what has prompted him to seemingly burn all his bridges with his beloved Alma Mater? Essentially, he wanted to point an accusatory finger at the club’s current co-owner, US billionaire and financial tycoon, James Pallotta, accusing him of having failed to understand the “romanità”, the peculiar Eternal City ethos, of the club:

“I never imagined it would get to this (resignation)… and it’s not my fault that I have taken this decision. I never had a chance, I was never involved in the technical side of the team… but certain people had a fixed idea that they wanted to sideline me…and the other Roman players as well…”

Put simply, Totti blasted the entire Pallotta regime, claiming that the fact that the President makes only occasional visits to Rome has totally undermined his ability to administer AS Roma well. With an absentee President, too many cooks spoil the broth whilst Mr. Pallotta is not well advised nor does he know more than 10% of what is going on at the club.

Furthermore, “the final word” always rests with “London” rather than with “Trigoria” (the Roma training ground).

This last comment was a reference to London based Franco Baldini, a former Roma employee who has served both as assistant manager to England (under Fabio Capello ) and as technical director to Tottenham Hotspur (under Andre Villas-Boas). In 2016, Baldini signed up to work for Roma for the third time in his career, as a “consultant” and international marketing expert. To some extent, Totti believes Baldini has been his bete-noire at Roma, being much listened to by Pallotta in a management context where Totti was out of the decisional loop and where little attention was paid to his observations.

For example, said Totti, I told the club not to buy Argentine Javier Pastore, acquired from Paris Saint Germain last summer for €24.7 million euro. He did not fit into (then) coach Eusebio Di Francesco’s 4-3-3 line out whilst there were question marks about his physical well-being, Totti had said privately at the time.

Totti would appear to have been right in that Pastore played only 12 Serie A games for Roma in a disappointing injury interrupted season. He also added that Di Francesco had asked the club for five players but that none of them had been bought.

Intriguingly, Totti admitted that he had talked to former Italy, Juventus and Chelsea coach, Antonio Conte, about taking the Roma job. Had Conte accepted the job, he would have stayed at Roma, he added.

When Totti went on to argue that Roma needs new ownership to win back its place at the top of Italian football, many observers speculated that he might be manoeuvring for a future return to Rome, under a new ownership. That certainly appeared to be the club’s reaction, as outlined in a communique on that same June 17.

“In relation to the repeated speculation that Totti might return to the club under a new ownership… we can only hope that this is not some sort of inappropriate warning of an attempt to buy Roma, a scenario that could prove to be very delicate given that Roma is a stock market listed company…”

As for Totti’s accusations, the club argued that it had been more than patient with its iconic star, having recently offered him the position of technical director, an offer apparently rejected by Totti. Acknowledging that it had been difficult for Totti to choose to leave Roma after 30 years, the club continued:

“Nonetheless…we can only point out that Totti’s perception of the facts and of the choices made by the club are invented and far from reality”.

Thus a disappointing season in which Roma finished 6th in Serie A, were eliminated from this seaon’s Champions League in the second round and ended up as qualifiers for next season’s Europa League, ended on a sour note.

Was the Totti rant much more than the usual, understandable melancholy of the great champion who, two years on, is still finding it difficult to develop his post-player career? Or is it possible that multinational corporate investors have difficulty assimilating the particular concerns, sensibility and pride of a very particular piazza, like AS Roma? For the time being, the jury is out.

Roma now move on to a new season, without Totti but with a new coach, Portugal’s Paul Fonseca, in charge of Ukraine side Shaktar Donetsk until this summer. Totti approves of this appointment, even thought he ruefully adds that it was made with no real imput from him.

As for Totti, the Italian Football Federation, UEFA or FIFA, or indeed TV punditry work may all await further down the road (he is already an “ambassador” for Euro2020). Fear not, we shall be hearing more of Mr. Totti.