The day after the Copa America Final, an Argentinian journalist was asked the question: “If you could choose one player from the Uruguay team to make Argentina better who would it be?”

Surely no coach has ever dominated a tournament the way Tabarez did at the recent Copa. After watching his side defeat Paraguay in the Final, he opted to stand to one side from the wild and joyous celebrations of his players and the predominantly Uruguayan crowd, typically underplaying his role in their first Copa victory for 16 years.

He had spoken during last year’s World Cup of his regrets about quitting the national team job the first time – after Italia 90 – and of how he felt he had left the job half-done. This time, he has completed it, and then more. In the three tournaments since his return – following Uruguay’s failure to qualify for the 2006 World Cup – Tabarez has taken La Celeste to two semi-finals (Copa America 2007 and World Cup 2010) and to a record 15th Copa title in July. And he has done it with a side that is clearly an embodiment of his philosophy.

There is a quote from Che Guevara on a wall at his home in Montevideo that reads: “You must toughen yourself without losing your tenderness.”

Uruguayan football has always had a toughness, a belief in the importance of garra, the mystical attribute which combines mental strength, street savvy and resolve. But as Tabarez admits, at times, most notably during the 1986 World Cup, that has led to thuggishness.

Under him, though, while the rugged edge has been maintained – as Sebastian Abreu pointed out, watching Diego Lugano lifting the Fair Play award was like seeing Osama Bin Laden with the Nobel Peace Prize – there is also a spirit of generosity about Uruguay. And in Diego Forlan, Luis Suarez and Edinson Cavani, they have one of the most fluid and potent forward lines in the world.

The team’s core strength, however, is Tabarez. Opting for a base 4-4-2, 4-3-3 or back three as appropriate, no other side, surely, has such flexibility from the same group of players, and that is testimony to the 64-year-old’s other great ability, which is to manage people.

When he gave his squad a day off at the Copa, they stayed together to watch Uruguay’s Under-17 side in the world championship in Mexico. Forlan has said that he thought team spirit was a myth until he experienced it with this Uruguay set-up. That sense of unity, of the club as a collective, is essential to Tabarez’s tactical scheming.

Paul Scholes noted recently that, during Sven Goran Eriksson’s reign as England manager, he felt players were “selfish”, focused on ensuring they looked good rather than the team playing well. But Uruguay have a sense of themselves as a collective, and faith in their coach. When Tabarez issues an instruction they follow it.

Uruguay actually looked defensively suspect in their first two games. The goal they conceded against Peru was the result of a long ball over the top that caught Lugano and Mauricio Victorino playing too high a line. Sebastian Coates, who would emerge as one of the stars
of the tournament, came in for Victorino for the second game, against Chile, but again Uruguay struggled with the depth of their line, this time leaving too much space between defence and midfield, in which Jorge Valdivia frolicked.

But from the third group game onwards – a 1-0 win over Mexico– that was far more emphatic than the scoreline suggests – Uruguay were back to the sort of solidity they had shown at the World Cup, and it was against Argentina in the quarter-final that Tabarez really came into his own. 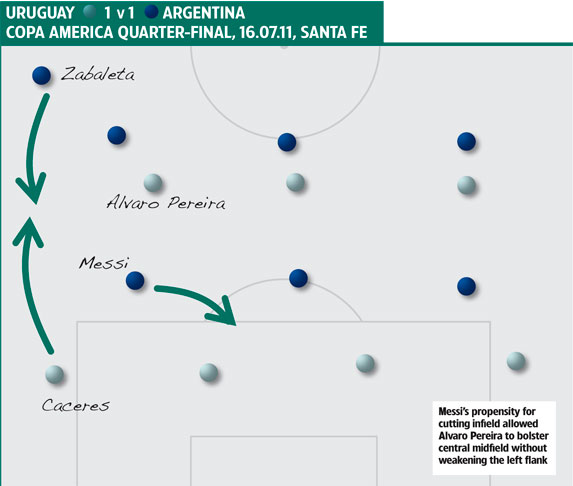 With Diego Perez sent off towards the end of the first half, and Argentina demonstrating the fluency that had characterised their win over Costa Rica, Uruguay seemed in trouble. Tabarez, however, pulled Alvaro Pereira into the centre, effectively leaving the left flank vacant. Usually that would be a recipe for the opposing right-winger to run riot, exposing the left-back. Here, though, the right-winger was Lionel Messi, who kept drifting infield.

Martin Caceres, Uruguay’s left-back, was therefore left with only Pablo Zabaleta, Argentina’s right-back, to deal with and their opponent’s one-man advantage was effectively negated.

In the semi-final, against Peru, Tabarez went with a back three. This time, Lugano, without fear of vacating the centre, was able to track Paolo Guerrero, who had drifted left throughout the tournament to link with Juan Vargas. With Alvaro Pereira, the left wing-back, negating William Chiroque, Uruguay had a man over in the middle and so dominated midfield. 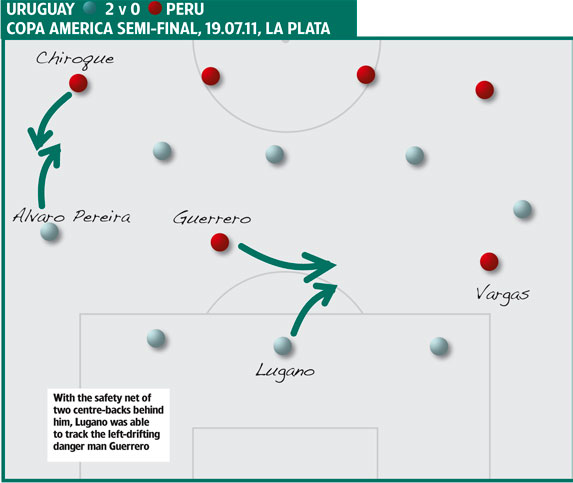 Uruguay’s 2-0 victory – on the small, stodgy surface in La Plata, where free-flowing football was all but impossible – may not have been aesthetically pleasing, but it was utterly convincing.

The back four returned for the Final against Paraguay who, having been undermined by injury, went with a 4-5-1 in which Nestor Ortigoza was deployed as a deep-lying playmaker. Paraguay’s game plan was all about slowing down the tempo, about restricting Uruguay, and so Tabarez insisted on a rapid start.

Edigio Arevalo Rios clearly had instructions to hound Ortigoza, closing him down with a ferocity that recalled Holland’s 1970s midfielder Johan Neeskens. Luis Suarez’s opener after
11 minutes came after two great saves from Justo Villar and a handball on the line from Ortigoza that went unnoticed by the referee. 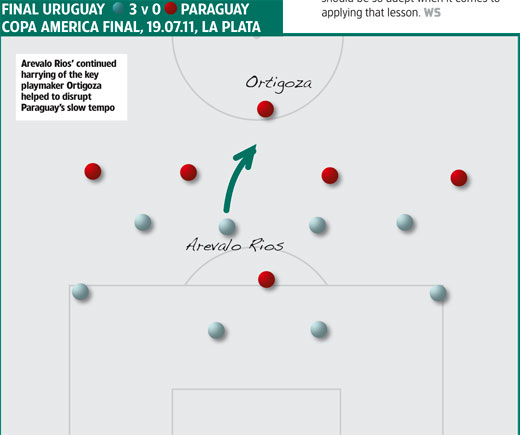 In terms of both personnel and set-up, Paraguay had no response. Arevalo Rios’ harrying set up the second goal, and Forlan added the third – and his second of the game – in injury time to seal a comfortable, overwhelming win for Uruguay, which was, yet again, a triumph for Tabarez’s tactics and, crucially, for the environment he has created that allows his tactics to be implemented.

Tactics never exist in isolation, they are always part of the greater whole. And, as the brightest educator can’t impart his wisdom unless the class is receptive, it’s hardly surprising to learn that Tabarez, as a former schoolteacher, should be so adept when it comes to applying that lesson.