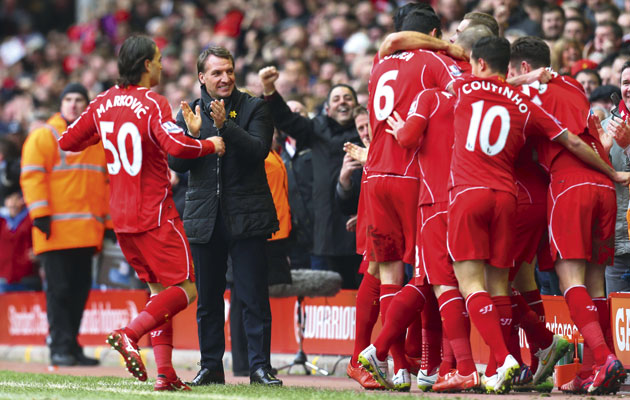 Liverpool’s season was transformed on December 14 when they lost 3-0 to Manchester United. In the 15 league games before that one, they had picked up 21 points and scored 19 goals; in the 12 games after, they won 30 points and scored 23 goals. For once, the reason for the change was obvious: Brendan Rodgers started deploying a 3-4-2-1 formation.

Up to the United game, Liverpool had been sluggish and error-prone at the back. They badly missed Luis Suarez, who had been sold to Barcelona in the summer, and Daniel Sturridge, who was injured. Questions were asked about Rodgers.

But while there are still those who find something unctuous about his manner and his habit of speaking as though quoting self-help manuals, the change he enacted over cannot be doubted.

The first game using the new shape may have ended in defeat, but the performance was much improved
and, had it not been for an inspired performance from United goalkeeper David De Gea, it may well have ended very differently. Since then, Liverpool have been the form team in the Premier League, playing slick, crisp, confident football, reinvigorating their challenge for Champions League qualification while pushing Chelsea to the limit in the semi-finals of the League Cup and reaching the semi-finals of the FA Cup. Only a penalty shoot-out defeat to Besiktas in the Europa League counts as a disappointment.

Put simply, the shape asks opponents questions they are not used to answering. Most teams operate with either one or two holding central midfielders. As soon as they face two central creators, particularly mobile ones who are adept at pulling wide and exploiting any space that appears behind the full-backs, that creates issues.

Even if there are two holders in opposition, these can be dragged apart, exposing the central defenders to either runners from deep or a centre-forward who drops off and can then turn and run at them. Raheem Sterling has excelled in that role, as has Sturridge since his return. The most obvious beneficiary, however, has been Philippe Coutinho, who is revelling in the space his new role allows him. Further back, the use of three central defenders screened by a holding player – Lucas Leiva has enjoyed a new lease of life – has eased some of the defensive worries.

The formation is unusual, but it isn’t unique. In September 2013, Bayern Munich beat Hanover 2-0. Pep Guardiola had been coach for a month-and-a-half and had lost only one game, the German Super Cup – a performance the club’s sporting director, Matthias Sammer, had described as “lethargic”. Guardiola spent the day after the game watching the video over and over, analysing, thinking.

As Marti Perarnau describes in his book Pep Confidential, after six hours he had a revelation: “We keep [Philipp] Lahm in the midfield. That’s not up for discussion. On either side of him, backing him up, [Jerome] Boateng and Dante, so that Lahm can make aggressive runs to break up the opposition. Bastian [Schweinsteiger] and [Toni] Kroos as attacking midfielders and then we delineate the movements.

“Rafinha and [David] Alaba are no longer full-backs at that point, they join the midfield. They occupy space slightly infield, although they can move to help [Arjen] Robben and [Franck] Ribery on the touchlines if it’s the right thing to do. When we are in possession, we play vertically, building from the superiority in midfield which the addition of Rafinha and Alaba has given us. If we lose the ball then we’ve all the right players located close to each other high up in the centre of the pitch: it’ll be easy to win the ball back.”

The shape was a 3-4-2-1, with Lahm operating as a defensive midfielder-cum-central defender, and Robben and Ribery given licence to roam the width of the pitch behind Mario Mandzukic, the understanding being that if they went inside, the full-backs would take up
their position on the flank.

CSKA Moscow were the first team to face Bayern in this shape and were beaten 3-0. The sterile possession that had characterised Bayern’s performance against Hanover was gone and something far more purposeful had taken its place. The following weekend, Bayern went out and hammered Schalke 4-0.

As Thomas Muller came to replace Mandzukic at centre-forward, there were games that season in which Bayern effectively played with three defenders, one of them stepping into midfield, and seven midfielders. This offered an astonishing fluidity, something that worked only because Bayern were so adept in possession and so good at pressing, something related to Guardiola’s habitual focus less on the basic lines of defence, midfield and attack than on overmanning constantly in key zones.

This being Guardiola, the system continued to evolve and, for the vital home leg of the Champions League semi-final against Real Madrid, he switched back to a 4-2-3-1. It was, he later admitted, the greatest mistake he had ever made as a coach. This season, Guardiola has continued his tinkering but the 3-4-2-1 has been one of his variations.

Its great advantage, for a team that plays like Bayern, is that – if required – it retains eight outfielders in the centre of the pitch, something that makes pressing and the recovering of possession easier, and also increases the number of passing options when Bayern are in possession. With the wing-backs and the two advanced midfielders having the flexibility to pull wide, though, it should mean that there is always the possibility of width.

Bayern, though, are a special case, a team whose fluidity defies crude numerical definitions, making the whole notion of formations seem a little simplistic, and it is Liverpool who are showing the possibilities 3-4-2-1 offers for less avant garde sides.

Perhaps opponents will in time come upon a way of countering it, but for now Liverpool are playing with a similar freedom and sense of excitement that carried them so close to the title last season. And for that Rodgers’ tactical switch must take credit.