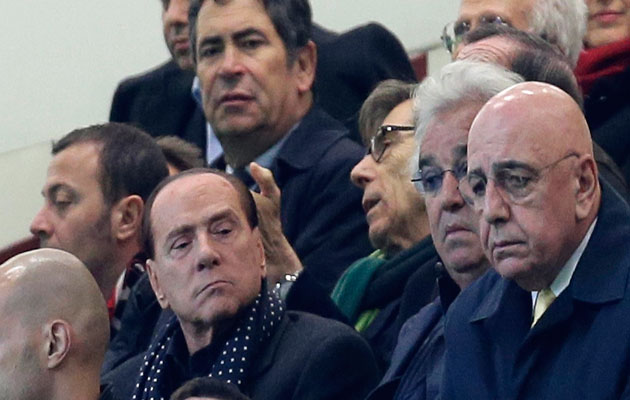 This has been a strange week for Milan, for its fans and indeed for its owner, former Prime Minister Silvio Berlusconi.   On the pitch, nothing has gone right with the club losing 3-1 at home to Genoa in midweek and 3-0 away to Napoli on Sunday night.

Ironically, however, Italian media attention has not been focussed merely on these upsets.   Rather, Milan has been in the news all week because of Mr. Berlusconi’s apparent willingness to sell a signficant (minority) shareholding in the club which he has owned since 1986.

Last Saturday, the media tycoon met in a downtown Milan hotel with Thai broker, Bee Taechaubol.   Many expected that this meeting would mark the definitive passing of the baton with Mr. Berlusconi relinquishing at least a 51% shareholding in the club for approximately €500 million.

Instead, when the two men emerged from what looked like a suspiciously short meeting of just 20 minutes, Mr. Berlusconi told reporters that negotiations were still ongoing and that there was still the possibility that he would hold onto a 51% shareholding.   In other words, he seemed to indicate that he was not selling the club at all but rather, he was merely looking for new, minority investors.

That scenario became all the more intriguing when media reports on Monday of this week indicated that Mr. Taechaubol’s group was not the only consortium interested in buying Milan.   Reports revealed that on Sunday Mr. Berlusconi had also met with a representative of another Far East consortium, led by Hong Kong businessman Richard Lee.

It is hard to know just what “poker” game the wily Mr. Berlusconi is playing at the moment.   What is certain is that he is looking for fresh capital.   Milan closed the year 2014 with €91 million euros of debt, whilst the club owes €250 million plus to various banks.   On top of that, most observers agree that Milan should be prepared to splash out €300 million euro to build themselves their own stadium, on the lines of the ultra successful Juventus Stadium in Turin.

With debts like that and with further spending on the horizon, it is hardly surprising that Mr. Berlusconi is open to a Far East cash injection.   What remains highly debatable, however, is whether any new investor will be tempted to splash out for a minority shareholding.   It could be that Mr. Berlusconi’s current moves and his talk of holding onto a 51% shareholding represent a “bluff” intended to inflate the selling price.

It could also be that Mr. Berlusconi, who has always appeared to be a genuine, lifelong  Milan fan, is deep down utterly reluctant to sell his club and is doing so only under pressure from financial advisors and from his family, in particular daughter Marina Berlusconi, head of the Mondadori publishing house.   What seems obvious enough, though, is that this saga could run and run.