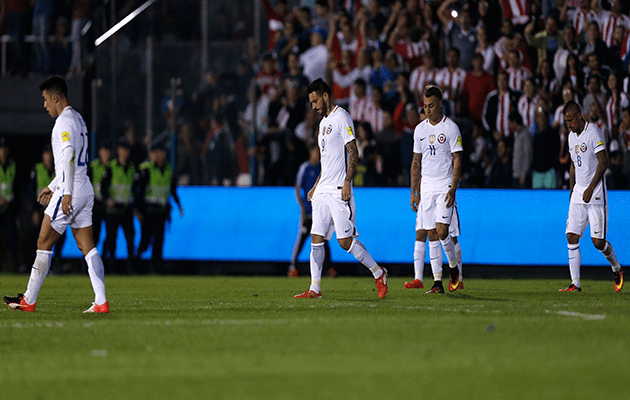 They have finally given Chile a reason to have a trophy cabinet – winning the Copa America on home ground in 2015 and repeating the feat a year later with the Copa Centenario in the USA.  Their performances in South Africa 2010 and Brazil 2014 are Chile’s best ever in a World Cup, with the exception of 1962, which the country hosted.  This has undoubtedly been the best generation in the history of Chilean football, and many of them will be making their farewell from the big stage in Russia 2018 – providing, that is, that Chile qualify.

They went into Thursday’s seventh round lying fourth in the table – the last automatic qualifying slot.  With a play-off coming up against opponents from Oceania, fifth place should also be good enough to book a slot in Russia.  Seventh place, though, will not be good enough – and that is where Chile now find themselves after a 2-1 defeat to Paraguay.

Coach Juan Antonio Pizzi’s men won the Copa Centenaro going through the knock out phase without conceding a single goal.  They kept clean sheets against opponents as dangerous as Mexico, Colombia and Argentina.  But when the World Cup qualification campaign resumed before the ten minute mark in Asuncion they found themselves two goals down.

The controversial aspect here is that the team’s captain and goalkeeper Claudio Bravo had made himself unavailable for these two rounds.  He is still settling in to his new environment after moving Barcelona to Manchester City (incidentally, staging the matches just hours after the transfer window had shut may have affected other players as well.  While he was with his national team Enner Valencia learnt that he would be exchanging London for Liverpool, moving from West Ham to Everton, and the uncertainty may have been a factor in his dismal performance for Ecuador in their 3-0 home defeat to Brazil).

With Bravo missing, in came Christopher Toselli – who was immediately blamed for being beaten by a long shot from Oscar Romero, and was then rooted to his line as Paulo Da Silva headed home the second after a corner.

Toselli looks set to keep his place for Tuesday’s next game, when Chile will field a very depleted defensive unit.  In addition to Bravo, centre back Gonzalo Jara is out injured, and his centre back partner (and captain in the absence of Bravo) Gary Medel was sent off against Paraguay and is suspended.

Chile will hope that this is a match where they can afford to select a reserve defence.  After all, they are at home to Bolivia, who, as usual, have been beaten in all of their away games so far in the campaign.  Indeed, the last time the Bolivians won a World Cup qualifier on the road was all the way back in 1993.

However, the recent appointment of Angel Guillermo Hoyos as Bolivia coach has given them a boost.  In the long term the Argentine, who worked with a young Lionel Messi at Barcelona, has established youth development as a priority.  In the short term he has smoothed over relations that were strained under the previous regime of Julio Cesar Baldivieso.  Key veterans such as centre back Ronald Raldes, attacking midfielder Pablo Escobar and centre forward Marcelo Martins Moreno have been coaxed back from self-imposed exile.  Escobar and Raldes scored the goals on Thursday as Bolivia beat Peru 2-0.  In addition, Hoyos established his pedigree for the job with an eye catching Copa Libertadores campaign with the Bolivar club in 2012.

Until they were demolished by the Santos of Neymar in the second round, his team showed considerable ambition in their away games.  Can Hoyos now bring such an approach to the national team?

The 2018 qualification campaign promises to be so tight that any points dropped at home to opponents like Bolivia could be fatal.  Chile will look to Alexis Sanchez – captain in the absences of Bravo and Medel – to lead them to three badly needed points and keep the team on track for a third consecutive World Cup appearance.