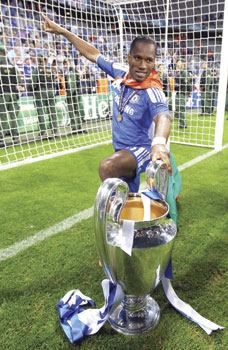 “This lady with the big ears [the Champions League trophy] has for many years burned us, rejected us, caused us to suffer and sometimes made us cry. Why have you avoided us, flirting with us, eluding us? But now we have you.”

These were Didier Drogba’s heartfelt words when, following several near-misses, Chelsea were crowned European champions on a night of high drama in May 2012. And who better to lead the thanksgiving session after their penalty shoot-out victory over hosts Bayern Munich than their Ivorian striker supreme, whose post-match victory speech in the Allianz Arena dressing room was typical of the man: proud, emotional, romantic and mystical.

Without Drogba’s six goals throughout the campaign, his excellent work leading the line, the charisma and unbending will, it’s most unlikely that Chelsea would have unlocked the door to their very own nirvana. So how appropriate that it was Drogba who proved to be the key protagonist in the Final, equalising with a bullet header near the end of normal time, then netting the decisive spot-kick.

Renowned for celebrating big wins with a cigar and a brandy, the 34-year-old would certainly have enjoyed his Havana and cognac in Bavaria.

A mere three months previously he had missed horribly from the spot in Ivory Coast’s loss to Zambia in the Final of the African Nations Cup. However, in the white-hot crucible of the Champions League showpiece  there would be no such slip-ups. Calmly making the long walk from centre circle to penalty spot, he mulled over the advice of Chelsea goalkeeping coach Christophe Lollichon – who had noted that Bayern goalkeeper Manuel Neuer usually dived to his left when facing right-footers – and slotted the ball in the opposite corner.

As hosts and clear favourites, Bayern ultimately had not been able to live with the pressure. Not so Drogba and company, whose courage and discipline may not have set purist hearts a-flutter but still packed a heavyweight punch.

Also on target in Chelsea’s 2-1 FA Cup Final victory over Liverpool, Drogba’s capacity to come good when the chips are down is the stuff of legend. In nine major Finals with Chelsea he has scored no fewer than nine goals, and who could blame Blues fans for voting him the club’s best-ever player?

On the day Chelsea returned to south-west London to parade with their European spoils, a tearful Drogba announced to his team-mates that, after eight years at Stamford Bridge, he was jumping ship. A month later news broke of his two-and-a-half-year deal with Chinese Super League (CSL) side Shanghai Shenhua.

Viewed and treated as a demi-god by Chinese supporters and remunerated as such (his weekly pay packet totals £200,000), Drogba made his debut for Shenhua in July and by the end of the season in November had racked up an impressive eight goals in 11 appearances.

He denies the move to China was essentially motivated by the mountain of cash on offer, insisting that he was particularly excited by the challenge of spreading the football message in the most populous country in the world.

Yet even he would have to admit that his first few months in the CSL were far from plain sailing. The best Shenhua could do was to finish the campaign ninth out of 16 teams, while the club also had to contend with a series of vitriolic shareholding and funding disputes.

Anxious to prepare in the best possible way for the 2013 African Nations Cup, Drogba tried and failed to convince FIFA to grant him special permission to go out on loan outside of the official transfer windows. Chelsea, Liverpool and Juventus were reportedly among those who would have gladly brought him in for a short, sharp burst of that trademark power and magic.

Desired in Europe, venerated in China and worshipped in Africa, Didier Drogba clearly has global appeal; now more so than ever.