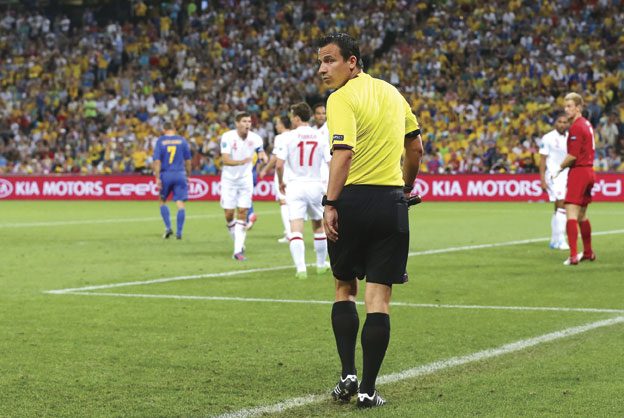 Istvan Vad – or rather Istvan II Vad, to differentiate the Hungarian official from his refereeing father – may seem an unlikely candidate to be one of football’s most influential figures in 2012. But Vad played a crucial role in an event which helped to shape the debate surrounding goal-line technology (GLT).

The 33-year-old, Budapest-born official was part of the mainly Hungarian team, under referee Viktor Kassai, who officiated at the Euro 2012 game between England and Ukraine in Donetsk. As an additional assistant referee (AAR), it was Vad who was closest to the goal when John Terry hooked a Marko Devic effort out from behind the line.

Vad advised Kassai against awarding the Ukrainian goal. England, who had gone ahead through Wayne Rooney early in the second half, held on to their lead and topped the group while tournament co-hosts Ukraine were knocked out.

The controversy placed UEFA president Michel Platini’s scheme for goal-line officials in the spotlight. FIFA president Sepp Blatter, for so long an opponent of goal-line technology, confirmed his conversion by declaring: “GLT is no longer an alternative
but a necessity.”

The International FA Board, meeting in Zurich immediately after the Euros, decided to push ahead with plans for GLT. In December, FIFA began trialling two different GLT systems at the Club World Cup in Japan. Assuming a successful trial, the winning system could be in place for the 2014 World Cup in Brazil, while domestic competitions such as the English Premier League could have the system up and running next season.

The debate on GLT also highlighted the growing division between Blatter and Platini – the man most likely to succeed him in 2015. Platini continues to be opposed to the use of technology in all refereeing decisions, preferring instead to advocate the use of five-man refereeing teams in the Champions League and Europa League.

UEFA has since clarified its position on AARs, with refereeing supremo Pierluigi Collina insisting that Vad was wrongly positioned on the goal-line during the Ukraine-England game. Collina argued that if Vad had been standing behind the goal-line, rather than on it, he would have been better placed to spot that Devic’s shot had crossed the line.

Collina acknowledged Vad’s error as“a human mistake made by a human being”.

It was, said the Italian, “the only one problem we had with this experiment in roughly 1,000 matches”.

Vad has disappeared from the international stage since his moment of infamy in Donetsk. The day after the Ukraine-England match, the team of Hungarian officials was sent home, shunning a pack of cameramen and journalists at Budapest’s Ferihegy Airport and refusing
to answer all questions.

Since then, Kassai has been back officiating at Champions League and World Cup qualifying games, but Vad has been dropped from his travelling team. While Gyorgy Ring and Tamas Bognar (two of the other officials in Kassai’s team at the Ukraine-England game) see action around Europe, Vad regularly referees Hungarian league matches, avoiding the limelight and turning down all requests for interviews.