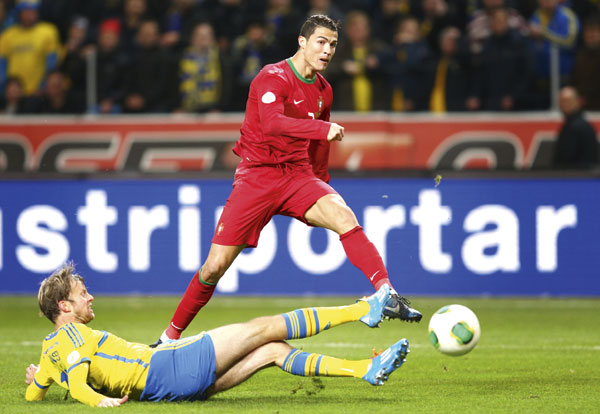 Forty-five thousand Cristiano Ronaldos turned up for Real Madrid’s Champions League game against Galatasaray at the end of November. About the only Cristiano Ronaldo that didn’t was the real one. Not on the pitch, anyway. For once, the Portuguese attacker was not tearing up defences; instead, he was up in the glass-fronted VIP box, recovering from a minor injury as down on the pitch his team-mates beat the Turkish side 4-0.

Not that it stopped Ronaldo being the protagonist. In the 77th minute, the Santiago Bernabeu launched into a chant of “Cristiano Ronaldo, balon de oro”. At the same time, fans lifted masks to their faces. It was a surreal sight, a kind of Being Cristiano Ronaldo. They had been handing the masks out before the game; 45,000 of them. Ronaldo lifted a hand, grateful for their support.

It is unanimous. Real Madrid’s fans might have taken their time but now there are no doubts; they have embraced him wholeheartedly. Their former reticence just looks bizarre. Some are even daring to think the unthinkable: could Ronaldo be the best player that ever played for Real Madrid? No player will ever have the impact on the club that Alfredo Di Stefano did – the man without whom modern Madrid simply does not make sense – but the question hovers.

Certainly, Ronaldo’s statistics make for frightening reading. In fact, it hardly seems worth outlining them because by the time this magazine is on sale his tallies will, inevitably, have changed. This is the man who scored his first 200 Real Madrid goals in just 197 games, who got to 150 quicker than a goal a game and who has just kept on accelerating. He recently scored his 23rd hat-trick for the club.

In the past four league seasons, Ronaldo scored 26, 40, 46 and 34 goals, and he is on course to break those totals this term. He is already the fifth-top league scorer in the club’s history, having overtaken Ferenc Puskas. By the end of the year, he is likely to have gone beyond Hugo Sanchez and possibly Carlos Santillana too. It is impossible to imagine him not smashing every record going.

He is just relentless and the pursuit of perfection means that he never lets up. He has had an extreme cold chamber installed at his home which aids recovery, and coaching staff tell the story of the night when Madrid returned from an away game in the Champions League. When the bus arrived at Valdebebas gone five in the morning, the players picked up their cars and headed home. Ronaldo didn’t; he instead called on the physios and underwent a series of exercises. It is, they say, typical of him.

As Gerard Pique says: “He’s the same [as he always was]. He’s a player I have always admired because he’s a worker who always wants more and more and more. He is a machine, he’s so ambitious. He’s naturally very strong but never, ever stops fighting to improve.”

Right now, those who say he is the best are growing in numbers. The debate rages, as ever. Not just about who is the best player in the world but also – if indeed it is a different question – who has had the best 2013?

There are factors that go against Ronaldo. Last season he did not win anything. Madrid were knocked out in the Champions League semi-final, finished 15 points behind Barcelona and lost the Spanish Cup Final to Atletico Madrid, a game in which Ronaldo was sent off. Meanwhile, Portugal did not qualify automatically for the World Cup.

Yet even the latter situation ended up going in Ronaldo’s favour. An obligation became an opportunity and Ronaldo took it with both hands. Rarely has an individual so decisively marked such an important game as when he scored a brilliant hat-trick against Sweden in the World Cup play-off. It was billed as Zlatan versus Cristiano and there was only one winner, even though Ibrahimovic scored twice. Once again, Ronaldo had taken the chance to make a point.

One man who said that he preferred Lionel Messi was the FIFA president Sepp Blatter in his now infamous performance at Oxford University when, like a drunk grandad at a wedding, he did a pretty lamentable “impression” of Ronaldo, lurching up like some kind of robotic dinosaur. “Ronaldo is like a military commander,” he said.

Ronaldo’s response was furious at first. Then it was funny. He released a statement that said Blatter’s display had shown the “respect” that FIFA had for him and said that he now “understood” certain things – presumably the fact that Messi had won four FIFA World Player awards in a row. Then he scored a hat-trick in his very next game: he celebrated the first by standing to attention and saluting, commander style.

In Madrid, wild and ridiculous conspiracy theories abounded, and accusations of FIFA bias and manipulation flew. But in the wake of the Sweden defeat, voting for the FIFA Ballon d’Or was reopened (with the winner to be announced in January). So much for bias. Suddenly, Ronaldo appeared to be the favourite again. Franck Ribery’s chances seemed diminished. “I don’t need big gestures to know I’m the best,” Ribery said bitterly after the Ronaldo masks were brought out at the Bernabeu.

But without the goals, without the Portuguese player’s performances, the gesture would have been a hollow one. It was not just that mind-blowing display against Sweden that makes Ronaldo a strong case. This has been an extraordinary year for him, something that is reflected in the 28-year-old coming out on top in our vote.

Ronaldo appears unstoppable. He also appears more contented than ever. It took a while for Madrid’s fans to warm to him – after all it is not much more than a year since he failed to celebrate a goal against Granada and afterwards admitted he was “sad”.

His relationship with the president Florentino Perez was strained and the player warned him that he was not sure he wanted to continue. Now, he is going to the World Cup and is now the best paid player on the planet, having renewed his contract at Madrid.

A future without him seems unthinkable: he costs Madrid over €40million a year in wages but no one considers it anything other than money well spent. Ronaldo is World Soccer’s Player of the Year. Real Madrid’s fans love him so much that they pulled on 45,000 masks to show it.