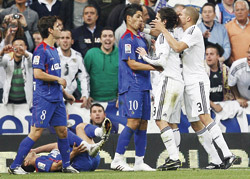 Real Madrid president Vicente Boluda misjudged the mood of the country when he disputed Pepe’s 10-game ban for a shocking attack on an opponent.

When Vicent Boluda called it “savage”, most people would have agreed with him but for one rather important thing: he was not talking about what Pepe did.

Instead, Real Madrid’s president was referring to the punishment handed out for what Pepe did: a 10-match ban – the sixth biggest in Spanish football history – and two fines. The centre-back would have to pay £6,460; his club £807. The decision had, Spain’s competition committee announced, been reached unanimously. Few could really argue about it. Except Boluda.

It had also been reached surprisingly quickly as the events had taken place just three days earlier, on Tuesday, April 21. It was round 32 of the La Liga season and it all started in the 88th minute of Real Madrid’s clash with Getafe at the Santiago Bernabeu. The score was 2-2 in a match that, like every match Madrid had played for the past four months, they had to win to keep their chances of retaining their league title alive. Perhaps the pressure of permanently walking a tightrope finally told.

Javier Casquero was played into the Madrid penalty area. Clean through, he steadied himself for a shot or, some suggested, slowed to invite the challenge. Sprinting up behind him, Pepe pushed him in the back and on to the floor. Referee Delgado Ferreiro had no hesitation in awarding a penalty. There could be no argument.

With Casquero still on the floor, before anyone had even had time to react, Pepe kicked him twice; raking his studs down his back, narrowly missing his head, then treading on his ankle. There was no question that it was deliberate.

As players from both sides came across and tried to pull him away, Pepe punched Juan Albin in the face. Albin was still standing; he did not seek to profit from the attack. The red card came out but Pepe had to be forced from the field by team-mate Iker Casillas. As he departed, the defender turned to the fourth official and shouted: “You’re all sons of bitches.”

There were two minutes remaining and Getafe had a penalty that, with leaders Barcelona hammering Sevilla 4-0 the following day, would have left Madrid nine points behind with just 18 still up for grabs. They would have to face the title run-in without their best centre-back too, as everyone immediately knew that there would be a significant ban. After a brave battle, a run of 15 wins and a solitary draw in 16 matches, Madrid’s luck had finally run out. It looked all over.

Only it wasn’t. Miraculously, five days later, Madrid found themselves just four points behind – they won 4-2 at Sevilla while Barca were held 2-2 by Valencia – with the clasico up next, and with it the chance to close the gap to a solitary point.

What had happened? Casquero, having recovered enough to want to take the penalty himself, decided to despatch it Panenka-style – but weakly clipped it straight into Casillas’ arms.

Desperate to make up for the miss, Getafe poured forward – and were caught on the break as Gonzalo Higuain hammered in an utterly improbable winner. The stadium erupted and Madrid’s players piled in over the Argentinian striker, forming a wriggling mass of celebrating bodies.

As they did so, a figure dashed over and dived on top. It was Pepe. He should not even have been anywhere near the pitch but there he was wearing a colossal grin.

The grin did not last long as the realisation of what he had done struck the 26-year-old Brazil-born Portugal defender. After the game, he appeared near to tears as he apologised and left the stadium head bowed.

“I would like to say sorry not just to Getafe’s players – who I will personally call – but to all football fans,” he said. The following day, he did not show up for voluntary training at Madrid’s Valdebebas HQ. Instead he locked himself away at home.

No excuses
To his credit, Pepe made no such excuses. “These are the worst days of my life,” he said two days later. “I have watched it again and I don’t recognise myself. I went absolutely mad.

“I have been crying over this. I am devastated about what happened and what I am going through now is the worst punishment anyone could ever have. I am certain that I will never, ever do anything like this again.

“Right now, I am not sure I have the will to return to playing football.”

The attack had, the Madrid media maintained, been completely out of character. The Barcelona press countered that it had been an act of wild savagery. Good guy or bad? It depended entirely on which paper you read. Conclusions were, yet again, drawn not on the basis of what was done but who had done it. The Catalan media were not so much seeking to throw the book at Pepe as an entire library, while in Madrid they pleaded for clemency. Here was the case of a man being condemned, criminalised and crucified in one city, yet forgiven and even fawned over in another.

The Catalan newspaper Sport ran a cartoon of him booting Leo Messi’s head off with a huge smile on his face under the slogan: “Will we have to see this before he gets a ban?”
There had not even been a decision yet and already they were railing at some perceived injustice and portraying Pepe as anything but repentant, when his reaction had
been exactly that.

Cautiously calculated ban
Ten games might seem a big ban for what was essentially a (long) moment’s madness; the kind of ban that as the season reached its climax could cost his side the title. But it
also represented a small, cautiously calculated one – one that even the openly pro-Madrid newspaper AS considered just. Goalkeeper Casillas confirmed his sensible, honest reputation with the simple response: “You cannot do what Pepe did.” As for Pepe, he accepted his fate in silence.

Pepe had, the committee’s president Alfredo Florez explained, been handed the “minimum possible” punishment. Each attack could have earned him as many as 12 matches rather than four but no one had been injured by his actions.

Yet still Boluda, president of a club that has insisted time and again upon its senorio, or gentlemanliness, whined: “The ban is savage.”

Madrid did not fine Pepe, nor did they offer any public apology or condemnation. And when one of their junior teams won a match the next weekend, they dedicated it to the man who had gone from perpetrator to victim in the blink of an eye.