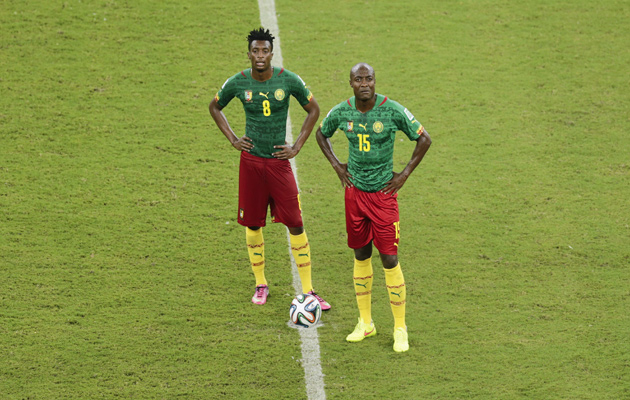 It looks like being another disappointing World Cup for Africa. One win, one draw and three defeats in their opening matches was worse than four years ago when, in their own continent, African teams managed one win, two draws and three defeats and only Ghana reached the knockout stage.

This time, only Ivory Coast look capable making the last 16 while Cameroon are already out of the competition. Ghana and Algeria had their moments against USA and Belgium respectively before succumbing to defeats, while Nigeria were poor against a very defensive Iran side.

Stereotypes are hard to avoid when discussing African football. Cameroon managed to tick all the boxes of an African team in implosion, from the pre-tournament rows over bonuses to Alex Song’s ridiculous sending-off, and the on-pitch fisticuffs between Benoit Assou-Ekotto and Benjamin Moukandjo.

It’s difficult to generalise about national and continental playing styles, especially in an era when Germany play like Spain, and Spain play with a Brazilian striker (although England still play like England). But there is an element of the African style which may not be suited to success in a World Cup.

African players have always liked to dribble past defenders rather than pass their way through a defence. Such individual play may be admired by African fans but it has often led to a stop-start style of play. The tempo of the game gets broken up when the dribbler gets tackled and the opposition starts their own attack with a slow build-up.

International football is increasingly played on the counter-attack. Transition is the buzzword that coaches like to use. The “transition” between defence and attack often only lasts a few seconds while teams recover their defensive organisation, but it is in this period that many of the crucial goals are scored at international level.

Another tactical feature of this World Cup has been the heavy pressing employed by teams such as Chile and Germany. Although, again, it’s hard to generalise about an African style, but the African teams have not pressed as hard as the European and South American teams.

Ivory Coast look like being the most successful African team at this World Cup. Their coach Sabri Lamouchi, is steeped in French football and spent the best years of his playing career in Italy; he has Ivory Coast playing a more European style. Similarly, Algeria, with a new generation of players raised in France, look like improving on their performance four years ago. But, overall, the outlook is not bright for African football.