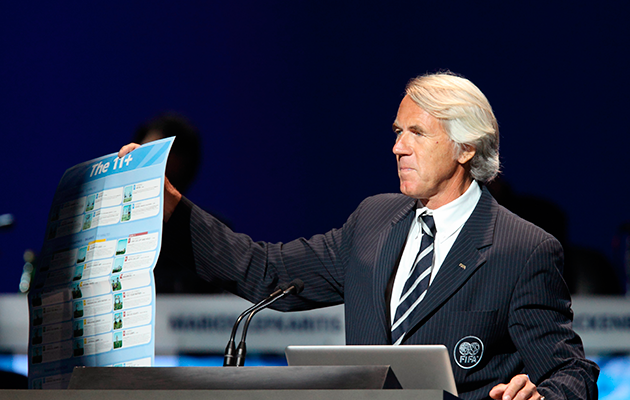 Jiri Dvorak, long-time head of world football’s medical services, has become the latest member of the ‘old guard’ to part company with FIFA.

Dvorak, high-profile and highly-respected member of the sports medicine sphere, came on board initially during the sensational Diego Maradona dope-test incident at the 1994 World Cup in the United States.

In addition to a range of other appointments, Dvorak rose rapidly to become FIFA’s chief medical officer and head the FIFA Medical Assessment and Research Centre (F-MARC) which goes far beyond the research and investment programmes of any other international sports federation.

Dvorak will be 68 in three weeks’ time and his exit follows a major change of senior personnel at FIFA since the end of the post-Sepp-Blatter hiatus in February when Gianni Infantino was voted in as new president.

Over the years he has worked closely with Michel D’Hooghe, the veteran Belgian member of the FIFA Council and UEFA executive committee. It is thought that D’Hooghe, who chairs the FIFA medical committee, is himself considering stepping down at the next elections in 2019.

FIFA has said that the appointment of a new medical chief “will be communicated in due course.”

In tribute to Dvorak’s work, D’Hooghe praised his “strong commitment towards the progress of our organisation in the field of health and medicine.”

D’Hooghe added: “The projects he led, such as the ‘FIFA 11 for Health’ and ‘FIFA 11+’, did not only contribute to the development of medical awareness but also raised the level of requirements and the quality of medical teams among member associations.

“The commitment and skill of Prof. Dvorak brought an important scientific dimension to FIFA’s medical work. FIFA will build upon his work to continue reinforcing its strategy in this field, particularly in the fight against doping.”

One significant feature of Dvorak’s work within football was in encouraging convergence between the sports medicine ‘brigade’ and the administrative arms of national associations.

This proved relevant in debating the medical aspects of changes to the laws of the game and tournament organisation with particular reference to in- and out-of-competition dope testing, concussion and player age analysis for youth tournaments.

Dvorak, born on November 22, 1948, in what was then Czechoslovakia, left in the wake of the Soviet invasion following the ‘Prague Spring’ to continue his studies in exile in Zurich. He graduated in medical studies eight years later, specialising in neurology, and was appointed a professor at the University of Zurich in 1995.

By then Dvorak had already undertaken work in the United States as a visiting professor at Yale, taken up a chair at the Schultheiss Clinic in Zurich and become involved with FIFA. In the past decade Dvorak has also been an editor for the American Journal of Sports Medicine and British Journal of Sports Medicine as well as a member of the foundation board of the World Anti-Doping Agency.

Explaining his departure from FIFA, he said: “FIFA has been a pioneer in sport medicine and I am proud to have been leading this process for more than two decades.

“We moved from the concept of medicine for football to football for health, putting the health of players in the centre of the football community and using the power of football to promote health awareness in society.

“Prevention was central to all of the projects which I initiated and performed with my medical colleagues from all around the world. Particularly the FIFA 11+ which aims to prevent injuries.

“With this programme, we provided the world with scientific evidence that injuries can be prevented in women, men and young children by up to 50pc if carried out properly.”