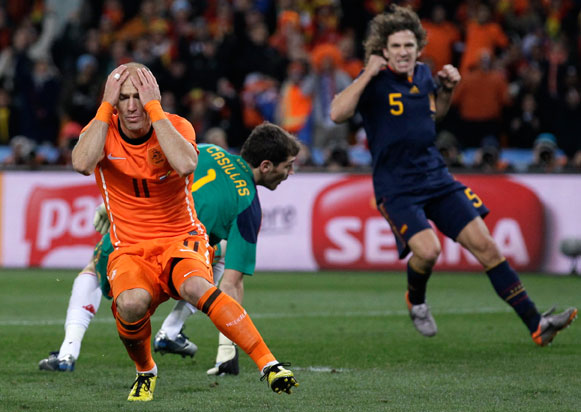 “You need the luck of the champions in order to win the World Cup, just like Spain had in South Africa. Spain were the best team at the 2010 World Cup, but they were fortunate that Robben missed two huge chances in the final.”

The Dutchman found himself one-on-one with Iker Casillas in the second half but he squandered the opportunity as Spain ran out winners.

Reflecting on that day, Robben has always been keener to focus on the failure of referee, Howard Webb, to send off Spain skipper, Carles Puyol, for his blatant shirt pull as the Dutch forward raced towards Casillas.

“He has to send [Puyol] off and give a free-kick,” Robben said at the time.

“For me, it is very clear – after such a game when you sit in the dressing room there is only talking about the referee, and I think that’s a bad point.

“If you play a World Cup final, you need a world-class referee.

“I don’t know if that was a world-class performance from the referee.”

Robben has a valid point about Webb’s performance in Johannesburg. World class it was not. Although, had the English referee applied the rules of the game correctly that day, the match would have already been abandoned by the time Robben bore down on goal, courtesy of a thuggish Holland being reduced to six men.

Looking ahead to the World Cup this summer, Messi also claimed that his Barcelona teammates, Xavi and Andres Iniesta, are rooting for Argentina.

“Xavi and Iniesta are my friends and they told me that they want me to win the World Cup,” he added.

“Everybody in Argentina will go absolutely crazy if we win the World Cup.

“I really hope Alejandro Sabella will continue as national team coach after the tournament.”