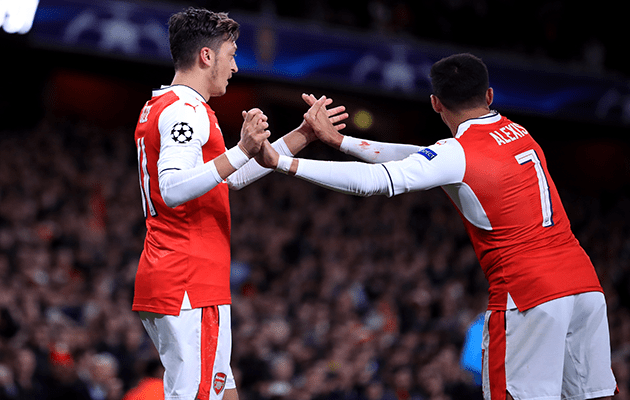 Arsène Wenger has told Mesut Ozil and Alexis Sanchez they will not leave Arsenal before their contracts expire in 18 months time, even if it means the pair leaving the club on free transfers.

Reports this week claimed both players were looking for pay rises to give them parity with the best-paid players in the Premier League.

Asked if he would consider selling Özil and Sánchez before they ran down their contracts, Wenger said: “I’m not the only one who can decide that. A contract is negotiations in this case between two parties.

“On my side, the best position is to achieve it earlier. These players will stay here for at least 18 months. I cannot repeat always the same things.

“I think at some stage you have to accept that negotiations are private and secret, and we do not always have to come out every day to explain what we do in football negotiations. We are professional people, we work until the last day of our contracts with full commitment.

“These players have 18 months on their contracts and, no matter what happens, they will stay for 18 months. Hopefully they’ll stay for longer than that.”

Wenger did admit that he could offer no guarantees to Arsenal fans that the duo would stay.

“We’ll try to extend their contracts but I cannot make that the subject in every press conference because it’s a normal part of every renewal when you renegotiate,” he said. “The less you talk about it, the better it is.”

Sanchez has been linked with a move to China, amid claims that he has been offered £400,000 a week (almost quadruple his current salary of £115,000) – but Wenger suggested that the lure of money was outweighed by the players’ desire to play in England.

“I believe it, yes, why not. But why should you go to China when you’re playing in England today?” he said. “We live in a world where great players like Alexis and Özil earn a lot of money and they have the privilege of choosing where they really want to play.”

Both players are expected to start in Saturday’s Premier League match against Stoke City, with Arsenal looking to move to top spot for at least 24 hours.