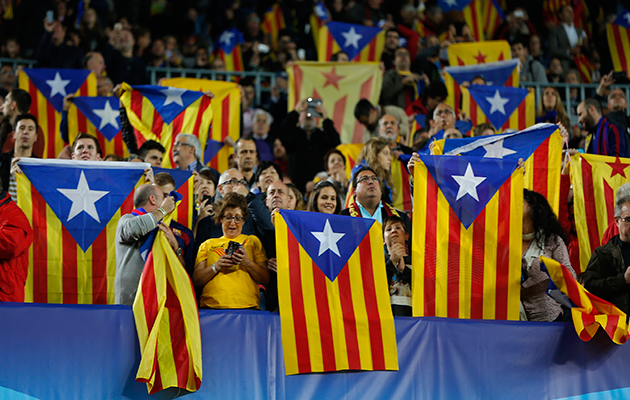 Barcelona claim the Spanish government’s ban on supporters displaying Catalonia’s separatist flags during their Spanish Cup final on Sunday represents “an attack on freedom of expression.”

The recently crowned league champions and reigning cup holders released a statement expressing its “total and complete disagreement” with the announcement, four days ahead of the Kings Cup final against Sevilla at the Atletico Madrid’s Vicente Calderon.

Barcelona, who have been fined before for their supporters displaying ‘political banners’ say the decision is an attack “on the fundamental right of each and every individual to express their ideas and opinions freely and without censorship.”

Officials said the ban of the politically-controversial ‘Estelada‘ flags was approved as part of security measures being implemented for the final.

However, Barcelona have asked for the authorities to use “common sense” and demanded the government “respect the honour of the institutions involved and to avoid causing any uncomfortable situations.”

Barcelona were fined 30,000 euros (£22,000) in 2015 for breaching article 16 of UEFA’s disciplinary regulations – order and security at matches – after fans displayed pro-Catalan independence flags during their Champions League final with Juventus.

The club, which for many years was regarded as a potent symbol of opposition to the Franco regime which ruled Spain until 1976, has, in recent years, become synonymous with the fight for Catalan independence.