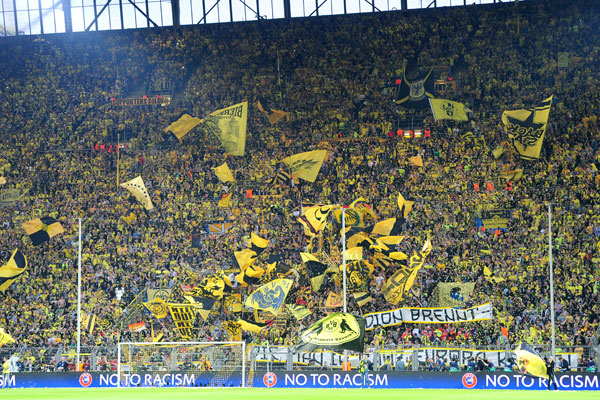 Despite watching their side reach the Champions League quarter-finals for the second season running, it would appear that not all Borussia Dortmund fans are happy with the current state of their team.

Players complained about jeering fans after Dortmund lost 2-1 to Zenit St Petersburg on Wednesday, but still went through 5-4 on aggregate.

For Jurgen Klopp’s team this was a sixth home defeat in all competitions this season, and came on the back of a 2-1 defeat to Borussia Moenchengladbach in the Bundesliga.

Dortmund are patently not the same side who won back-to-back Bundesliga titles and who reached last year’s Champions League final, and tempers are beginning to fray.

“Home games should normally be a positive experience and not give you the feeling you committed a crime,” captain Sebastian Kehl said.

“The team doesn’t deserve this.”

Kevin Grosskreutz was another to criticise a set of supporters regarded by some as the benchmark of modern fandom.

“These groans when you lose the ball are not on. Anyone who can’t deal with the success is at the wrong place here,” Grosskreutz said.

There’s just no pleasing some people.

Coach Klopp said that the result was the only thing that mattered and reminded critics that last year his side did not enjoy the smoothest of runs to the final. In particular he noted their thrilling quarter-final win over Malaga which came courtesy of these two goals in jury-time.