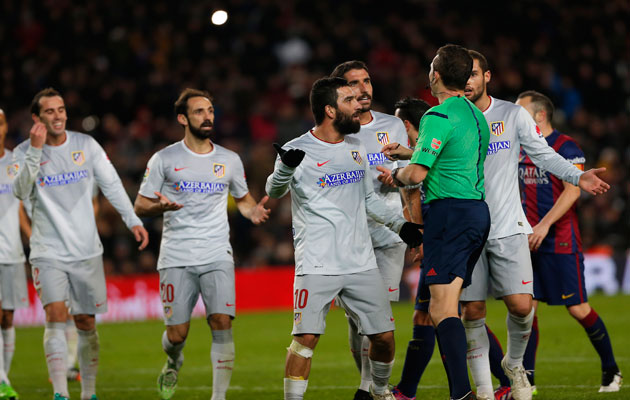 The Brazilian Football Confederation (CBF) has vowed to clamp down on dissenting players, by encouraging referees to punish the offenders.

In Brazil, as elsewhere, the sight of players contesting refereeing decisions is commonplace. But, rather than turn a blind eye to the problem, the CBF has instructed match officials to award cards to the culprits.

It has resulted in a huge increase in yellow cards and, somewhat inevitably, an avalanche of criticism from players and coaches who are struggling to come to terms with the new zero tolerance policy.

“I’m afraid to even greet the referee because I may get a card,” Sao Paulo midfielder Michel Bastos has complained. “It’s complicated when you can’t even talk to the referees. There’s no more communication on the field. This is beyond reasonable.”

More than 100 yellow cards have been issued for dissent in the first eight rounds of the Brazilian league. In the third round alone, 20 cards were awarded for dissent, an average of two per game.

The CBF says the new approach was needed because of “recurring complaints by individuals and groups of players against the decisions made by the referees during and after games.”

“Football cannot be the victim of weak referees or undisciplined players and coaches, whose actions ignite fans in the stands,” said Sergio Correa, president of the confederation’s refereeing commission. “The undisciplined behavior of these idols allows youngsters to build disrespectful habits toward authorities in general.”

Officals who don’t follow the recommendations run the risk of being demoted from the senior leagues.

Players are particulary unhappy because there have been ocasions when they are getting booked just for approaching the referee to discuss a decision.

“It’s just too much,” Santos defender David Braz says. “We have to be able to interact with the referee on the field. Football is not like that.”

Coaches are also unhappy with the new approach.

Sao Paulo manager Juan Carlos Osorio says he was surprised to be sent off after trying to talk to a referee at half-time.

“I didn’t know that referees were untouchable in Brazil,” the Colombian coach says. “I’ve worked in the United States and England and it wasn’t like that. Everywhere in the world you are allowed to talk to each other. I thought it would be the same here in Brazil.”

Osorio claims he merely questioned the referee about a yellow card and never insulted him.

In the match report, referee Anderson Daronco said Osorio pointed his finger at him, said the yellow card was “unfair” and a “mistake.”

In a bid to find common ground between officials and players seven clubs agreed to attend a lecture being offered by the confederation to explain the new recommendations.

Not everybody is criticizing the changes, though, with some conceding that the only way to impove player conduct is by adopting such a strict disciplinary regime.

“They are doing the right thing,” Atletico Mineiro coach Levir Culpi told ESPN Brasil. “Everybody feels like they are being hurt by the referee, nobody likes them. So it’s important to try to protect them a little bit more. It’s boring to see a bunch of players storming the referee to complain, it’s disrespectful.

“The only solution to educate these players is to be rigorous,” he adds, “because it’s a football culture that exists for many generations here.”