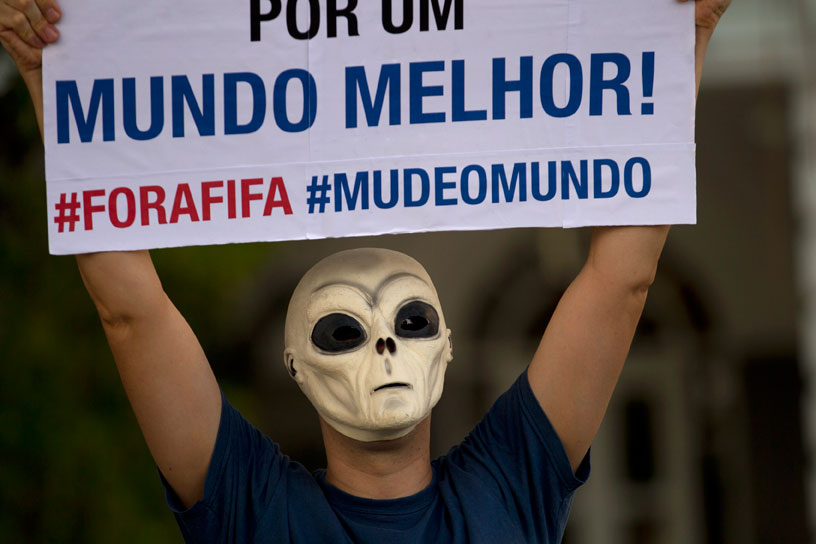 As if the organisers of this summer’s World Cup don’t not have enough to contend with, there are reports that the tournament is to be targeted by hackers, unhappy at the money being spent to stage football’s showpiece event

The hackers are threatening to disrupt the World Cup with attacks ranging from crashing websites to data theft.

According to a Reuters report, Brazil is a country with “rampant online crime, a challenging telecommunications infrastructure and little experience with cyber attacks, authorities are rushing to protect government websites and those of FIFA.”

The hackers are continuing the waves of protest that saw million take to the streets of Brazil last June, calling for better public services, greater transparency, and a crackdown on corruption.

Now, hackers say they will do their bit to destabilise the tournament.

“We are already making plans,” said an alleged hacker who goes by the name of Eduarda Dioratto. “I don’t think there is much they can do to stop us.”

Well, given that they have been unable to do anything else right, the chances of the World Cup organisers preventing a sophisticated cyber attack must be right up there with England winning the tournament via a penalty shootout.

Reuters spoke to Dioratto and other members of the international hacker network known as Anonymous. Handily, and notwithstanding the supposedly covert nature of their operations, the cunning cyber criminals were prepared to reveal their intentions to one of the world’s biggest news organisations. This is the thing to remember about shadowy organisations comprising  spotty faced teenagers with low self esteem – they want to get noticed!.

“The attacks will be directed against official websites and those of companies sponsoring the Cup,” a hacker known as Che Commodore said.

The combination of an ailing Brazil’s telecommunications infrastructure and one of the world’s most sophisticated online criminal communities, means that there could be a genuine threat to the smooth running of this summer’s finals.

“It’s not a question of whether the Cup will be targeted, but when,” said William Beer, a cybersecurity expert with the consultancy firm Alvarez & Marsal. “So resilience and response become extremely important.”

Brazil says it is ready, or as ready as it can be – that is, not ready at all.

“It would be reckless for any nation to say it’s 100 percent prepared for a threat,” said General José Carlos dos Santos, who heads the futuristic sounding cyber command for Brazil’s army. “But Brazil is prepared to respond to the most likely cyber threats.”

A FIFA spokesperson declined to comment on online security. Presumably, they were far too busy shredding thousands of potentially incriminating documents they fear may fall into the hard drives of Brazil’s tenacious hackers.

And despite the government’s preparations, the hackers say they are familiar with, and not terribly impressed by Brazil’s response to the threat.

“It’s nothing out of this world”, said an activist called Bile Day. “Security remains very low.”

As, I’m sure, does the threat to the integrity of the World Cup.

To read the full extent of the purported cyber threat to Brazil, go here.