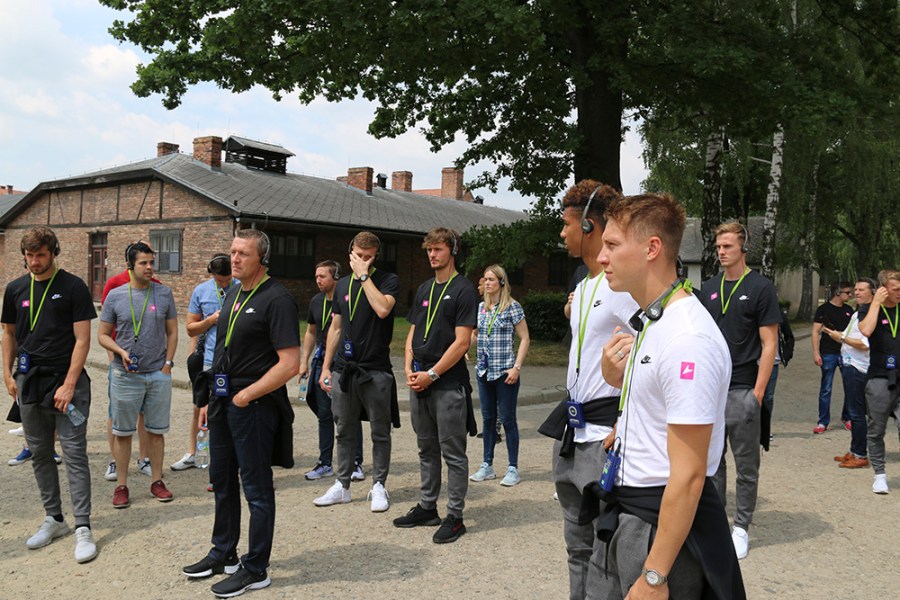 Last week a number of the England under-21 team competing in Poland impressively equally impressively made the journey to the former death camp at Auschwitz. What they could not have known is that that the three fixture of their qualifying group at Kielce were played in a town notorious for a brutal massacre. Ironically, the victims were refugees who had survived the death camps, only to be slaughtered when they found their way back to Kielce. That was soon after the war in Europe ended in 1945.

From a purely football perspective, the performance of the England under-21s was heartening to a degree and coming hot on the heels of the splendid achievement of the under-20s in winning the world title in South Korea, not to mention the concurrent success of the second string under-20s in Toulon, suggested a very bright future for England’s football, whatever the dour and dire performances of the senior team against Scotland and France.

I was particularly pleased to note a dazzling performance on the wing by Demarai Gray, whom I had admired since watching him play at Craven Cottage for Birmingham City against Fulham. Since then, he has been transferred to Leicester City where I am sure he will continue to flourish. He has the pace, the confidence and the skill. Qualities he could surely bring to a first England team which has stuttered so sadly of late.

It is good to see Chelsea at last selling off some of their gifted young stars who regularly win the national youth title but then languish below the first team. Chelsea were not pleased when one of their brightest youngsters, Dominic Solanke, having materially helped the victory in South Korea, elected to jump ship and join Liverpool.

Now Chelsea have decided to sell Bertrand Traore to Lyon for a whopping £16million, with a clause which guarantees them 15 per cent of any profit if the French club sells him. While similar clauses will be inserted into the deal when Nathan Ake, the accomplished young defender, joins Bournemouth for £20million, having done so well while on loan to them last season.

That still leaves a bunch of gifted youngsters who remain at Stamford Bridge. All credit to Chelsea for their scouting expertise and for the excellent training they give their youngsters when they have signed them, but for the most part these youngsters would be much better off at other clubs where first-team football awaited them. Even the towering midfielder Nathaniel Chalobah would surely be better off elsewhere, having been given a mere handful of opportunities last season in the top team. As we know, Chelsea have had no fewer than 38 players out on loan. An alarming imbalance.

As if we didn’t know. The German newspaper BILD has published damning revelations from a report by Michael Garcia, all of 430 pages long, which gives devastating chapter and verse on how Russia and Qatar bought the World Cup. To which I suppose both guilty countries could respond, what about Germany, or South Africa?

It is now alleged that Qatar paid £1.6million to the 10-year-old daughter of a FIFA official. I don’t doubt it for a moment.

Michael Garcia you may remember resigned as the ethics investigator when FIFA published what he termed an erroneous version of his report. It claimed that Qatar “served to undermine the integrity of the bidding process”.

The finger is now pointing at Russian football over the doping of their international players which of course would be of a piece with their mass doping of athletes which has brought blanket bans. No doubt the Russians did bribe their way to staging the World Cup – as indeed did the South Africans and Germans. But at least they are a well established and relevant football country, where Qatar have no logical claim at all, either in terms of football status – rock bottom – or of climate; obliging shameless FIFA officials to switch the World Cup dates to the middle of the European winter season.

Sepp Blatter may have gone, but you might say the malady lingers on.

All quiet on the heading front. Nothing has been heard for some weeks about the ominously established connection between heading and dementia. Deadlock, you might say.

The case against heading has surely been well proved as one former star after another falls victim to the scourge. But as I have said before, the usual, inevitable and predictably long drawn out investigation process will tell us nothing that we do not know already.

In all too many cases, though certainly not all, heading leads to dementia. But how to ban so essential a part of football? Can it be done? And how, short of a massively expensive programme, could it be found out which players were subject to dementia and which not?

That great amateur England centre-forward of the early 20th century, G O Smith, never headed the ball and once asserted that when a team began to do that, then there was something wrong. But how would he fare today?