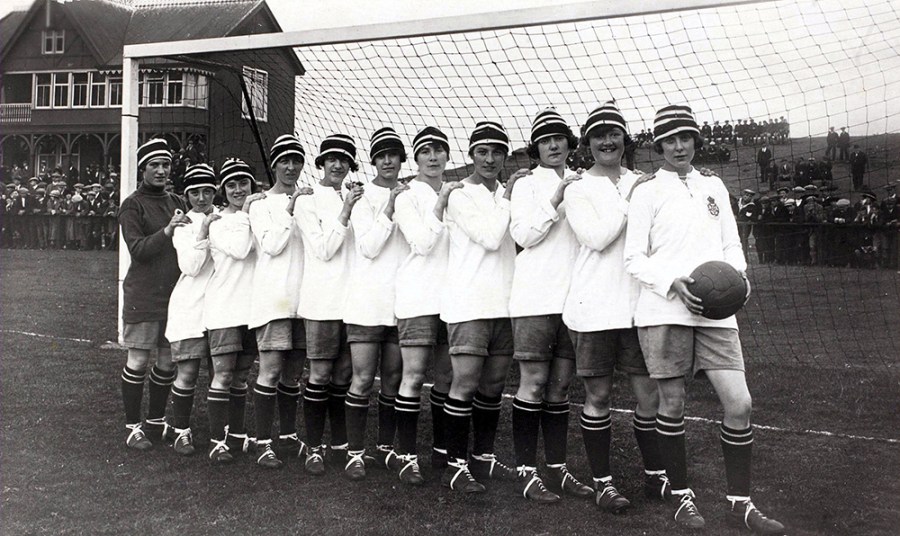 The ubiquitous Clare Balding, struggling off last year’s Wimbledon disaster, recently presented a most intriguing piece about the triumphs and ultimate sad fate of the Dick Kerr’s Ladies team. Formed during the Great War at a Preston munitions factory, enrolling from nearby a left winger whose pulverising shot once broke the arm of a male keeper foolish enough to challenge her, and also once broke a crossbar, the team might be said to have reached its apogee when 53,000 spectators came to watch it play at Everton’s Goodison Park, with an estimated 10,000 others locked out.

Alas, in 1921, the Football Association abysmally decided to ban women’s football from all its clubs and that was effectively the end of Dick Kerr’s days of glory. Why the relentless ban? It was suggested in the programme that pressure had come on the FA from the government who feared the effect of such popular women’s soccer on the inflammable social conditions of the time. It was known that women’s football has given money to the striking coal miners.

I prefer to believe that it was a case of sheer misogyny, suggested by the insistence of the FA that soccer was not physically suited to the female physique. Personally I have never been an enthusiast for women’s football, having been wearyingly bored by the two women’s internationals, one even at Wembley, that I was assigned to cover.

But fair’s fair. If a women’s game should draw such a huge crowd at Everton, what cogent argument could be put against it continuing to operate on League grounds?

What does fascinate me is the sheer size of that 53,000 crowd. It is unthinkable that any women’s game, if it were to be played there today, would be anything remotely matching such an attendance. Yet is the level of women’s football which has spread across the world any lower than it was then?

Were Dick Kerr’s Ladies something of a freak phenomenon, never to be repeated? There are clips to be seen of that game, but they are hardly sufficient evidence. If only a few survivors of that crowd were still alive, perhaps they might have told us.

Thanks to the marvellous Loretta Lynch, the US Attorney General, the late Chuck Blazer in May 2015 was, you might say, at long last indecently exposed. Note pray that it wasn’t by FIFA itself, the body which had allowed conniving Joao Havelange to be its thieving President from 1974 till 1998. The charges against Blazer, who weighed a grossly monumental 30 stones and who couldn’t even fit into his own car, were such that to save his greedy self, he turned state’s evidence in 2011; by which time he had as its new CONCACAF headquarters, Trump Tower in convenient New York; he himself acquiring an apartment on the 49th floor, with a separate apartment for his cats.

FIFA of course was quite happy to let him get away with it and, to his credit, he did do some good for American soccer, not least in their acquisition of the 1994 World Cup. Needless to say he worked hand in glove with that appalling cheat Jack Warner, whom he helped to become the CONCACAF president; and whose immediate future after being found bang to rights in the US investigation seems strangely obscure.

Blazer wheedled himself out of a potential 75-year jail sentence. Yet in May 2011, he set up an investigation which included Jack Warner; so assiduously courted by the England bidding committee before the assigning of the 2018 World Cup.

What a pity that a fellow American, Sunil Gulati, who teaches at Columbia University and who has an impeccable record, cannot be brought into the FIFA hierarchy. Which, under the ineffable Infantino, has already stuck us with a bloated World Cup to come.

Gary Lineker has come under heavy fire with the announcement of his huge £1.8million BBC salary and has not made matters any easier by his flippant response to the news. But he surely has a point when emphasising that Chris Evans, who presided over a hopelessly inept Top Gear programme, is paid substantially more. Why? At least Gary does a sound, fluent professional job with a popular programme. I’d love to know how the Beeb justified Evans’ excessive reward.