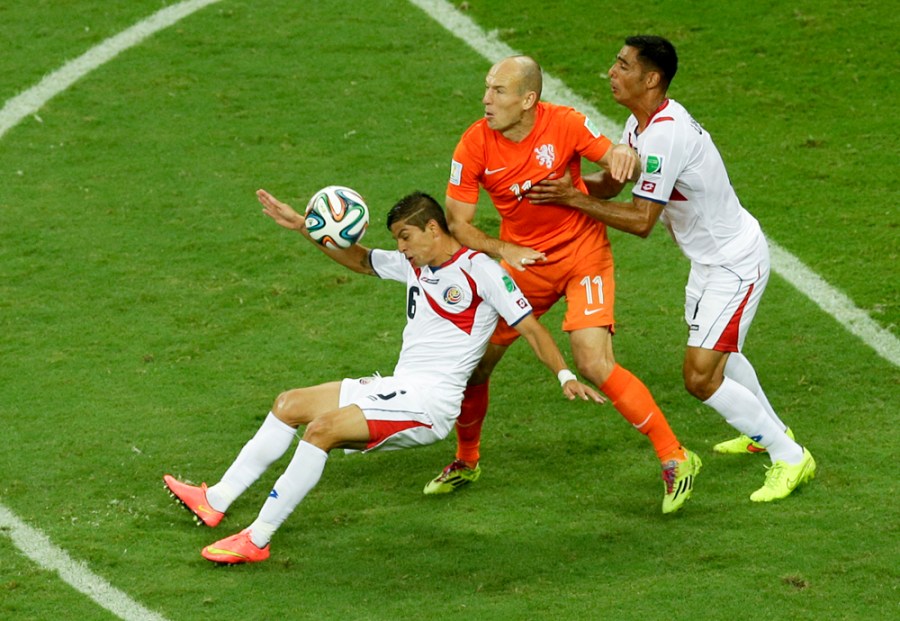 If Holland went out of the World Cup with a whimper, the remarkable Arjen Robben surely went out with a bang. Both Dutch goals against Sweden, the first a somewhat unconvincing penalty, the second one of those glorious left footers, crowned his departure at 33 from international football.

He will however, continue to play for Bayern Munich, cutting in from the right wing to shoot with that extraordinary left foot. To look at him, long legged, bald and lean, you would never take him for a footballer, let alone the remarkable figure he has cut for so long. A worthy successor to those Dutch giants of the past such as Johan Cruyff and Neeskens.

Taking the match ball and his children with him, Robben at the end set out on a personal and well deserved lap of honour. “It is a good time to pass the torch to the next generation,” he generously said, but where is the next generation? Something in recent years has gone badly wrong with Dutch football, which once in those halcyon days of total football, inspired the game as did the West Germans.

Dutch coaches these days tend alas to fall by the wayside; as in the sad case of Frank De Boer who, kicked out in no time at all by Inter, lasted only a few games at Crystal Palace, where his initial tactics were a failure, but things did seem to have changed for much the better at Burnley, where Palace lost a game which they deserved to win.

At Palace, after such a devastating start, defeat upon defeat, things meanwhile have suddenly and spectacularly looked up. Perhaps just in time though there is a long hard road ahead. But that spectacular and wholly deserved win at home to a beleaguered Chelsea suggests that Roy Hodgson might just be able to turn things around.

Palace’s vibrant and fully merited win was above all the work of the two strikers, Ivory Coast’s Wilfried Zaha, in irresistible form, and the England international Andros Townsend, who surely deserves a recall to the colours after such an exhibition. All credit to Hodgson in deploying these two wingers as the pair of strikers. Zaha, badly short of match practice but gallantly competing till the end, despite encroaching exhaustion, likes in any case to wander across the face of attack.

In a time when England wingers are in such pitifully short supply, Townsend surely deserves a belated recall. He has 11 caps to his name and hardly let England down in the past.

Seven defeats in a disastrous row without a single goal scored looked as if Palace would be doomed. But on this scintillating form, Roy could rescue them and his tactics have been shrewdly thought out and fully vindicated.

On and on drags the complex case of Mark Sampson and the Football Association. This week, it has come before the Parliamentary select committee; one can only hope that they make more sense of it, subject as they and their principal have sometimes been of show boating, than the FA themselves.

A long and highly detailed account of the complex and baffling affair appeared in this week’s Sunday Telegraph yet bewilderingly, it failed to deal with a point I have raised in these columns before, namely that a salient figure, the black England women’s international and qualified lawyer Eni Aluka, was paid a hefty £80,000 by the FA. For what?

It seems clearly to have been some kind of compensation though since she is still pursuing her case against the FA, she hardly seems to feel compensated. Meanwhile, despite her numerous international caps and undoubted talents, she remains excluded from the England squad.